For Your Lenten Friday Night at the Movies V: Pope Francis’s Favorite Film… 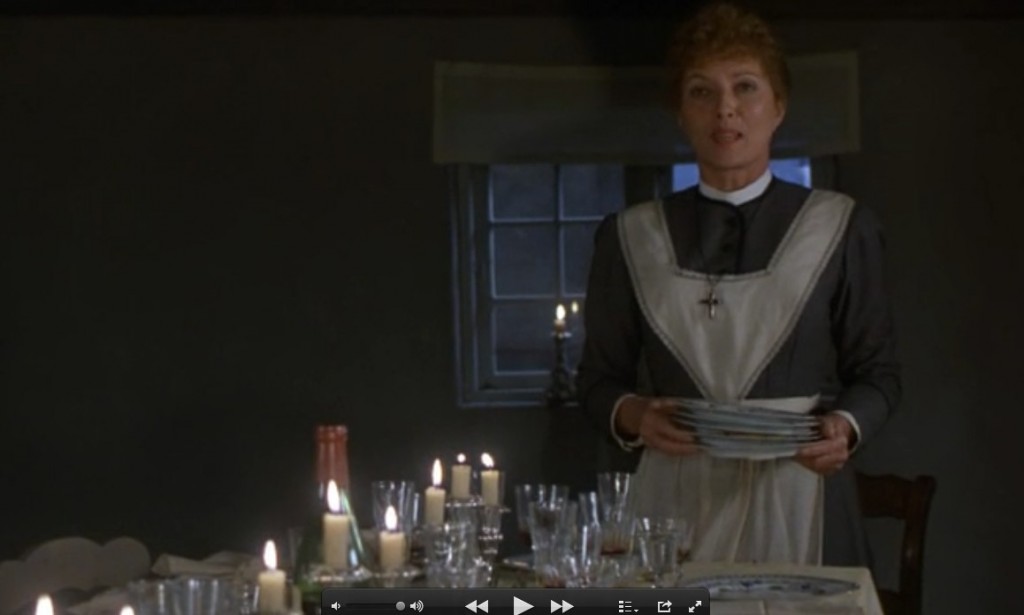 Truth be told, I almost featured this last week. But what with the conclave and all, I chose The Shoes of the Fisherman instead. I’m glad I did, too, as the inner workings of the voting, the making of smoke signals, and the naming of an unlikely Pope all kind of set the stage for the real thing that happened on Wednesday.

Fast forward through a heady week to today, and I found this little tidbit in a list of interesting facts about Pope Francis published by Bloomberg,

His favorite movie? “Babette’s Feast,” a 1987 Danish film based on a Karen Blixen story. It recounts the story of two austere, devoutly Christian spinsters transformed by the arrival of a French female chef in 19th-century Jutland.

Well looky there! I went right back to the public library and checked that DVD out as soon as Mass was over. ZING! Have a look at the trailer,

Steven D. Greydanus gives this film an A+ rating. Here’s a taste of his review,

Babette’s Feast is a feast in itself, for the heart, the senses, and above all the spirit. At the same time, unlike many food-themed films (cf. Like Water for Chocolate; Tortilla Soup), it isn’t a voluptuous or sensual affair. It’s sensitive, funny, hopeful, and ultimately joyous; but there’s a restrained, almost ascetical quality to it, especially in the first half. Even in the climactic feast, there is no collapse into epicurian dissolution or “food pornography.” Elevation, not mere gratification, is the goal of Babette’s Feast.

Behind the film’s deceptively simple story is a sort of parable or fable of religion and life. A voice-over narrator introduces us to a pair of aging sisters, daughters of a now-deceased Protestant minister on the Jutland coast of Denmark, whose names are Martina (Birgitte Federspiel) and Philippa (Bodil Kjer) — “after Martin Luther and his friend, Philip Melanchthon.”

These pious sisters lead quiet lives of touching service among their late father’s remaining followers, a handful of older residents of a tiny nineteenth-century coastal settlement that is at once almost a religious community and a sect unto itself.

The cast? You’ve never heard of any of them. 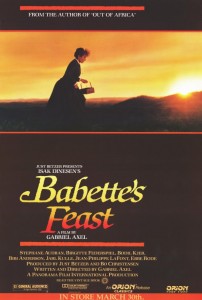 Did the film win any awards, you ask? Yep. It took home the Oscar for Best Foreign Film for 1987. Is it streaming anywhere? Yep. Try Hulu Plus, and Amazon.

Supper is Pescado al Horno, made with tilapia filets, and served over rice. And this shouldn’t surprise anyone now, but I’ll wash that down with my beer of record. Dessert? Nah…saving room for popcorn, while I enjoy this film with the whole family.

Join us, but please…silence your cell phones. 🙂

March 15, 2013
Among Other Things, Pope Francis Loved Dancing the Tango...
Next Post

March 16, 2013 What's In A Name? The Pope Tells Us In His Own Words
Recent Comments
0 | Leave a Comment
"Vaya con Dios, Leonard; Rest in Peace."
AnonCollie Leonard Nimoy Explains The Origin Of ..."
"Thank you for sharing"
Andy To Break My Fast from Being ..."
"I've seen Matt Maher live four times...twice since this song was released. I absolutely love ..."
Veritas81 WYD Flashback With Matt Maher, And ..."
"Yes, and Dolan should have corrected the scandalous and wrong decison of his predecessor when ..."
sixbunnies Archdiocese of New York Health Plan ..."
Browse Our Archives
get the latest from
Catholic
Sign up for our newsletter
POPULAR AT PATHEOS Catholic
1