Among Other Things, Pope Francis Loved Dancing the Tango…

Perhaps he could be the first Pontiff to cut the mustard on Dancing With The Stars. No one is asking my opinion, but I say pair him up with Cheryl Burke.

In a book length interview published back in 2010, entitled El Jesuita, authors Francesca Ambrogetti and Sergio Rubin coaxed this confession out of him,

BUENOS AIRES – Pope Francis, the first Argentine to rise to the throne of St Peter, loves tango and danced to the passionate South American music in his youth.

“I like it a lot. It’s something that comes from within me,” Jorge Mario Bergoglio said in an extensive 2010 interview published in the book “The Jesuit,” by Sergio Rubin and Francesca Ambrogetti.

In the interview, the then cardinal Bergoglio revealed himself to be a bit of a connoisseur of the history of the tango, the music that emerged from the poor barrios of Buenos Aires and Montevideo.

He said he was a fan of the great tango singers Carlos Gardel and Julio Sosa and the early 20th century orchestra of Juan D’Arienzo.

As a good pastor, he related the world of tango to that of religion in the interview, and expressed admiration for Ada Falcon, a famous tango dancer who left it behind to become a nun.

He also said he had fond memories of singer and composer Azucena Maizani.

“I gave Azucena extreme unction (in 1970). I knew her because we were neighbors,” he said.

Of the more contemporary tango scene, Bergoglio said he admired Astor Piazzolla, the Argentine composer and master of the bandoneon who is considered one of the greats of 20th century tango.

“Do you know how to dance tango?” Bergoglio was asked.

“Yes, I danced it as a young man, although I preferred the milonga,” he said, referring to the faster paced country music that was one of the early roots of tango.

The future pope said he had a girlfriend then, and they would go dancing together with a group of friends, but the romance ended “when I discovered my religious vocation.”
Source

For those of you who are fluent in Spanish, be the first to review of the book over at Goodreads.

Pope Francis was also a bouncer at a bar, back in the day. You have got to love that! For a few more interesting facts about Pope Francis, check out the list the Telegraph has scrounged up.

P.S. Did I mention he is frugal? 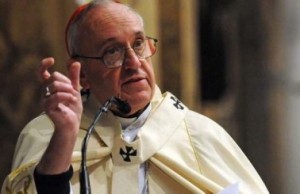 March 15, 2013 For Your Lenten Friday Night at the Movies V: Pope Francis's Favorite Film...
Recent Comments
0 | Leave a Comment
"Vaya con Dios, Leonard; Rest in Peace."
AnonCollie Leonard Nimoy Explains The Origin Of ..."
"Thank you for sharing"
Andy To Break My Fast from Being ..."
"I've seen Matt Maher live four times...twice since this song was released. I absolutely love ..."
Veritas81 WYD Flashback With Matt Maher, And ..."
"Yes, and Dolan should have corrected the scandalous and wrong decison of his predecessor when ..."
sixbunnies Archdiocese of New York Health Plan ..."
Browse Our Archives
get the latest from
Catholic
Sign up for our newsletter
POPULAR AT PATHEOS Catholic
1

To Deny Joe Biden Communion is...
Femina Ferox
Related posts from Why I Am Catholic