Jesuits “Lied for Jesus” About This Priest For 40 Years…UPDATED

It’s timely that I posted something earlier  about the sexual abuse scandals, whistleblowers, and how lying about them for Jesus has damaged the Church. And when I say Church, I mean the present, and future, faithful. Not the buildings, or the hierarchy. I mean the full Body of Christ in the world.

Manya Brachear of the Chicago Tribune has the scoop on how the headline above came to be from a story that hit the wires just a little while ago.

One letter written in 1970 by the Rev. John H. Reinke, then president of Loyola Academy in Wilmette, described McGuire’s presence at the school as “positively destructive and corrosive.” Instead of insisting he be removed from ministry or sent to treatment, he suggested a transfer to Loyola University.

“This whole situation has been so muddy and troublesome I just wanted to get it out of my mind from time to time,” wrote Reinke, who died in 2003. “Anyway, here it is, for the files and the record. … There is little hope of affecting any change. … He cannot be corrected.”

The documents contributed to a $19.6 million settlement between the Jesuits and six men from four different states announced Tuesday. With an average payout of $3 million per person, the amount per individual is the largest in the history of the U.S. Catholic sex abuse crisis, the victims’ lawyers said. The settlement and the documents add one more chapter to the still unfolding story of sex abuse in the church.

While the settlement of the lawsuit against the Chicago Province of the Society of Jesus doesn’t name any priests accused of abusing minors who have not been previously disclosed to the public, it does name a number of Jesuit superiors who for four decades kept McGuire’s crimes a secret and, the victims’ attorneys said, enabled him to abuse more young men.

To date, lawyers have identified 28 men who have alleged abuse by McGuire from the 1960s until 2004. Eight have filed lawsuits.

“Jesuits made choices time and time again that demonstrated willful indifference,” said Jeff Anderson, the plaintiffs’ attorney. “Not one Jesuit official has yet to be prosecuted for their complicity in these crimes.”

The Rev. Timothy Kesicki, who as Chicago provincial leads the area’s Jesuits, said in a statement that the order is “painfully aware” that it made mistakes and failed to protect children. Many steps have been implemented since 2007 to go above and beyond the policies to protect children passed by the U.S. Catholic bishops, said Jeremy Langford, a spokesman for the Chicago Jesuit province.

“More important, we failed to listen to those who came forward and to meet their courage in dealing with Donald McGuire as we should have,” said Kesicki, who has been promoted to lead the Jesuits’ national office next year. Lawyers for the victims commended Kesicki for understanding the failure of the order’s leadership in protecting children.

As former spiritual director for Mother Teresa and her Missionaries of Charity, McGuire offered Roman Catholic retreats around the globe.

Ah. Yes. It would have been shameful to have dealt with this particular malefactor in the way St. Peter approached Ananias and Sapphira, right? Directly, I mean. And by not disciplining this particular rockstar Jesuit in a manner that put the needs of the flock ahead of the wayward wolf preying upon it, folks got creative. Clever as snakes, they were. And innocent as the same. 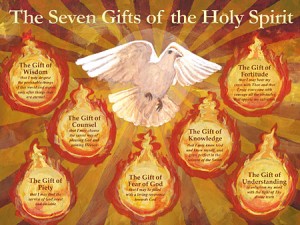 Forsaking the gifts of wisdom, fortitude, piety, and the rest of the gifts of the Holy Spirit, see, the Chicago Province took matters into their own hands. The same lie that Adam and Eve fell for ensnared the Jesuits in this case. And like all lies that stay hidden, it grew, and spread, and corrupted more and more folks who had to become complicit with it, as the original players in the plot to outfox, fool, trick, and outsmart the rest of us sheep passed on, or passed away.

Eventually, during the process of discovery for a lawsuit, the beach ball of deceit could no longer be held underwater.

In 2011, documents that Wisconsin prosecutors were told never existed began to surface that showed consecutive Jesuit provincials in Chicago had known the truth about McGuire for a while.

And lies begat more lies, as they are wont to do.

In 1998, the Chicago Archdiocese granted McGuire permission to serve in the archdiocese based on a glowing endorsement from his superior, the Rev. Richard Baumann.

“Specifically there is nothing to our knowledge in his background which would restrict any ministry with minors,” Baumann wrote.

Meanwhile, the bridge of trust, so important for evangelizing, and which had been built so strongly, and maintained so carefully, was willfully neglected, and allowed to fall into disrepair.  All because someone decided that it was more important to protect the reputation of the Church as an institution, than it was to maintain the actual health of the Body of Christ.

In their bid to be more Machiavellian, and less Catholic, you see, the Jesuits of the Chicago Province didn’t achieve the end that they hoped their means would obtain. Instead, they wound up outfoxing, out-fooling, out-tricking, and outsmarting themselves into a big ‘ol ground-zero sized crater, with a mushroom cloud of duplicity billowing above their heads.

And now, collectively, present and future generations suffer from the fallout.

Mark down another epic fail for the brilliant idea of lying for Jesus.

Kevin O’Brien:  The History of Lying

May 21, 2013
Meet the "Catholic Whistleblowers," Learn the Fate of Father Fugee, and Revisit "Lying for Jesus"
Next Post

Fr. Frank Pavone's Satanic Beatitudes
Chaos and Old Night
Related posts from Why I Am Catholic