Andrea Doria, Lepanto, and the Power of the Rosary 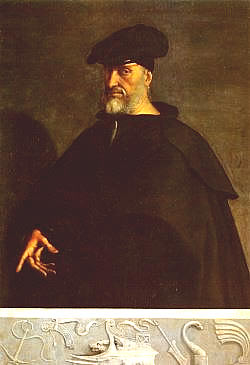 —Feast of Our Lady of the Rosary

When I was a kid, I really enjoyed reading history. Usually, I wasn’t reading the history that I was supposed to be reading in the classroom.  I really didn’t do that well in school until I served two hitches in the Marines and then decided to get out and go to college. Grade school and high school? Homework, schmomework!

When Christmas loomed in our house though, my mom knew what I was interested in and what presents to get me: military history books. Ships, planes, tanks, armies, navies and air forces were her sure-fire ticket to success for Frank. In one of those books I learned about the Andrea Doria.

The ironic thing is that this wasn’t a warship. But it was famous because of one of the most heroic stories of a rescue at sea, after a collision. The rescue was so impressive,  that it wound up in one of the books I was reading. It never, ever, occurred to me that Andrea Doria was a man, nor what importance he held in the history of Christendom, or in Western Civilization. I definitely had no idea what Our Lady of Guadalupe had to do with him either. I was a kid (a non-Catholic one, to boot), remember? I just figured it was just a girly name given to a cruise ship.

Now, though, I know better.

Today, you see, is the Feast of Our Lady of the Rosary. It used to be commemorated as the Feast of Our Lady of Victory, because on this date in the year of Our Lord 1571, the Battle of Lepanto was fought, and won, by a smaller, underdog coalition of European Christian forces, primarily Catholic and Orthodox, with a smattering of Protestant support, over the larger, and seemingly invincible forces of the Islamic Ottoman Empire, led by Ali Pasha. Giovanni Andrea Doria was one of the admirals fighting on the Christian side, in command of the Fortuna. The Christian forces were called the Holy League, and were under the command of Don John of Austria.

This may be news to you, but the Muslim sultans had been cleaning the clocks of Christian nations, and conquering the same, since Islam arose following the collapse of the Roman Empire. All that hoopla about the Crusades? Well, the Crusades were a military failure. And wherever the Islamic forces won, which they did early and often, Christianity, and most, if not all of the freedoms that grow out of the Faith, ceased to be.

But don’t take my word for it, crack open a history book or two or visit North Africa, Spain and Portugal. To me, though, the most interesting part of this war story is that while preparing for the battle, Admiral Dorea went down to his stateroom and prayed in front of a reproduction of the image of Our Lady of Guadalupe. You may recall that image appeared on a certain Mexican peasants’ tilma in the year 1531. And,

Andrea Doria had kept a copy of the miraculous image of our Our Lady of Guadalupe given to him by King Philip II of Spain in his ship’s state room.

After this prayer break, the wind turned in favor of the Christian allies, giving them advantages, the much sought after weather guage, which was detrimental to the Ottoman forces.  As a result, the undermanned, but heavily armed Christians, of the Holy League, defeated the Ottoman forces in a naval battle for the very first time.

Big deal? G.K. Chesterton thought so, as he wrote a great poem about this event. Does prayer make a difference? Pope St. Pius V thought so, because prior to the battle, he asked all of Europe to pray the Rosary to ensure victory. According to the Wikipedia citation,

The Holy League credited the victory to the Virgin Mary, whose intercession with God they had implored for victory through the use of the Rosary.

Take a look at the image below. 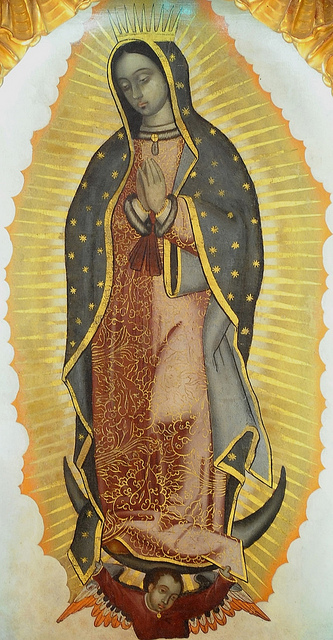 What is the Blessed Virgin standing on? Looks like a darkened crescent moon, yes? And in case you’ve forgotten about Lepanto, or you’ve never heard of it (more likely), I found this neat little video that helps bring the events commemorated today to life.

For more on Our Lady, the significance of this image, Lepanto, Fatima, the Rosary, Islam and what it all may mean, click on this link from the folks over at EWTN. And then check out Archbishop Fulton Sheen’s thoughts on this matter as well.

October 8, 2013 How Peyton Manning Made Me Think Of Pope Francis...
Recent Comments
2 Comments | Leave a Comment
Browse Our Archives
Follow Us!

One Friday In Lent, The Papacy...
Thin Places
Related posts from Why I Am Catholic