An Alabama Ministry Uses A Quote From Hitler On Their Billboard?

An Alabama Ministry Uses A Quote From Hitler On Their Billboard? June 4, 2014 Frank Weathers

Now why didn’t we think of that?*

A billboard at the Village Mall in Auburn, Ala., features five smiling kids beneath a quote from Adolf Hitler: “He alone, who owns the youth, gains the future.”

According to Lamar Advertising’s Montgomery office, the billboard was rented out by Life Savers Ministries, based in Opelika, Ala.

Hitler’s quote traces back to his speeches of the ’30s, and has historically been tied to the Nazi youth programs.

The billboard went up Friday and will be taken down Tuesday, per LSM’s request.

“We are pulling the billboard and certainly never intended to cause confusion. … Herbert Hoover would have been a far better one to quote when he said, ‘Children are our most valuable resource,'” founder James Anderegg told the Ledger-Enquirer. “We are a children’s organization and had honorable intentions and nothing less.”

A Hitler pull quote on a Christian billboard. What could be wrong with that? Tod Worner, my blog neighbor, might have an idea, or two. 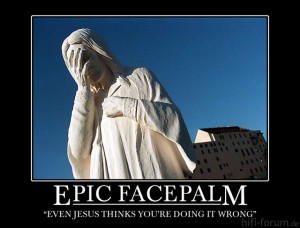 *Because that is all eat up in FAIL, that’s why.

June 4, 2014
On Hamlet, Our Sins, And The Man In The Mirror UPDATED
Next Post

June 5, 2014 The Monk's Life, In One Paragraph (A Few Thoughts For Thursday)
Browse Our Archives
get the latest from
Catholic
Sign up for our newsletter
POPULAR AT PATHEOS Catholic
1

The Jesus Prerogative: On Women Priests
The Latin Right
Related posts from Why I Am Catholic