St. John of the Cross On What Ails The Catholic Blog-O-Sphere

St. John of the Cross On What Ails The Catholic Blog-O-Sphere June 1, 2014 Frank Weathers

Last week was a pretty embarrassing one in the parish of St. Blogs. It was enough to make me consider if continuing to blog was a worthwhile use of my time. There are other things to do, you know. I have children to raise, a wife to love, tasks to be performed on my day job, and honey-do lists that are a mile long.

Yep, I seriously thought of throwing in the towel . What about the pay, you say? Meh. That’s a pageview related kind of thing. Nobody reads Joe Six-Pack.

So, the thought of bagging it crossed my mind for a variety of reasons, least of all because some folks are coming unglued due to their constant fretting about Pope Francis. No, it was more personal than that. I was going through a dark night of the blogger’s soul mainly because there are just so many talented and devoted folks here hammering away on their keyboards for the Patheos Catholic channel, that I was starting to wonder if a better use of my time might be to just sit at their feet and soak in what they are writing. Because if I know one thing for sure, it’s that I’m a mere grasshopper on a pilgrimage.

Why I Am Catholic is not the be all, and end all of Catholic knowledge and practice, you see? Of course you do.

And then Pope Francis kissed some hands, and personal Facebook pages went wild. You don’t need me to recap the situation for you, because others do that ably, both outside the walls of Patheos as well as within. Suffice it to say that the level of mudslinging that ensued (by all the parties involved) was pretty much at the grade school level of juvenile. The explosion was the straw that was pretty close to breaking this blogger’s back, and a little voice whispered, “Why not just wrap it up at the end of May, and say ‘Bag this, I’m outta here.’ Why bother continuing blogging on into June?”

That was last night, after which I took a long walk and said a few prayers while working up a sweat. Then I got a beer from the fridge and went to my oldest son’s room for a reason that I’m not quite sure of. See, he left on a post-graduation trip to Colorado for a week on Friday, and I reckon I just missed him being around. I saw that he had made his bed before he left, and the floor was picked up, which is good. And then I wandered by the little bookshelf that is built into the wall, and spied books that I had stored there back when it had been the guest room.

I picked up the paperback copy of St. John of the Cross’s, Dark Night of the Soul, noting that the bookmark was right where I had left off, about halfway through. I thumbed through it briefly before going to bed, noting that I could barely make out some evidence that I had highlighted a few lines here, and there. This morning,  I started it off anew, with a fresh perspective, while sipping a hot cup of coffee, sitting underneath my chestnut tree in the backyard.

If you aren’t familiar with this book, here’s the skinny on it. John, pals with Teresa of Avila, wrote a short poem that became a Christian classic. But just so folks didn’t go and decide for themselves what the poem meant, John went one step further and wrote a book explaining what the poem means in terms of the life of a Christian who is called to prayer. Just FYI, all Christians are called to a life of prayer, though not all are gifted with the graces that God showered on John and Teresa.

Anyway, as I was meandering through my own little version of a dark night, I got to chapter two and realized that ‘ol John was one smart cookie. Heck, he’d been around religious folks long enough to have seen it all. You know he was kidnapped by his brothers once, right? Locked up tighter than a drum? Yeah, he has seen it all. Nothing us lay Catholic bloggers are doing surprises him one little bit. According to John, see, what happened last week in the Catholic blogging world is all one big rookie mistake. Can you see it too? It’s pretty apparent in the chapter’s title and the first six paragraphs.

Ch 2. Some of the imperfections of pride possessed by beginners. 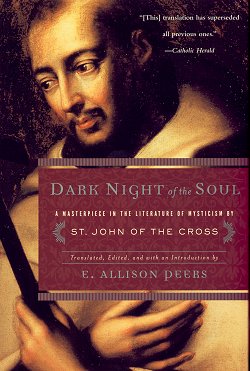 These beginners feel so fervent and diligent in their spiritual exercises and undertakings that a certain kind of secret pride is generated in them that begets a complacency with themselves and their accomplishments, even though holy works do of their very nature cause humility. Then they develop a somewhat vain – at times very vain – desire to speak of spiritual things in others’ presence, and sometimes even to instruct rather than be instructed; in their hearts they condemn others who do not seem to have the kind of devotion they would like them to have, and sometimes they give expression to this criticism like the pharisee who despised the publican while he boasted and praised God for the good deeds he himself accomplished [Lk. 18:11-12].

The devil, desiring the growth of pride and presumption in these beginners, often increases their fervor and readiness to perform such works, and other ones, too. For he is quite aware that all these works and virtues are not only worthless for them, but even become vices. Some of these persons become so evil-minded that they do not want anyone except themselves to appear holy; and so by both word and deed they condemn and detract others whenever the occasion arises, seeing the little splinter in their brother’s eye and failing to consider the wooden beam in their own eye [Mt. 7:3]; they strain at the other’s gnat and swallow their own camel [Mt. 23:24].

And when at times their spiritual directors, their confessors, or their superiors disapprove their spirit and method of procedure, they feel that these directors do not understand, or perhaps that this failure to approve derives from a lack of holiness, since they want these directors to regard their conduct with esteem and praise. So they quickly search for some other spiritual advisor more to their liking, someone who will congratulate them and be impressed by their deeds; and they flee, as they would death, those who attempt to place them on the safe road by forbidding these things – and sometimes they even become hostile toward such spiritual directors. Frequently, in their presumption, they make many resolutions but accomplish very little. Sometimes they want others to recognize their spirit and devotion, and as a result occasionally contrive to make some manifestations of it, such as movements, sighs, and other ceremonies; sometimes, with the assistance of the devil, they experience raptures, more often in public than in private, and they are quite pleased, and often eager, for others to take notice of these.

Many want to be the favorites of their confessors, and thus they are consumed by a thousand envies and disquietudes. Embarrassment forbids them from relating their sins clearly, lest their reputation diminish in their confessor’s eyes. They confess their sins in the most favorable light so as to appear better than they actually are, and thus they approach the confessional to excuse themselves rather than accuse themselves. Sometimes they confess the evil things they do to a different confessor so that their own confessor might think they commit no sins at all. Therefore, in their desire to appear holy, they enjoy relating their good behavior to their confessor, and in such careful terms that these good deeds appear greater than they actually are. It would be more humble of them, as we will point out later, to make light of the good they do and to wish that no one, neither their confessor nor anybody else, should consider it of any importance at all.

Sometimes they minimize their faults, and at other times they become discouraged by them, since they felt they were already saints, and they become impatient and angry with themselves, which is yet another fault.

They dislike praising anyone else, but they love to receive praise, and sometimes they even seek it. In this they resemble the foolish virgins who had to seek oil from others when their own lamps were extinguished [Mt. 25:8].

The number of these imperfections is serious in some people and causes them a good deal of harm. Some have fewer, some have more, and yet others have little more than the first movements toward them. But there are scarcely any beginners who at the time of their initial fervor do not fall victim to some of these imperfections.

You can read the rest of the chapter, you know, where he describes the more appropriate way to travel, right here. Or if you’d like the version that is in my own library, go here: Dark Night Of The Soul – A Masterpiece In The Literature Of Mysticism

And in case you didn’t notice, it’s June 1st, and I’m still blogging. So when you come around the Patheos Catholic channel, checking out all the heavy hitters,  kid geniuses, the French guy, the post-doctoral superstars, and the rest of the crew, don’t you forget about me, umkay? But more importantly, don’t forget about Christ, and our mission to spread His Good News.

May 29, 2014
Napoleon Bonaparte: The Portrait of The Unintentional Disciple As A Young Man
Next Post

June 2, 2014 Miraculous Proof That God Loves Mustangs More Than Camaros...
Browse Our Archives
get the latest from
Catholic
Sign up for our newsletter
POPULAR AT PATHEOS Catholic
1

What Not to Say to a...
Steel Magnificat
Related posts from Why I Am Catholic