“Brothers, I call upon you in the name of humanity, rescue us!”

“Brothers, I call upon you in the name of humanity, rescue us!” August 7, 2014 Frank Weathers

Yesterday, the Catholic Church as a whole set aside a day of prayer for the beleaguered parts of the body of Christ that are being assaulted by ISIS. If you’ve been paying any attention to the posts of The Anchoress, you’re well aware of what is going on.

Praying for a change of heart of those who twist Islam to their own ends is a worthy use of your time. Demanding action by the international community is another.

The video below is a good indication of why the lack of urgency on the part of the United Nations Security Council to snap out of it is, in a word, unconscionable. Because Christians aren’t the only ones facing the sword as ISIS rumbles through the countryside.

Here, an Iraqi member of parliament who is a member of the Yazidi religious minority makes an impassioned plea for justice. Roll clip. http://youtu.be/JNoP-tQ5mCw

Crickets are chirping over at the UN Security Council’s website. No mention of the horror that is unfolding throughout Syria and Iraq. No impending meetings are on the docket to declare an emergency and send UN peacekeeping troops to the region. At least the UN is warning of a humanitarian tragedy, so it’s not like they are ignorant of what is happening.

Canon Andrew White, the Anglican vicar of St. George’s Church in Baghdad, where he has served since 2005, has a few choice words about the situation there eight hours ago.

The Massacre of all continues.

We are now in Erbil supporting to various church leaders here. The Yazidis have now come under huge attack. This group is similar to the Zoroastrians and at the best of times they are a discriminated and despised minority. What we have heard from some of the Church leaders is more than horrendous. Just like last week a felt I could not show the pictures so today I fell I cannot tell the whole story especially about the children.

Now they head toward Erbil.

This is supposed to be the one safe area in Iraq but yesterday evening the whole of Erbil went into total panic with news that ISIS was moving towards Erbil. It is not here yet but it may indeed be on its way.

Meanwhile over a hundred people where killed in Baghdad last night. There is one other person here doing what we are doing with his wife. Dr Plumb and his wife Peggy are both in their late 70’s, they are Mormons have been here several months using all their own money. He is our closest friend here. All the time people say to me how can you work with a Mormorn. Well he is the only other person here doing the work of Jesus caring for the poor and the dying and we love each other.

The Catholic Near East Welfare Association (CNEWA) is taking donations, and delivering much needed aid to all in the region who flee from those hell bent on their destruction. Give if you can, and pray for an end to this madness. St. George, revered by Christians and Muslims alike, pray for us! 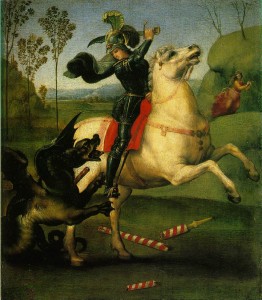 August 7, 2014 ISIS: Modern Day Iconoclasts Bent On Cleansing Islam Of Idolatry
Browse Our Archives
get the latest from
Catholic
Sign up for our newsletter
POPULAR AT PATHEOS Catholic
1

Fetal Cell Lines Are Not Continual...
Through Catholic Lenses
Related posts from Why I Am Catholic