Latest News From The Church Of God Without God…UPDATED

Actually, depending how you look at it, this news is either four years old, or ever new. Over at the Atheist Channel, Rational Doubt runs an op-ed of a Rabbi of Humanistic Judaism (?) whose thoughts run to the idea that we have found the problem, and it is the Word of God.

Here’s the Readers Digest Condensed version of the post,

…the problem does not lie with how we interpret the book. The problem is the book.

Sounds like something ol’ Hazel Motes can get behind! Remember Hazel and his Church Of God Without Christ? Flannery O’Connor brought him to life on the pages of Wise Blood

, and director John Huston brought him to life on the big screen.

Idea: Instead of tossing the Holy Scriptures into the dustbin of history, you just might want to learn which church is aces at making sense of the text, and applying it to the lives of the faithful. You can probably guess which church I think that is.

This crazy, and admittedly faith-filled, notion reminds me of something I read recently,

“Catholic moral teaching is not a mere code of prescriptions and prohibitions. It is not something that the Church teaches merely to keep people obedient, doing violence to their freedom. Rather, Catholic morality is a response to the aspirations of the human heart for truth and goodness. As such, it offers guidelines that when followed will make these aspirations grow and become strong under the warm light of the Gospel. Catholic morality is not by nature oppressive: nor is it in principle conservative. It seeks to educate for growth. This is its true mission.”

As it turns out, Rational Doubt is a blog for pastors (and religious, and for seekers who no longer seek?) who have doubts enough that they might still hold down their day job as a shepherd of souls, but they have thrown in the towel on believing in God themselves.

It is interesting to me that Rational Doubt is such a misnamed blog. Backed by the folks at the also misnamed Clergy Project, Supernatural Doubt (with voices from the Leave the Clergy Project) would have been more truthful.

Personal doubts rise and fall as we mark our steps along the Way. Clergy who have lost their sense of the sacred, and of the supernatural destiny of their own souls, and the souls of their charges, have strayed from the flock. At the risk of again turning to the wisdom of the scriptures, I’ll share the passage from yesterday’s Old Testament reading for the Feast of Christ the King (of the Universe),

Thus says the Lord GOD:
I myself will look after and tend my sheep.
As a shepherd tends his flock
when he finds himself among his scattered sheep,
so will I tend my sheep.
I will rescue them from every place where they were scattered
when it was cloudy and dark.
I myself will pasture my sheep;
I myself will give them rest, says the Lord GOD.
The lost I will seek out,
the strayed I will bring back,
the injured I will bind up,
the sick I will heal,
but the sleek and the strong I will destroy,
shepherding them rightly.

Don’t throw in the towel. Come to the oasis where the waters welling up to everlasting life flow.

Because We Are A Bible-Believing Church, Part I, Part II, and Part III.

From the Treasure Chest: “Difficulties of Private Interpretation.”

Inebriate Me, Deeper thoughts on  What is “Biblical Morality?” 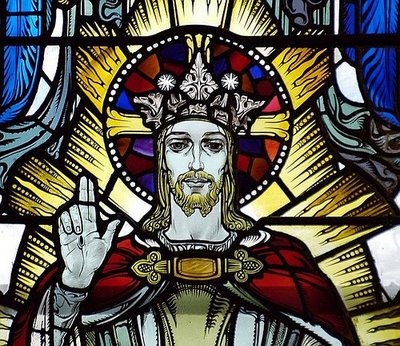 November 25, 2014 Oftentimes, The Best Blog Post Is The One With The Fewest Words...
Browse Our Archives
Follow Us!