Thoughts On Torture Occasioned By Mass At The Garden Of Gethsemane UPDATED December 15, 2014 Frank Weathers

My wife and I have arrived home safe and sound from our pilgrimage trip to the Holy Land. While we were away these past two weeks, I haven’t read a newspaper or watched a television. Internet access was spotty, and even when it wasn’t the spirit to blog was willing, but the body was too weak to allow writing when sleep beckoned. I did post a few times, and as such I learned of the Senate Intelligence Committee report on torture used by the CIA.

As you might imagine, I did not read the report while I was on pilgrimage. Having never been a fan of “enhanced interrogation techniques” in the first place, I was glad to see how utterly unproductive their use is, while profoundly saddened that we stooped to using them at all.

Thank God we came to our senses and stopped the madness!

Why anyone would attempt to justify their use is, frankly, beyond me. I can assure you that as one who wore the uniform proudly, I would never condone torturing captives in any way, shape, or form. There is a little passage from the Sermon on the Mount, see, wherein Jesus shared this insight with the crowds,

“You have heard that it was said, ‘You shall love your neighbor and hate your enemy. But I say to you, love your enemies, and pray for those who persecute you, that you may be children of your heavenly Father, for he makes his sun rise on the bad and the good, and causes rain to fall on the just and the unjust. For if you love those who love you, what recompense will you have? Do not the tax collectors do the same? And if you greet your brothers only, what is unusual about that? Do not the pagans do the same? So be perfect, just as your heavenly Father is perfect.

Gulp. That reminds me of another passage I read in the same thin volume that admonished us to walk the walk, and not just talk the talk.

On the tenth day of our pilgrimage, as this news was spreading across the globe, Mass was celebrated in the Church Of All Nations over the site where Jesus endured His agony in the garden.

Looking upon the artwork that graced the walls and ceiling of the modern church, I couldn’t help thinking that Judas’s betrayal of Jesus was similar to our betrayal of the values that the United States has always held in high esteem. Values that are in keeping with what Our Lord and Savior taught us in the passage highlighted above.

As we entered the church, I was struck by the beauty of the ceilings. In the back of the church near the confessionals, the ceiling was of particular interest to me, as the great seal of the United States of America figured prominently upon it. 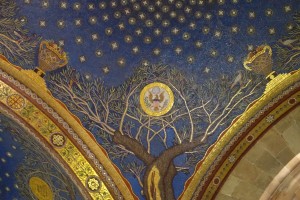 Despite this lapse in judgement by people who should have known better, I have not given in to despair and remorse for loving my country. To do so would be to give power to the few who have abused our trust, while ignoring the important work of the many who did not. It would be akin to losing faith in the Church because of the failures of the few priests who abused children sexually while the vast majority did nothing of the kind.

No. But as doers of the word, and not hearers only, we have to be sure we are not content to be sleeping saints. After almost every Mass that he celebrated with us, Archbishop Dennis Schnurr would use the following exhortation for the concluding rite,

Go in peace, glorifying the Lord by your life.

Amen. And to do so takes moral courage. The courage to go against the stream that others may urge us to float along with. This is our vocation as Christians across the entire spectrum of our actions: stay awake, and glorify the Lord.

May the saints pray for us for the strength to do just that.

Jonathan Ryan has C.S. Lewis inspired thoughts in Dick Cheney is the White Witch of Narnia (and so is any Christian who agrees with him on torture).

*All photographs belong to the author.

December 10, 2014
What I Saw In Bethlehem Yesterday (A Photo Essay)
Next Post

December 16, 2014 The Right Way To Interrogate Enemy Prisoners Of War, Courtesy Of A Marine Who Was A Missionary UPDATED
Browse Our Archives
get the latest from
Catholic
Sign up for our newsletter
POPULAR AT PATHEOS Catholic
1