For The Unshakeable Faith Of The Families Of The Egyptian Martyrs

For The Unshakeable Faith Of The Families Of The Egyptian Martyrs March 31, 2015 Frank Weathers

Having a look at the photo gallery of National Geographic’s article, Portraits Capture Unexpected Reactions to ISIS Beheadings, I couldn’t help but be reminded of the words Jesus said to the eleven at the Last Supper, right before he began what is known as the High Priestly Prayer,

In the world you will have trouble, but take courage, I have conquered the world.

The families of the Egyptian Martyrs are still being tested, as this news item from a few days ago attests.

As the commemorative mass for the 21 Christians beheaded by ISIS in Libya was held on the 40th day after their deaths in the village of Al Our in the Minya region of Upper Egypt this past Friday, a mob identified by witnesses as Muslim Brotherhood protestors attacked the home of one of the martyr’s families, set fire to the car of one of the mourners, and later lobbed molotov cocktails at the site of the church being constructed in their memory. Al Our village was the home of 13 of the Egyptian Coptic martyrs.

Our Lord reminds us again that,

Peace I leave with you; my peace I give to you. Not as the world gives do I give it to you. Do not let your hearts be troubled or afraid. 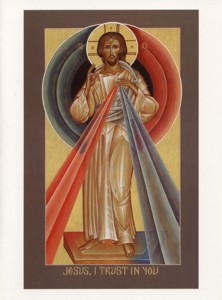 March 30, 2015
If The World Is Trying To Distract You, Then It's Probably Holy Week
Next Post

April 1, 2015 Indiana Bishops Release Statement On Indiana's Religious Freedom Restoration Act
Browse Our Archives
get the latest from
Catholic
Sign up for our newsletter
POPULAR AT PATHEOS Catholic
1