If The World Is Trying To Distract You, Then It’s Probably Holy Week

If The World Is Trying To Distract You, Then It’s Probably Holy Week March 30, 2015 Frank Weathers

Oh, look at the calendar! It IS Holy Week.

So right when you’d really like to settle your gaze on Jesus, meditate over the mystery of the Incarnation, sing praises that your sins have been forgiven, and that death has been conquered for all time, the cacophony of the crowd rises to a fever pitch trying to make you forget all that “repent and believe the gospel” stuff Jesus proclaimed, and instead worry about all the stuff that is as far flung from the Good News as Pluto is from Mercury.

It was just like this after Palm Sunday back in the day, too. Then, as now, the temporal concerns were given priority, and the hoped for uprising didn’t come because the “Messiah” sat on his hands, and lo and behold, the crowd went mad and screamed that they preferred Barabbas  to the fellow who made the lame walk, who gave sight to the blind, and who fed the multitudes (with baskets leftover). Good thing, too, according to the folks of the Sanhedrin, because it would be better for one, lone, boat-rocker to die than for an entire country to perish. Right?

And so the internet is exploding with faux concerns touted vociferously by folks who have actually hedged away most of the risk (that they might bear) to the point of having close to zero skin in the game. From what I’ve seen on social media over the weekend, the things that are supposed to be keeping me up at night have been A) Saudi Arabia bombing rebels in Yemen (OMG, someone else is playing policeman of the Middle East!!!), and B) INDIANA is persecuting teh Gays!!!

Joe Six-Pack ain’t buying it. To my everlasting gratitude, better folks than me aren’t buying it either, and they’re writing about it here, here, here, and here. While others are screaming for us to “Crucify him! Crucify him!, ” I’m going to do what Sun Tzu would do during Holy Week. I’m not going to be distracted. In fact, I’m going to take something on, and I invite you to follow me if it suits you.

The task? I’m praying the Liturgy of the Hours, all Holy Week long. Not just the Office of Readings, or just the Morning Prayer (Lauds), but the whole megillah, morning, noon, and night. You can too, for absolutely no cost but the time well spent on prayer that is centered around Christ’s paschal sacrifice. It will be hard for you not to notice that, as you pray the Prayer of the Church this week.

I’d love to explain this to you in more depth, but I’ve got to go pray Compline (the Night Prayer) instead. Head over to Universalis, bookmark their page, or pick up their app, and start praying the LOTH with me this week. The perspective you gain by doing so might just be life-changing.

Put the distractions behind you, and focus on the LORD. 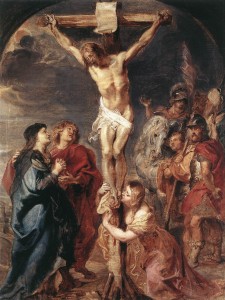 March 29, 2015
Because Christ Came to Occupy, and Reclaim, the World
Next Post

March 31, 2015 For The Unshakeable Faith Of The Families Of The Egyptian Martyrs
Browse Our Archives
get the latest from
Catholic
Sign up for our newsletter
POPULAR AT PATHEOS Catholic
1