For the Pause That Refreshes: Thoughts of the Desert Fathers on Living In Harmony

For the Pause That Refreshes: Thoughts of the Desert Fathers on Living In Harmony April 6, 2015 Frank Weathers

A while back, I shared some brief thoughts on God by St. Augustine and a lesser know Dominican named Luis de Granada. Short passages they may have been, but they were formulated from swimming in deep waters. The same can be said of the thoughts of the hermits who fled to the deserts of Egypt around the time the Church ceased to be persecuted.

What follows is from Benedicta Ward’s The Paradise of the Desert Fathers in the section titled God is For All. Food for thought from anonymous hermits who were wise to the ways of the world, and who went out of their way to avoid the traps laid for us there by the Adversary.

First up, a short passage that is a summation of the Good News regarding the manifest destiny of all of us.

God is the life of all free beings. He is the salvation of all, of believers or unbelievers, of the just or the unjust, of the pious or the impious, of those freed from passions or those caught up in them, of monks or those living in the world, of the educated and the illiterate, of the healthy and the sick, of the young or the old. He is like the outpouring of light, the glimpse of the sun, or the changes of the weather which are the same for everyone without exception.

And now a little story as an example, 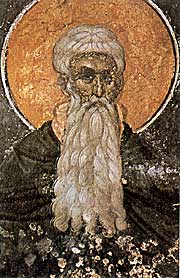 There was an old man living in the desert who served God for so many years and he said, “Lord, let me know if I have pleased you.”

He saw an angel who said to him, “You have not yet become like the gardener in such and such place.”

The old man marveled and said, “I will go off to the city to see both him and what it is that he does that surpasses all my work and toil of all these years.”

So he went to the city and asked the gardener about his way of life…. When they were getting ready to eat in the evening, the old man heard people singing in the streets, for the cell of the gardener was in a public place. Therefore the old man said to him,

“Brother, wanting as you do to live according to God, how do you remain in this place and not be troubled when you hear them singing these songs?”

The man said, “I tell you, abba, I have never been troubled or scandalized.”

When he heard this the old man said, “What, then, do you think in your heart when you hear these things?”

And he replied, “That they are all going into the Kingdom.”

When he heard this, the old man marveled and said, “This is the practice which surpasses my labor of all these years.”

You know the minute I think I have an inkling about what it means to live the Christian life, I’m reminded that “the spirit is willing, but the flesh is weak.”  St. Thomas Aquinas expounded on this a bit in his treatise on the Perfection of the Spiritual Life. To wit,

This perfect mode of love is not possible to those who are on the way to Heaven, but only to those who have reached their goal. Hence, St. Paul writing to the Philippians says (chap. iii. 12), “Not as though I had already attained, or were already perfect; but I follow after, if I may by any means apprehend.”

He writes as if he were hoping for perfection when he should have reached his goal, and when he should have received the palm of the blessed. But St. Paul does not use the word “attaining” in the sense of entire possession or perfect comprehension, for God in this sense is incomprehensible to every creature. By “attaining” he means reaching the end which he has been following and seeking.

In Heaven, the understanding and the will of every rational creature is turned to God; since it is in the fruition of the Godhead that the beatitude of Heaven consists. For beatitude exists not in habit, but in act. And, since the rational creature will in Heaven cleave to God, the Supreme Truth, as to its last End, all its activities will, by intention, likewise be directed to that Last End, and will all be disposed towards the attainment of that End.

“For beatitude exists not in habit, but in act.” Now there is a saying for me to commit to memory. Thank you, Saint Thomas.

April 3, 2015
Steven D. Greydanus Recommends "The Miracle Maker," And I Found A Place Where It's Streaming...
Next Post

April 8, 2015 Just Bake The Cake! Just Deliver The Beer! What's The Crucial Difference?
Browse Our Archives
get the latest from
Catholic
Sign up for our newsletter
POPULAR AT PATHEOS Catholic
1