It’s Easter Sunday In Amman, So I Slept In. What Happened Next Is Incredible…UPDATED

It’s Easter Sunday In Amman, So I Slept In. What Happened Next Is Incredible…UPDATED April 12, 2015 Frank Weathers

As you all should realize by now, a few of us from the Patheos Catholic Channel, and a handful of other religious bloggers, are visiting the Hashemite Kingdom of Jordan.

We left the States late in the evening on Thursday, arrived late in the afternoon on Friday, ate dinner out, hit the rack, and then woke up early on Saturday to head up to Umm Qais, where I made the new friend you see in the photograph above. Idea! Check out our nifty, Jordan Tourism Board sponsored, videolog!

The soundtrack in the above clip is courtesy of a band of school boys, who were having an absolute blast traipsing along the stone streets of the ancient city near where Jesus granted the demons their wishes, and sent them into a herd of swine. The Gadarenes were not amused, recall.

Later that evening was the Easter Vigil, as all the churches in the area utilize the same calendar as the Eastern Orthodox Church. Why? It keeps things simple, as Easter Sunday is a public holiday for the minority Christians living in Jordan, where the workweek is Sunday thru Thursday. Saavy? I was just happy to be able to celebrate Easter twice in one year. I didn’t have to wash any dishes this time, either.

As my colleagues here at Patheos (and at other venues), have written about, we had a very uplifting, and faith-filled, evening celebrating Our Risen Savior’s conquering of death for us all.

After Mass (we participated in a Roman Catholic Mass partially, realized we were in the wrong parish, and then zipped over to the Greek Melkite Catholic parish for the rest of our obligation), we visited with the pastor, enjoyed a cup of tea, ate boiled Easter eggs, and Cadbury chocolate ones too. Their long Lent of fasting was over, and it was time to eat and be merry. We got back to the hotel kind of late, happy, but tired.

So come Sunday morning, when the itinerary called for us to rise, shine, and head to another Easter mass with a ship out time of 08:00, I did the only thing that a jet lagged traveler could do.

I hit the snooze button when the alarm went off at 07:00, and had a change of plans.

Truly, the spirit was willing, but the flesh was weak.

My phone buzzed me again around 8:25 with a “Are you coming to Mass with us?” message from Diana von Glahn, and I replied,

I’d fulfilled my Sunday, and Easter, obligation, so there was no reason to feel guilty. But now that I’d missed the chance to worship at another parish, I figured I’d better get up, shower, grab some breakfast, and see what I would do while the others were away.

I started off breakfast with a test for the cook manning the “eggs made to order” bar. Yes, when I order fried eggs over medium, I am judging you. The cook at the Sheraton Amman Al Nabil Hotel passed this test with flying colors, as you can see here. It was looking like it would be a good day.

After eating the eggs, and washing down a bowl of oatmeal with a couple of cups of coffee, I headed to the pool deck to see what the view had to offer. Skyscraper construction projects, mostly. And as it is like a Monday, the jack hammers, cement mixers, and cranes were in full swing.

Time for a brief weather report. It’s been unseasonably cool since we arrived, and today, well, let’s just say that folks in California would be envious. Not of the cold, sure, but of the rain. The Jordanian aquifers are being replenished. Coming off the rainy winter season, the green fields are apt to get even greener out in the countryside. 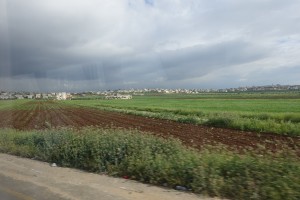 Oh, you thought Jordan was just a desert dust bowl? Didn’t we all, before seeing fields like these? I mean, this looks like Ireland, or East Tennessee, doesn’t it?

If it was a parched earth, croaking for moisture, then how would the Hashemite Kingdom export 2,100 tons of produce daily? As for the cool weather, well, today the mercury only made it up to the low 40’s. And the wind chill? Just look at the ripples on the pool.

But none of us were complaining about the weather, mind you. Besides, there’s an indoor pool for swimmers. Intrepid travelers don’t sit around their hotels and mope about the weather when there are interesting sights to see, and great people to meet.  It was about right then that I took this photograph, where I saw something close by that looked worthy of further investigation.

By now, it was about 10:30 AM.  As it turns out, the others in our group weren’t able to attend Mass after all. Something about a mix up in addresses. Max Lindenman has the details, as well as a neat recap of their meeting with a Christian Iraqi refugee named Zaid.

When the others informed me that their Easter joy was cut short, I informed them that I have a sixth sense about things like that happening (*cough*).  I then announced that I was going to walk over to the church I spotted yonder from my window.

I had two takers: Diana von Glahn and Denise Johnson-Bossert. A few sprinkles weren’t going to stop us. And at the very least, we figured we could at least get some nice exterior shots of the church. We set off through the winding streets of Amman. Heck, it was basically straight, hang a dog-leg right, and then a 90% lefthand turn. I’m thinking it was 1000 yards, at most.

Oh bother! I need to catch some winks before we head up to Jerash to see that magnificent Decapolis I visited back in December. More tomorrow, I promise.

Keep us pilgrims in your prayers, por favor. 🙂

*Note: Every single photograph here belongs to the author. If you use them without my permission, I will find you, and my legal team will then sue you all the way back to the Stone Age. That is all.

PART II: What We Discovered!

April 10, 2015
A Little Film I Watched About Where Jesus Was Baptized In Jordan...
Next Post

April 14, 2015 The Little Part I Played In A (Minor) Miracle In Jordan...
Browse Our Archives
get the latest from
Catholic
Sign up for our newsletter
POPULAR AT PATHEOS Catholic
1

The Woes of “Matthew”—Jesus Wasn’t Nice!
Messy Inspirations
Related posts from Why I Am Catholic