CD Review: Angel at the Crossroads, by High Road III 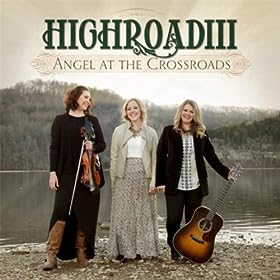 Sara Davison, Kiley Phillips, and Anna Grace Kimbrough, the ladies of High Road III, burst on my radar when they performed their original song “High Road” at NQC the other year. I thought to myself at the time, “These ladies are going places!”  Angel at the Crossroads is their sophomore release, and judging by the heavyweights involved in the production (Ben Isaacs, Bill Gaither), it looks like the rest of the industry is sitting up and taking notice too. The album was recorded at Ricky Skaggs’ studio in Hendersonville, TN, with all the instruments played by the ladies except drums (Greg Ritchie) and banjo/mandolin (Andy Leftwich).

*Ben Isaacs. When I want rich, interesting music in southern gospel, I know I need look no further than “produced by Ben Isaacs.” Whether working with the Isaacs, Wilburn & Wilburn, or  the Gaither Vocal Band, Ben consistently satisfies the pickiest music connoisseur. Not surprisingly, this project sounds very similar to something the Isaacs would put out. In fact, if you weren’t intimately familiar with either group, you could easily mistake the two groups’ ladies for each other. Bill Gaither even guest “boom-booms” on “When God Dips His Love.”

*Of course, Ben is ultimately just refining the already impressive musicality these ladies bring to the table. Unlike some artists, their live performances sound exactly like the studio. They hold impressive credentials from the Belmont School of Music, bringing an astonishing confidence and polish to their vocals and instrumentals. It’s rare to find a young group that plays, sings and writes at this level in Southern Gospel, where it typically takes years to work your way up into the big leagues.  Although Sarah primarily plays piano, while Anna Grace plays fiddle and Kylie plays guitar, the girls are multi-instrumentalists. This quote from an interview with Anna Grace says all you need to know about their level of musical experience: “I’ve been playing piano since I was young and violin since I was five.”

*The title track is the clear standout. Inverting the “devil at the crossroads” trope, the ladies pray instead for an angel’s guidance. It was written by Nashville tunesmiths Kaci Bolls and Brian James:

*Among the covers, lesser-known neo-roots tune “Walk Beside Me” is especially impressive. The original can be heard on folk musicians Tim O’Brien and Darrell Scott’s album Real Time. I like how first the GVB with “Cup of Sorrow” (Amos Lee) and now High Road are highlighting top-shelf contemporary folk music within southern gospel.

*The girls contributed at least two originals that hold up well: “Worry” is an up-tempo crackler with a Cajun flair, while “Don’t You Weep For Me” is a heaven ballad with a haunting Alison Krauss feel. There are a couple others on the album that they may also have contributed, but I can’t find songwriting credits for all of them.

*One of the latter is “Prayer Chain,” a cheeky novelty song that had me chuckling on first listen. It lovingly pokes fun at those “prayer warriors” who jump to conclusions without sufficient information:

I was out running wild.

I was great with child.

*A third of the album is filled with well-worn standards (“Count Your Blessings,” “Beulah Land,” “My Savior’s Love,” “When God Dips His Love,” and the worship favorite “Redeemer”). All beautifully performed, of course, but one is left feeling like there’s not quite enough original music. However, the violin intro to “Beulah Land” is quite lovely, and it prompted MusicScribe’s Steve Eaton to suggest that this track might have been even better as an instrumental.

* “Jesus Built a Bridge to Heaven” ends a little abruptly. I thought there was more musical goodness to be mined there with an extended jam session.

*Among the originals, nothing really matches the power and emotional punch of the group’s titular tune from their freshman album. There are some nice songs here, just no more great ones, yet.

Conclusion: High Road III are some of the best performers in the industry. While they’re still working on a body of work to match, it’s clear that they’ve arrived with their craft pre-honed, and they’re on their way to becoming the next Isaacs. Start paying attention to them now!

May 26, 2014 Memorial Day: No Greater Gift
Recent Comments
2 Comments | Leave a Comment
"What is a Christian nationalist?"
Josh Renfrey My Friend the Gay Humanist
""Owen recently quoted a tweet from a woman expressing frustration at women who complain they ..."
tovlogos Towards a Balanced View of Christian ..."
"I'm having trouble finding the data you cite at ARDA. When I copy and paste ..."
Mike Stidham What is an Evangelical?
"I'm with David here. When "evangelicals" developed as a movement distinct from fundamentalism, they did ..."
Mike Stidham What is an Evangelical?
Browse Our Archives
Follow Us!

Mark of the Beast? Microchips to...
Hedgerow
Related posts from Young Fogey