Ten Religious Holidays Not Yet Exploited by Hallmark

What's not to love about holidays? You get to take off work, everyone's in a great mood, and there's always plenty of delicious food lying around. Wouldn't it be great if we could sustain all that fun and excitement throughout the year? Well, you're in luck. So sit back, crack open a Good Book, and get ready to celebrate these ten major religious holidays that still aren't on Hallmark's radar. 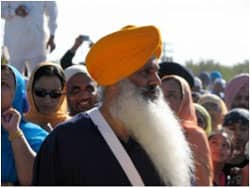 Although most Sikhs live in the religion's homeland of India, Sikh communities have become increasingly common in the West. (Those men in turbans you might think are Muslims are most likely Sikh.) But wherever they reside, you can bet Guru Nanak's Day will be celebrated in style.

For the first couple of centuries after Sikhism was founded, ten gurus served in succession as the leaders of the religion. When the tenth guru died, however, no single leader emerged, and the tradition of having a sole guru was abandoned. Not surprisingly, many Sikh holidays hearken back to events in the lives of these great men. And one of the biggest, no doubt, is the festival honoring the birth of the first guru, Nanak.

Guru Nanak was born to a Hindu family in 1469, and around the time he turned 30, he had a mystical experience that became the basis for the religion. While bathing in a river, he plunged into the water and didn't resurface for three days. During that time, he later said, he was communing with God. Drawing on elements of both Hinduism and Islam, Nanak journeyed far and wide, preaching his new faith of Sikhism and compiling his teachings into a scripture known as the Guru Granth Sahib.

Today, Nanak's birthday, which falls in October or November (depending on the lunar calendar), marks a joyous three-day celebration for Sikhs around the world. As part of the festivities, some communities undertake a ritual known as the Akhand Path, a kind of marathon reading of Sikh scriptures, usually continuing nonstop for the entire 72-hour holiday and ending on Nanak's actual birthday. For the slightly less studious, there are grandiose processions that typically take place the day before Guru Nanak's birthday, during which devotees wave the Sikh flag, brass bands play, and martial-arts teams show off their swordsmanship.

The name Shichigosan literally translates to "seven five three," but (despite our best guesses) this holiday isn't a celebration of football plays or ATM codes. Rather, the numbers reference the ages of the festival's guests of honor -- children ages 7, 5, and 3. Shichigosan, which falls on the weekend closest to November 15, serves as a kind of rite of passage holiday for the Shinto faithful, and it's popular in Japan, where Shintoism -- a belief system that values nature, ritual purity, and the worship of spirits called kami -- is one of the dominant religions.

According to Japanese numerology, odd numbers are considered lucky, which is why these particular numbers are celebrated. Traditionally, boys age 5 and girls ages 3 and 7 dress up in special clothes and visit a Shinto temple to receive blessings from the priest. And while it's hard not to love a good blessing, Shinto children likely enjoy Shichigosan more for the treats. At the temple, priests give each child two packages. The first has rice to be mixed into the evening's dinner; the second contains cakes shaped like various Shinto symbols. But the fun doesn't stop there. Parents also throw parties and give their kids gifts in celebration of the special day, and elders hand out "thousand-year candies," which carry wishes for a long life.

When was the Christian Church truly born? Christmas, which celebrates the birth of Jesus? Or what about Easter, which celebrates Jesus' resurrection? Both are legitimate answers, of course, but more than a few Christians believe the Church's true beginning is marked by Pentecost, the holiday that falls fifty days after Easter.