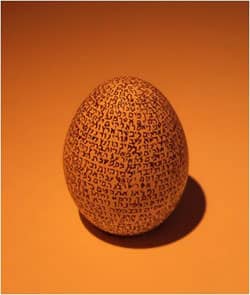 The parsha (weekly Torah portion) for this week, just after Simchat Torah, is Bereshit. Bereshit means "in the beginning" and it is the first word in the portion. Be sure to check out the video at the end of this article!

And here we go again. Some people like to say that all good things must come to an end but I beg to differ. Some of the best things in life just keep going around and around and around. It's a little bit like a merry-go-round, the Torah I mean. We keep cycling around and no matter how often you need to hop off and take a break, we will always be studying the Torah.

It's a story most of us are familiar with. G-d creates the world in six days. How long were these six days? We are not sure. They could have each been a year long or a month or an hour. In fact, we celebrate Rosh Hashanah in the seventh month. Why is our "new year" celebrated in the seventh month of the year? It is because this is the anniversary of when human beings were created. Everything prior was the set up for this.

Regardless, there are six very distinct sections of creation. The first day is the separation between light and dark. Before this separation happened, though, what was there? Our human brains just can't conceive what it was before this. A rabbi once asked his class, "What was there before light and dark?" And proving yet again that kids give us the best answers, one kid yelled out, "It was clear." I like that theory.

Day two was full of creating and separating water and air, creating the sky. Day three we read that G-d placed the water beneath the sky, creating the land and sea, and the flora begins to sprout. On the fourth day, G-d begins to define days and years by creating and using the sun, moon, and stars. On day five we get the fishies in the sea and all manner of water creatures. Day six brings us animals of the earth as well as the creation of man and woman. Lastly, G-d endows the earth with more plants to enable the people and animals to eat. Finally, on the seventh day, G-d took a break, surveyed all the work, and decided this was a holy day. Thirty-three verses and our world has been created.

The next part deals with setting our stage for the stories to come. We learn that G-d sent a big rain down to earth to moisturize the land and fill the wells. Then the parsha tells us about the infamous trees: the Tree of Life and the Tree of Knowledge. Here we learn G-d's instructions to Adam and Chava. (Chava is known as Eve, but we shall call her Chava. In Hebrew, Chava means life-giver whereas Eve was chosen as her English name because it stems from the word "evil," referring to the Christian concept of Original Sin . . . which is not a Jewish theme.) They can eat of any tree except the one ‘over there.'

Of course the temptation is intense and there are evil forces in Gan Eden (the Garden of Eden). A serpent comes and encourages Chava to eat of this tree that is forbidden. She succumbs to these forces and encourages Adam to as well. Once they have eaten of the tree, they realize that they are naked and run for cover. G-d knows of their acts and is, shall we say, not thrilled. As punishment, Adam and Chava were to leave Gan Eden forever. Adam would have to work hard for his food, tilling the earth, and Chava would experience the pain of childbirth. As for the serpent, he lost his limbs and was forever doomed to slither through the dirt. As Adam and Chava left the garden, there was an angel, a cheruvim, standing at the gate with a fiery sword.

Those are the first three chapters of Bereshit. I would like to note here that I am purposely not going into detail or too much of the rabbi's interpretations. This being such an important parsha and being the very first parsha of our written and oral traditions, there are commentaries upon commentaries written about this section of the parsha. Many deal with the Jewish mystical aspect of this parsha. Perhaps we can delve into that at another time.

However, our story does not end here. The parsha continues with Adam and Chava's children, Cain and Abel. Cain and Abel became a farmer and a shepherd. Both Cain and Abel brought an offering to G-d, of which G-d acknowledged Abel's but not Cain's. This distressed Cain and despite G-d's warnings that even with free will, he had to behave righteously, Cain killed his brother Abel in his field. When G-d asked Cain where Abel was, Cain replied, "I do not know. Am I my brother's keeper?" G-d, then furious with Cain, cursed him to be a failure as a farmer and wander the land. Cain then complained again to G-d that the punishment was too much and G-d marked Cain. G-d promised to punish anyone who killed Cain and so Cain left and settled in a new land.