San Francisco Chronicle - Not all who wander are lost

Not all who wander are lost

One thing I love about writing this column is having the opportunity to quiz people from all walks of life about their most deeply held convictions and beliefs.

Learning about a person's spiritual life satisfies my natural curiosity about the world and, at times, deepens my own practices and beliefs. I think many people long for that same sort of open dialogue, a chance to talk with others about why they believe what they believe and what they to do nourish those beliefs.

It's a need that Cathie and Leo Brunnik hope to meet with their new website, Patheos, which intends to share the history, theology and practices of 100 world religions and spiritual traditions. Visitors to the site can compare and contrast religious beliefs, watch videos of sacred rituals, discuss all aspects of faith and the spiritual side of the issues of the day, and dive deep into a growing reference library.

I spoke to Leo Brunnick, who lives in Denver, about his plans for Patheos -- a hybrid word that the Brunnicks mashed up to express the idea of exploring multiple "paths to God" -- his desire to enhance the quality of spiritual discourse online, smorgasbord religions, "cereal aisle" spirituality and the value of understanding what others believe.

What inspired you to launch a website about religion?

My wife Cathie and I have both been in Web technology for a bunch of years, so it's the world we know. And when we got married a year ago, we spent some time trying to understand each other's religious backgrounds. She was raised Lutheran but as an adult has done the nondenominational evangelical route, and I come from a big extended Irish Catholic family. Not that those are worlds apart, but, well, we were asking ourselves, exactly how far apart are they? What do the traditions mean? And how do they fit together?

You're documenting the major world religions and many of the minor ones as well. That's a big job. What was your starting point?

Our intent was to write about each tradition from the perspective of world experts and scholars but then to put the material into a format so that each tradition could be easily compared side to side. You could answer questions like: Do they believe in a god or gods? If so, how many, and what are their names, and what do they do? Where do they live? Is there an afterlife, and what is it called? And how do you get there? We wanted to get as close as possible to an apples to apples comparison, whether it was Christianity or Buddhism or even Scientology, you know, to document the belief systems that are a big influence on what is going on in the world right now.

Recently there's been a lot of media coverage about a Pew Research study that looked at the reasons why people change religions. It was following up on an earlier poll showing that a significant number -- 44 percent -- have changed their faith at least once. Does that statistic surprise you?

It doesn't surprise me. As a matter of fact, it speaks to what we're doing at Patheos. Whether it's the 40 or so percent that are switching within Protestantism or the large numbers of people going in and out of the unaffiliated category, it just shows that all over the U.S. there are people who, for lots of reasons, are looking around. Of those, the vast majority agree with the statement that every religion has it partly right, but no religion has it entirely right. Our intent is to kind of lay it all out there and say, this is what all the different traditions are, where they came from and you they compare to one another, how they're the same and how they're different.

Luis Lugo, the director of the Pew Forum on Religion and Public Life, was quoted in Time Magazine after the results of study were released as saying that the religious marketplace in the United States is like "the supermarket cereal aisle" -- lots of tempting choices, lots of competition for customers.

You do? I wondered what you thought of it, because to me it sort of trivializes the process of religious or spiritual exploration. Why do you like the metaphor?

I think the picture of someone having so much to choose from is probably where the analogy has its greatest value -- because there is so much out there. There are hundreds of always-on channels, if you will. When I hear that statement, it reminds me that even Americans who have not actually switched faiths in many cases have created a smorgasbord religion for themselves. They're like the person who goes to Catholic mass every Sunday but also reads Wayne Dyer and Eckhart Tolle or believes in the power of manifestation. Those people are not necessarily drifting away from their religions but they are looking around and curious. They're trying to fill in the holes for themselves from a spiritual perspective.

It seems to me that choosing a religion or spiritual path, assuming you're looking for one, is partly about accessing information. But there's another, less concrete, some might say mystical aspect to the process that goes well beyond understanding the basic facts about a particular faith.

That internal knowing, that pull, that yearning for something more important, kind of exists within human nature, I think. The difference for young people today is that they have so much access to what's going on around the world that they can explore spirituality in ways that even 20 years ago we could not do. If you were born in Boston in 1965, like me, that yearning would be satisfied within the community inside the Catholic Church. What the kids are doing now, the young people, I mean, is exploring beyond their roots.

It isn't just young people, is it?

No, it's everyone, but I think the younger ones are more open to the idea.

Have you ever switched faiths, or have you continued on one tradition your whole life?

I grew up as a traditional Irish Catholic, and I when I was in high school and college, passed through some years of being involved in evangelical Christianity, specifically charismatic evangelicalism. I went off to Harvard and was steeped in, shall we say, the ecumenical side of the world. Harvard is very big on helping people try to understand lots of different perspectives. And then, having gone into the Marines and then into technology where I spent a lot of time in India and Asia and Europe, I had an opportunity to sort of be a student of the world, to see how it's lived on the ground. When you put all of those things together, I, like a lot of people, found myself looking around for what worked, to answer my questions about what I believe and how I want to practice what I believe.

You mentioned before that one reason that you started Patheos was because of your wife's children and your own kids coming from different backgrounds. You wanted to teach them about each other's beliefs and practices. Do you encourage your children to explore other faiths? Would you feel a sense of loss if one or more of your children decided to follow a different spiritual tradition from the one they grew up with?

If one of my children chooses a spiritual path that is different from mine, I think -- like any parent, I will hope very much that there is more than one spiritual path that works. Because if you don't believe that, then either you're wrong or they're wrong. And that's not an outcome that anybody would want. I have seen too much from my own childhood friends and my own adult friends what happens when a parent insists on a child believing anything. Quite often the opposite result occurs.

A few weeks ago, your wife Cathie was quoted in The Denver Post as saying: "We have to be a little coy" about discussing how your family resolves the matter of blending your religious traditions. Why be shy when your aim is to foster open conversation and sharing of ideas? I'm sure a lot of people are facing the same issues your family did and would like to know how you sorted it out.

Well, the reason we choose to be coy in this case is that first, like most people who find themselves anywhere in public discussion, we like to preserve our kids' privacy. But, also, and this is really at the heart of what we're doing at Patheos, we don't want people to think that we have an agenda or that the people behind our site think that there's one right answer you'll find there. Our entire team is made up of people from different faiths -- Catholic, Lutheran, Anglican, Buddhist, Mormon, atheist -- who are coming together to work on the project.

I assume you read all or most of the content on the Patheos site. After this crash course in comparative theology, I wonder: What did you learn that really amazed you? What bits did you want to read out loud to whoever was in the room with you?

I have always been fascinated by what drives what I'll refer to as newer traditions, whether it's a newly revealed tradition like Mormonism or a newly realized tradition like Scientology. Understanding the constructs of each gets you a little closer to understanding why millions of people believe something that is different from what you believe. So, I am a voracious reader of those kinds of things, and frankly can't wait till some of our experts finish out some of the new Asian traditions, like Soka Gakkai, Cao Dai, and Juche. These are traditions that people in the West have barely heard of but that have millions of adherents and rival the size of traditions that are much better-known here.

You mentioned you did a lot of traveling and learning about different faiths. Do you think you were looking for something in particular?

I think everybody's looking for something. And I think there is a basic human need to ask the questions like: Why are we here? What are we supposed to be doing when we are here? Is this our one shot? Do we go around again? And ultimately, where do we end up when this is over? It's hard to have a human heart and soul and not wonder about those things.

What did you do with that information? Did your practices change in some way based on what you learned?

It gave me a new perspective, whether I was watching the news or reading the paper or whatever else it was; it was hard not to put myself in the place of the people in the story. It was hard not to then say, 'Wow. I can only imagine growing up believing this and being influenced by that!' And what would it look like to me at that moment, you know?

No, Flannery O'Connor Has Not Been Canceled
Rebecca Bratten Weiss
4 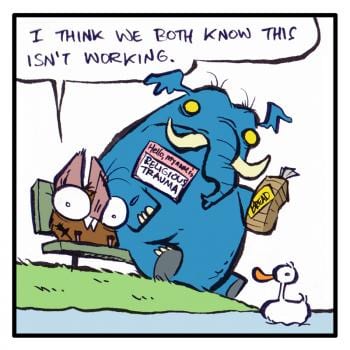 The Great Breakup
J. Burrello
Get Patheos Newsletters
Get the latest from Patheos by signing up for our newsletters. Try our 3 most popular, or select from our huge collection of unique and thought-provoking newsletters.
From time to time you will also receive Special Offers from our partners that help us make this content free for you. You can opt out of these offers at any time.
see our full list of newsletters
Editor's picks See all columnists