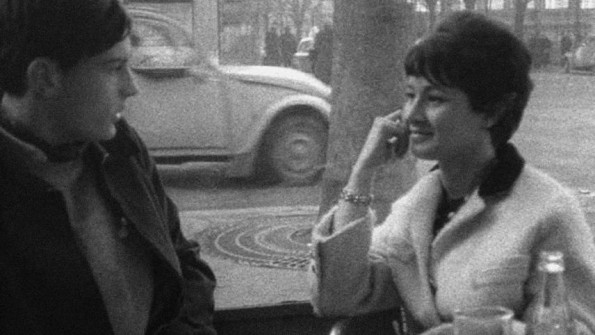 Suzanne’s Career has always been the hardest of the Six Moral Tales to warm up to.

Here the narrator is Bertrand (Philippe Beuzen), a shy and unaccomplished pharmaceutical student. Bertrand is nicer than the other guys in his circle, particularly Guillaume (Christian Charrière). At least that is the assessment of Guillaume’s much put-upon companion, Suzanne (Catherine Sée). That’s not a particularly high standard, though. Guillaume treats Suzanne shabbily, slapping her buttocks when she leans over, dismissing her complaints with feeble protestations that he was joking, and continuing to interact with her long after any pretense of genuine interest has been shattered. Guillaume is one of those men who justifies his boorishness by reminding the world–the aggrieved woman especially–that he never lied about who or what he is. “If my taste were good, I wouldn’t be attracted to you” (31), he says. A real prince.

Over and above the lack of gallantry shown by both men is a class snobbishness. Bertrand speaks of getting a weekly allowance from home. Suzanne works during the day to pay for her own evening classes. She is overanxious to please, and that means offering to pay–at cafes, movies, nightclubs. Bertrand is disgusted at the way Guillaume exploits Suzanne, but soon he finds himself falling into the same patterns. Similarly disgusted at himself, he finds himself blaming Suzanne for his own conduct. She should have more pride, more integrity! “Her complete lack of dignity justified the contempt that I had always felt for her…”

Towards the end of the film, Bertrand discovers some money missing from his apartment. Both Guillaume and Suzanne have been in the room where the money is hidden. Bertrand tells Sophie (the woman he really desires) that he “preferred” to think of Suzanne as the guilty party. Soon after, Sophie informs Bertrand that Suzanne has married the handsome Frank, and the film ends with Bertrand spitefully and mournfully claiming that Suzanne has extracted her “real revenge” on him by “depriving me of my right to feel sorry for her.”

In Rohmer’s written version, this summation is prompted by seeing Suzanne and Frank “strolling along the boulevard.” This ending more directly invites comparison to the end of The Bakery Girl of Monceau, where the male protagonist walks arm in arm with a new lover and imagines being spied by the girl with whom he has previously flirted. In that instance we have no evidence that the bakery girl has spied the new couple–the narrator says only that he is glad they are far enough away to avoid a “scene” if spotted. In the text of “Suzanne’s Career,” the addition of “from time to time” underscores that Bertrand saw Frank and Suzanne more than once. Bertrand also claims that “despite herself she couldn’t keep from glancing at me.” 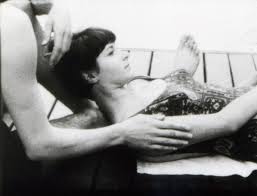 The film transfers this scene from boulevard to poolside, and Bertrand’s final voice-over is spoken as Frank massages Suzannes’s arms, legs, and buttocks. Suzanne doesn’t glance at Bertrand, Rohmer shows him standing apart from the other couple and his own date. Ginette Vincendeau claims that as each of Rohmer’s series unfolds, the agency of the female characters increases. She also suggests that Suzanne’s victory may simply be a Pyrrhic one. Is her “career” as Frank’s wife simply and extension of her willingness to buy the favors of Guillaume and Bertrand, only with a different form of currency–her body?

In the film Bertrand says that Suzanne is beating “us” to “the finish line” and “showing us up to be the children we were.” This is somewhat different from Rohmer’s story, where he says that she was “reducing us pitilessly to the level of boys that we unquestionably still were.” This alteration strikes me as not insignificant, but I am quick to remember Rohmer’s own claims (in the preface) that literature “belongs less to form than to content” and that “it is easier to compose images starting with a story than it is to make up a story on the basis of a series of images.”

The latter quote suggests to me that as a director, Rohmer was less interested in fidelity to the minute details of the text and more interested in finding visual means to communicate its meaning. He acknowledges that there were occasional improvisations by actors when particular greetings or words felt more natural, and adds that “there are places, too, where descriptive phrases that on paper are expressed indirectly on the the screen become direct descriptions.” At the end of the written story, Bertrand is conflating several incidents that take place over a period of time. At the end of the film, Bertrand is narrating an epiphany at a single, concrete event.

If the ending of the printed text makes Suzanne a little less oblivious to Bertrand’s gaze, the beginning underscores the communal nature of the story in a way that is sometimes lost in the film. The narrator of the text says “we” before he ever says “I.” Guillaume is integral to the story in a way the narrator’s friend is not in Bakery Girl. Although Guillaume is not present at the end of the story, the penultimate paragraph speaks to how Suzanne’s marriage has caused Bertrand to revise his own thinking. Previously he had thought of Suzanne (and, presumably, of girls like her) as Guillaume’s “victim.” Even towards the end of the story, Bertrand has trouble seeing Suzanne as an individual, commenting on her appearance and speculating about the “type” of girl that interested his former friend: “rather small and pleasantly plump.”

Some of these observations get carried over to the film, but there they come across as sudden insight rather than the conclusion of revised (and sustained) thought. The psychology behind the penultimate paragraph appears to be a realization that Guillaume was no more confident in his sexuality than Bertrand, pursuing only those women to whom he felt superior (whether socially or physically) to compensate for his own insecurity. In announcing Suzanne’s marriage, Sophie derisively refers to Bertrand as “Mr. Smart” and insists that whether he admits it about Suzanne or not, “men adore her.” When Bertrand insists he does not adore Suzanne, Sophie snaps back with “I said ‘men,’ not ‘boys.'”

The end of the story also differs slightly from the end of the film in that Bertrand, the narrator, is capable of remembering what happened afterwards. His views of the newlywed Suzanne came “as I was failing my exams and losing Sophie.” This line is present in the film, but it is voiced while the Bertrand is at the pool, and it is at best unclear as to how aware he is of what the next few weeks, much less the rest of his life, have in store.

For all of Rohmer’s honesty about the emotional cowardice of (young) men, these films stop short of simply man-bashing. Whereas the narrator in the story sees himself as part of a subset, men, who have the futility of their attitudes exposed, the narrator of the film situates himself more broadly as part of a bigger group (human beings) of which Suzanne is a part. We are all racing towards adulthood, each wanting happiness, and justifying our own actions in light of how we think they help or hurt our chances of attaining it.

Also from The Six Moral Tales:

The Bakery Girl of Monceau 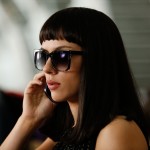 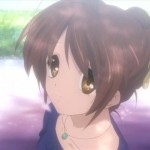 July 28, 2014 Clannad -- The Motion Picture (Dezaki, 2007)
Recent Comments
0 | Leave a Comment
"Excellent points. I thought this was a really good movie, and the style is subtle ..."
movieman0283 My Best Picture Choice: Spotlight
"True story: I went to see this film by accident when it was in theaters ..."
movieman0283 The Devil Wears Prada (Frankel, 2006)
"I just scrolled through the film to get some clips for a video (I'm illustrating ..."
movieman0283 Salò (Pasolini, 1975)
"Well reasoned. I agree with you about Spotlight's technique - I just rewatched this and ..."
Andrew Spitznas My Best Picture Choice: Spotlight
Browse Our Archives
Related posts from 1More Film Blog