Paper Boats for the Goddess 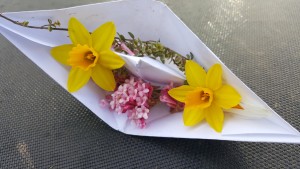 Some months ago, following a small gathering with other Hekate devotees, a few of us posted photos of paper boat offering vessels taking our prayers, petitions and offerings out to sea.  It formed part of a devotional ceremony to Hekate – who has numerous oceanic connections.

We made these offering vessels by folding boats from recycled paper. We then wrote on it our prayers and petitions and filled it with biodegradable natural offerings.  The offerings were then taken to a local beach, where we offered hymns and invocations, waiting for the incoming waves to take the offerings out to sea – which it did, in a spectacular way.

There have been some genuinely remarkable responses to the idea –  which is being adopted, and indeed evolved, by other groups and individuals.  This practice, in the context of Hekate, is an entirely modern invention – but like many things, it has ancient and concurrent precedents.   It is a practice I am passionate about, so taking some of the responses on board, I decided to write a little more about the concept. 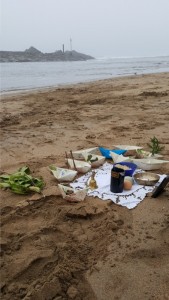 The idea to make these vessels was not entirely my own.  It was inspired, in part, by a chance reading of a text in which it was suggested that boat-like offering vessels were floated to sea, by women, from the shores of the Greek island now known as Delos.

A short description in an 1800’s dictionary:

“The women of Delos offered sacrifices to her in vessels of the shape of boats, and the sacrifices consisted of various things; but fishes were never offered to her.”
~ Dictionary of Greek and Roman Biography and Mythology

Delos is famous for being the birthplace of the sacred twins, Artemis and Apollo (also see The Birth of Artemis), after which it became home to one of the most famous temples to Apollo (second only to Delphi).  The island’s history as a sacred place predates that of the birth of the twins. It is believed that Delos is the body of the star goddess Asteria, who shapeshifted first into a quail (a type of bird) and then flung herself into the ocean, becoming a floating island, in order to escape the unwelcome advances of the Olympian god Zeus.  Evidence suggests that the island was previously home to the temple of a famed oracular goddess known as Brizo (‘Slumber’’).  It is probable then that the small boats described in the quote above were to this goddess, of whom little else is known. The offerings may have been linked to the Dream Oracles, or may have been part of petitions to keep sailors safe.

I discuss some of this in more detail in my forthcoming book Circle for Hekate: Volume I, and in Volume II there will be example ceremonies to use as templates for your own.

Flames were also floated out on Lake Nemi, a few miles south of Rome, where the famous Nemoralia festival sacred to the goddess Diana was held annually in August. Here Diana was worshipped as Trivia, in  triple form. Entire ocean-going ships were also found at the bottom of this inland lake, which some researchers believe were given as ritual offerings. Inspired by these various ideas, I decided to incorporate some of them into my own devotional rites.

I also know that other groups in the UK create floating offerings for goddesses such as Isis (in London on the Thames) and Sabrina (goddess of the river Severn) on the river Severn. There is also an individual who regularly floats offerings out to Manannán mac Lir (the Irish god of the sea), on the Irish coast.  Their paper boats are far more elaborate than mine!  I guess a lot of supposedly fabulous new ideas are more often, in reality, old prodigious recycled ideas.

Floating offerings on water, for water goddesses, is of course also a living tradition in other spiritual traditions.  For example, flowers and other offerings accompanied by prayers are floated out to sea for Yemanja (Iemanjá) the water goddess of the Yoruba religion. This is done in Africa, Brazil, Uruguay, Cuba and wherever she is worshipped.  In Thailand, offerings are made to the river goddess Phra Mae Kongka. The most famous contemporary example of this kind of offering must be the daily offerings made to Ma Ganga, the goddess of the river Ganges in India.

Watching floated offerings on the river Ganges (Varanasi) while I was travelling in India for a few months in 2015/16 was not just magical, but a beautiful insight on how our own ancestors might have worshipped water deities.  It was captivating to watch these delightfully pleasing offerings made from recycled paper, fresh flowers and a small butter-dipped wick, float down the river – and to ponder the beauty of devotion held for Ganga Ma. 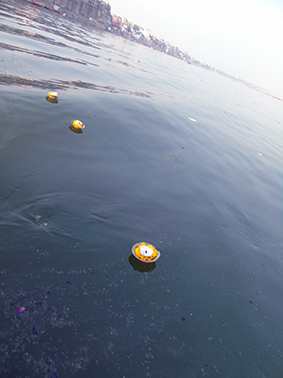 This daily practice in Varanasi is known as Aarti.  The offering or diya consists of a flower and a flame which are floated down the river. Every evening fire is offered by officiating Brahman priests, in a truly spectacular ceremony on the bank of the river by the Dasaswamedh Ghat. The ceremony is watched from both the land and from dozens of small boats from the river side by hundreds of participating devotees, who (except of course, a handful of foreign tourists) are there to honour the river goddess. 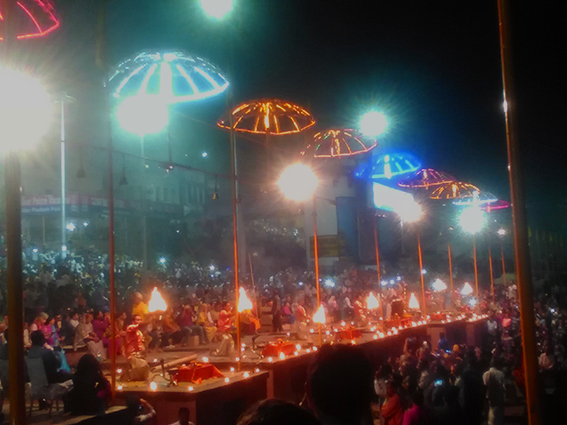 Watching – and floating my own offerings – from a boat on the Ganges was very special – and made me recall the reason I started making my own paper boat offerings at home.

I hope to be floating many more devotional offerings out onto the waters of this planet.  If you, like me, enjoy the idea of connecting with the spirit of the waters of our planet in this way, please make sure to be responsible in your choice of materials / offerings. Never use any plastics, always make sure your offering is not harmful in any way to the creatures who call the waters home and that everything is fully biodegradable. 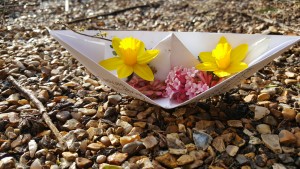 “Then the goddess through the love of the god conceived and brought forth dark-gowned Leto, always mild, kind to men and to the deathless gods, mild from the beginning, gentlest in all Olympus. Also she bare Asteria of happy name, whom Perses once led to his great house to be called his dear wife. And she conceived and bare Hecate whom Zeus the son of Cronos honoured above all. He gave her splendid gifts, to have a share of the earth and the unfruitful sea. She received honour also in starry heaven, and is honoured exceedingly by the deathless gods. For to this day, whenever any one of men on earth offers rich sacrifices and prays for favour according to custom, he calls upon Hecate. Great honour comes full easily to him whose prayers the goddess receives favourably, and she bestows wealth upon him; for the power surely is with her. “
-from the Theogony of Hesiod, translated by Evelyn White, 1914.  You can read the full text on Sacred-Texts. 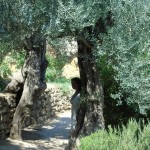 June 28, 2017
Building a Temple, Fundraising and Manifesting Devotion
Next Post 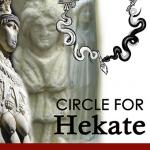 November 22, 2017 Circle for Hekate
Recent Comments
0 | Leave a Comment
Browse Our Archives
get the latest from
Adamantine Muse
Sign up for our newsletter
POPULAR AT PATHEOS Pagan
1

Cross and Crossroads: How to Spot...
Agora
Related posts from Adamantine Muse