Martyn Lloyd-Jones Monday – On Sealing With the Spirit

The Doctor was speaking about a verse from Ephesians 1 which, in the King James version, reads:

“In whom ye also trusted, after that ye heard the word of truth, the gospel of your salvation: in whom also after that ye believed, ye were sealed with that holy Spirit of promise” (Ephesians 1:13).

Here is some of what he says about those words, which I have quoted previously here:

“I am increasingly persuaded that it is our failure to understand this precise statement that accounts for so much lethargy and failure among us as Christian people at the present time. 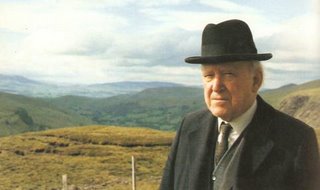 At least I will go so far as to assert that any Christian who is not experiencing the joy of salvation is in that state very largely because of a failure to realize the truth taught in this particular verse of Scripture, for in it we are brought face to face with the way in which we can enter into the fullness which we should be experiencing in Christ. To ‘rejoice in the Lord’ . . . is an essential part of God’s purpose for us in Christ. Our Lord Himself, at the end of His life on earth, said not only, ‘My peace I give unto you’, but also ‘My joy’ (John 15:11). That is the heritage of a Christian. Christian people should be full of joy and of peace and of happiness . . . but if we feel that we are ineffective as Christians and that our usefulness is not very evident, then I suggest it is . . . [because of] our failure to realize what is meant by God’s sealing of His children by ‘that holy Spirit of Promise’. . . .

Sealing is a subject that has caused much controversy. It is not an easy subject, therefore; nevertheless, we must face it. . . . Let us first take ‘sealing’ in its ordinary meaning . . . a seal is that which authenticates or conveys authority. Two men may draw up an agreement; it may be to sell a house or arrange a business. . . . Another meaning which attaches to ‘sealing’ is that it is a mark of ownership. . . . It is to indicate that something, whatever it is, belongs to and is the property of the person who has used that particular seal. . . . Furthermore, a seal is also used for the purpose of security. . . . If [the] seal has in any way been broken or marred it is an indication that someone has been tampering with [it]. . . . Thus we find that there are three main meanings to this term ‘sealing”—authenticity and authority, ownership, and security and safety’ and these will help us to understand what is meant by our being ‘sealed by that holy Spirit of Promise’.

For more information on Dr. Martyn Lloyd-Jones see this summary post or the MLJ Recording Trust.

March 11, 2008 ASK A BLOGGER - What Are The Results of Spirit Baptism?
Recent Comments
65 Comments | Leave a Comment
"People seem to forget that the very problem of sin as provoked by law is ..."
crossroman Disagreeing with Piper Over the Man ..."
"I wish everything can just be a safe place to anyone. Every lives matter, every ..."
Loop Towers GUILTY- Even US police can no ..."
"Some further pointsBeing vaccinated against Covid19 shows love to others - This is a lie ..."
Follower of the Way Are COVID-19 vaccines made from aborted ..."
"It is part of Bible prophecy as the Beast system is coming"
Follower of the Way Are COVID-19 vaccines made from aborted ..."
Browse Our Archives
get the latest from
Adrian Warnock
Sign up for our newsletter
POPULAR AT PATHEOS Evangelical
1

Yes, Canada is Persecuting the Brethren
The Chorus In The Chaos
Books by This Author Books by Adrian Warnock