The mental illness taboo is a problem for all of us

The mental illness taboo is a problem for all of us June 24, 2013 Adrian Warnock

Interesting article from the New Scientist:

In a global study published last year, we showed that 79 per cent of people with depression had experienced discrimination in the previous year (The Lancet, DOI: 10.1016/s0140-6736(12)61379-8). More than 1000 people were interviewed across 35 countries, and a remarkably consistent picture emerged: such experiences are common and may severely limit how far people with mental illness can lead normal lives. Almost a quarter, for example, said they had been unfairly rejected when applying for jobs. Intriguingly, these figures are very similar to the findings of a previous international study that we had conducted, focusing on people with schizophrenia. . . more than a third of participants had not started a new relationship because they expected it to fail as a result of discrimination. For the same reason, 71 per cent said that they wished to conceal their diagnosis of depression from others . . . Those with mental illness are constantly confronted with this dilemma of keeping quiet or opening up. 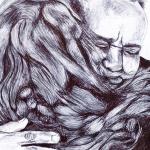 June 25, 2013 Pastoral care with mental health in mind
Recent Comments
0 | Leave a Comment
"Thank you for your article! For my whole 60+ years I've had a hip condition, ..."
Linn Strength in Weakness
"I no more fear the nonexistence that will come upon my death then the nonexistence ..."
Mike The one question atheists can't answer: ..."
"The bottom line of all of this is that Romans 7 is expressing utter complete ..."
crossroman Disagreeing with Piper Over the Man ..."
"Yes this is good! - it (Romans 7) calls for the forced abandonment of the ..."
crossroman Disagreeing with Piper Over the Man ..."
Browse Our Archives
get the latest updates from
Adrian Warnock
and the Patheos
Evangelical
Channel
POPULAR AT PATHEOS Evangelical
1