Does unbelief in a pastor’s children disqualify him?

Does unbelief in a pastor’s children disqualify him? September 11, 2013 Adrian Warnock 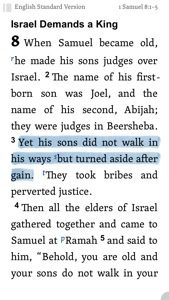 I was reading 1 Samuel 8:1-3 this morning where it speaks of Samuel’s children not following his ways.

Many modern pastors have experienced a similar problem when their children walk away from The Lord. Some over the years have been asked to resign as a result. The reason for this comes from Titus 1:6 and 1 Timothy 3:4. These two verses speak of the need for children of elders to not be rebellious, and in many english translations, that they be believers.

Some have argued that no matter what age they are, unbelieving children should disqualify their father from being a pastor.

What struck me this morning was that taken literally this view would have disqualified Samuel early in his ministry.

What is interesting is that unlike Eli earlier in the same book Samuel is not criticised for the actions of his children. Perhaps the reality is that there are some situations where the parents should indeed be blamed for their children’s waywardness and some where they shouldn’t.

Another verse which is cited in these matters is found in Proverbs 22:6 which many have assumed means that good parenting always leads to good results. I strongly believe that we have to realise that all proverbs are statements of principles not unconditional promises. Thus it is a general principle that good parents raise good children. But bad parents sometimes raise good children who do well despite their upbringing. Good parents also sometimes raise bad children who don’t take advantage of what is offered to them.

Perhaps then the verses in the pastoral epistles refer to a general principle. Either pastors should be examined on the results of their parenthood in general (assuming they have more than one child) or perhaps it should more be that we in general should expect pastors children to be obedient.

“How bad does Johnny need to be before dad gets fired?” is not specifically stated in the bible. This is particularly the case if you believe as many do that the Titus verse should really be translated as requiring pastors children be “faithful” instead of Christians or in other words “trustworthy” ie good members of society who stick by their word.

The pressure a more absolute view of this could put on pastors kids can be unbearable. It can also lead to hypocrisy in pastoral families as there is too much fear to seek out help when it is needed.

I can see why, however, a pastor who is facing a situation where his children don’t follow him might consider quitting. It is a heart wrenching thing to see children reject the faith and rebel. John Piper came close to resigning for this very reason. There seems to be a growing consensus that pastors can continue in such circumstances (see for example an article by Justin Taylor)

But what about you and I? We may not be struggling with whether or not we can continue in ministry with integrity because a child has gone totally off the rails. But surely we can feel empathy with those in such a position. And surely we are deeply concerned about our own children, worried at times about things they do or say, and eager that they will come to a clear saving knowledge of Jesus that leads to an enduring faith of their own.

For me, I am not a pastor, but it would break my heart if after serving on the leadership team my own children walked away from the faith.

Today, please join me in praying for all our children. May we become better parents and do our own part better. May grace cover our many mistakes. May our children grow up to be better than our parenting should produce. May we set a better example in day to day life, and in our relationship with God. May our children go further in their walk with God than we have gone.

September 10, 2013
What does it mean to be a living sacrifice? Terry Virgo on Romans 12
Next Post