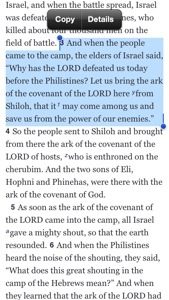 The children of Israel were slow to learn. For generations the cycle had repeated. The book of Judges repeatedly explains that when his people were unfaithful to him he allowed their enemies to triumph over them. When they repented victory returned.

So when they were defeated in Elis time they should have realised what they needed to do. Instead they realised the problem that God was fighting against them through his own enemies. But their solution was to rely on a formulaic approach. They believed that the Ark in a magical way would protect them. They did not seek the God of the Ark. Instead they presumed upon him.

How often do we think that either ancient traditions or modern ideas will help us build a church? It is too easy to assume on God and presume his blessing will be with us.

I’m not great at prayer myself, but reading this passage gives me a renewed determination to learn. I’m aware that the only route to true success is in seeking Gods face.

The people of Israel spectacularly failed to appreciate that God is bigger than the means he gives us to reach him.

Lets not forget this lesson and hold lightly to methods, while we pursue his presence.

September 6, 2013 Supernatural displays don't automatically produce faith (1 Samuel 5)
Recent Comments
5 Comments | Leave a Comment
"I am rather late to the party, but I have only just come across this ..."
Peta Christians must stop lying about COVID19
"I am also a survivor of cancer (5 times and counting). I noticed the "Teach ..."
Statistics Palin Two years on from chemotherapy
"Science always beats Religion. You wouldn't be alive without TechnologyHad the Ancient Sumerians gotten access ..."
Christian Two years on from chemotherapy
"Wrong Oxymoron. Jesus' issue with the Pharisees was how they subverted the Word of God ..."
Ed Dingess Rachel Held Evans is with Jesus
Browse Our Archives
get the latest from
Adrian Warnock
Sign up for our newsletter
POPULAR AT PATHEOS Evangelical
1

Are Women Really That Helpless?
Preventing Grace
Books by This Author Books by Adrian Warnock