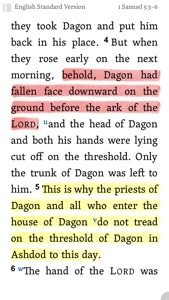 For both charismatics who believe that all the gifts of the Spirit are available today, and cessationists, there is often a nagging question in the back of our minds: why doesn’t God do more of the stuff today?

The theory goes something like this: if God would just be a bit more dramatic then surely people would immediately repent. The truth is even spectacular miracles don’t automatically produce faith.

In our circles we do hear sometimes quite dramatic accounts of when God heals today. But even among fellow Christians healing testimonies like this are more likely to inspire bemused scepticism than vibrant faith.

In the passage before us one verse stood out to me. What shocked me was the response when the so-called “god” falls on its face before the Presence of God, and its head and limbs fall off. You might expect the people to repent and decide to follow the God of heaven. Instead they simply enact a new bit of religious tradition to in some way attempt to protect Dagon’s dignity!

Even when the miracles turn more dramatic still and involve God smiting the people with judgement, the response is not faith but “Send him away!”

The great miracles Jesus performed eventually led to him being rejected by the crowd and crucified. Even his resurrection, although it did give birth to the Church did not lead to the whole nation immediately turning to Jesus.

God has demonstrated his glory adequately enough to produce faith in those who have eyes to see.

To me today, the simple message of this passage is that while there is of course no harm in us asking God to act, we should not expect that when he does the sceptical unbeliever will suddenly believe.

10 Questions Christians Should Ask Before...
Theological Apologetics
Books by This Author Books by Adrian Warnock