You can only lead people to the extent they want to be lead – 1 Samuel 8 September 13, 2013 Adrian Warnock

“Obey their voice and make them a king.” So says God to Samuel in 1 Samuel 8:22. But what of dynamic anointed by God leadership? What of setting the tone of your people? What of hearing from God and not allowing objectors to derail the resultant vision?

It seems that there are times when even the best leader must allow themselves to be lead, even if they know the decision is the wrong one. A wise old pastor once said to me, “You can only pastor people to the extent they want to be pastored.” Or according to an old English proverb, “You can lead a horse to water but you can’t make them drink.”

I do believe that pastors should hear from God and lead the Church in a clear direction. But perhaps there may be a time when God says, “do what the people say.” Many pastors will quite rightly pray that such a time doesn’t come to them. For surely in this situation God’s willingness to allow the people to effectively lead their leader was a sign of judgement.

In many churches if the people are allowed to make decisions in a democratic manner, no change will ever be agreed on. But the point is clear, whatever your form of church government, leaders can only lead by the consent of the people.

This is a challenge to every father also. There have been times when I have simply tried to impose my own will on my family. That is not real leadership. A major skill of all leadership is surely the ability to listen. I need to strengthen that ability. Christian leadership is about listening to the people, and listening to God. But surely our goal, even if it is not always realized, is that the people become persuaded by God’s will, rather than God is persuaded by them. 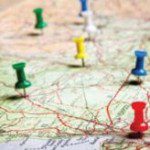 September 13, 2013
Advantages of the Multisite church planting model
Next Post

September 15, 2013 What kind of leader will you be?
Recent Comments
73 Comments | Leave a Comment
"Thank you for your article! For my whole 60+ years I've had a hip condition, ..."
Linn Strength in Weakness
"I no more fear the nonexistence that will come upon my death then the nonexistence ..."
Mike The one question atheists can't answer: ..."
"The bottom line of all of this is that Romans 7 is expressing utter complete ..."
crossroman Disagreeing with Piper Over the Man ..."
"Yes this is good! - it (Romans 7) calls for the forced abandonment of the ..."
crossroman Disagreeing with Piper Over the Man ..."
Browse Our Archives
get the latest updates from
Adrian Warnock
and the Patheos
Evangelical
Channel
POPULAR AT PATHEOS Evangelical
1

Every Church Needs a Joker (And...
Roger E. Olson
Books by This Author Books by Adrian Warnock