How King David reminds us of Christ Jesus 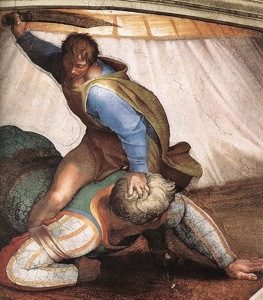 Yesterday’s post began to introduce us to King David, who I argued was possibly the greatest character other than Jesus in the Bible. Jesus himself does call John the Baptist the greatest in status, but David’s story is given in great detail for a reason.

David’s story is so appealing for many different reasons. Generations of boys are excited by story’s of great battles, and glorious victories, none more so than the one we see in 1 Samuel 17. Which of us don’t love the story of the mocking giant being felled by the small stone of the shepherd boy? We also like David precisely because he is flawed, like all of us. He is an imperfect follower of God. He is very much a man. Perhaps the ultimate action hero. In fact with all the violence and sex it is a wonder that we haven’t seen a modern Hollywood version of this story yet!

If there are aspects of David’s personality that reminds us of ourselves, there are a also echoes of Someone else. In reading about the characteristics of David that made him a great leader there is another figure that immediately springs to mind. Surely it wouldn’t take much work to go through each of those characteristics and demonstrate that one who was pleased to be called the “Son of David” fulfils each of them. Instead of a shepherd, a carpenter. Instead of worship with a lyre, long seasons of prayer. The list goes on.

Bible scholars talk of “types” of Christ that prefigure him. There is nobody of whom this is more true than David. Of course where David was indeed sinful, our Master was not, but Jesus was tempted in every way.

We certainly see this comparison between David and Jesus in the account of his battle with Goliath. Our enemy is great and powerful. No one dare stand up against him, for he is far stronger than us. He mocks us and our God constantly. The people are full of fear and have no hope.

In 1 Samuel 17:8 the enemy urges them to choose themselves a representative. Meanwhile God has chosen for himself a representative who will stand for his people. Like David, in his human form Jesus was not particularly impressive. While David faced what seemed like certain death and was delivered, Jesus was delivered through death. What seemed like an impossibly insignificant strategy, a small stone, the death of a single man, won the victory in each case.

And in both cases the whole people of God share in the benefits of the victor of our champion!

And of course this story should inspire you and I. If God can use a shepherd boy or a carpenter to save many, perhaps he can use us!

October 11, 2013 That's why we move like this
Recent Comments
3,938 Comments | Leave a Comment
"I am rather late to the party, but I have only just come across this ..."
Peta Christians must stop lying about COVID19
"I am also a survivor of cancer (5 times and counting). I noticed the "Teach ..."
Statistics Palin Two years on from chemotherapy
"Science always beats Religion. You wouldn't be alive without TechnologyHad the Ancient Sumerians gotten access ..."
Christian Two years on from chemotherapy
"Wrong Oxymoron. Jesus' issue with the Pharisees was how they subverted the Word of God ..."
Ed Dingess Rachel Held Evans is with Jesus
Browse Our Archives
get the latest from
Adrian Warnock
Sign up for our newsletter
POPULAR AT PATHEOS Evangelical
1

Are Women Really That Helpless?
Preventing Grace
Books by This Author Books by Adrian Warnock