What kind of leader should we choose?

What kind of leader should we choose? October 8, 2013 Adrian Warnock 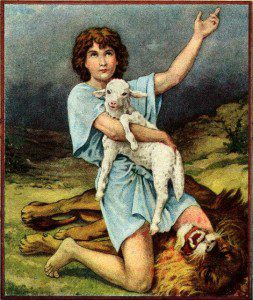 In 1 Samuel 16 our gaze begins to turn from the failed leadership of King Saul to the emerging leadership of the future King David.

David is probably the greatest character in the Bible other than our Lord himself. Certainly more chapters are devoted to his story and his songs than to anyone else. In 1 Samuel so far we have seen rather mixed examples of leadership.  In David’s life we will see a much better model of leadership, and we will not see the signs of a selfish, failed leader we have seen in Saul. But it is not that we turn to a perfect example. The Bible is very honest about its heros, something we would do well to remember in modern biographies of Christian leaders in my view!

How should a leader be selected? This has massive implications for us today in determining whether someone should start a church plant or might be better off serving on the leadership of a multisite venue for example. But even for those of us not making such decisions, we choose a leader for ourselves whenever we join a church.

The short answer is that God selects his leaders. He tells Samuel, “I have provided for myself a king” (1 Samuel 16:2). The sovereignty of God is at work here. Both in the selection and the preparation of those who he calls to lead. Caring for the sheep and singing with his lyre David probably had no idea he was in Gods training school for Kings.

This passage is quite rightly used to make the point that God often chooses the unimpressive, and the overlooked. So often we look on the outside, but God looks at the heart. (1 Samuel 16:7). And yet, some take that point too far. The God who had chosen David before the foundation of the world had indeed put into David certain traits that would make him a good leader. He had also developed his character in the quiet place. So, in selecting a leader we are not to ignore outward traits, rather to be more concerned about the heart condition.

We will see more of the traits of David that will make him a good leader as his story unfolds. But we do get a glimpse here of some of them:

What kind of leader are you?

October 7, 2013
A Meditation on the Many Manifestations of Pride an excerpt from Crazy Busy by Kevin DeYoung
Next Post

October 8, 2013 My favorite Tweets from #AddaWordRuinaChristianBook
Recent Comments
76 Comments | Leave a Comment
Browse Our Archives
get the latest from
Adrian Warnock
Sign up for our newsletter
POPULAR AT PATHEOS Evangelical
1

Why Singing Hymns the Traditional Way...
Ponder Anew
Books by This Author Books by Adrian Warnock