I must begin today with a shockingly offensieve quote from the book Strange Fire. My response to the Strange Fire Conference  is given yet more weight by this quote. Although there are a few places in the book where MacArthur does seek to nuance his assualt, places like this seem to make it clear that it really is the whole charismatic movement on which he elsewhere says he has declared war. 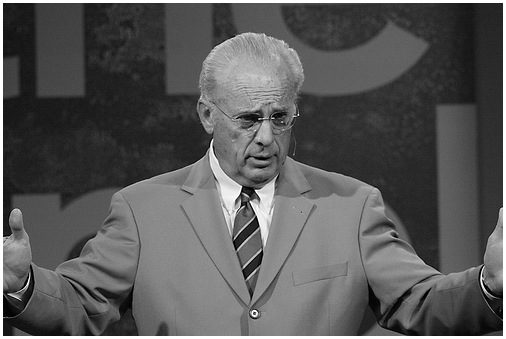 “It is a sad twist of irony that those who claim to be most focused on the Holy Spirit are in actuality the ones doing the most to abuse, grieve, insult, misrepresent, quench, and dishonor Him. How do they do it? By attributing to Him words He did not say, deeds He did not do, phenomena He did not produce, and experiences that have nothing to do with Him. They boldly plaster His name on that which is not His work.

In Jesus’ day, the religious leaders of Israel blasphemously attributed the work of the Spirit to Satan (Matt. 12:24). The modern Charismatic Movement does the inverse, attributing the work of the devil to the Holy Spirit. Satan’s army of false teachers, marching to the beat of their own illicit desires, gladly propagates his errors. They are spiritual swindlers, con men, crooks, and charlatans. We can see an endless parade of them simply by turning on the television. Jude called them clouds without water, raging waves, and wander- ing stars “for whom is reserved the blackness of darkness forever” (v. 13). Yet they claim to be angels of light—gaining credibility for their lies by invoking the name of the Holy Spirit, as if there’s no penalty to pay for that kind of blasphemy. . .

Put simply, charismatic theology has made no contribution to true biblical theology or interpretation; rather, it represents a deviant mutation of the truth. Like a deadly virus, it gains access into the church by maintaining a superficial connection to certain characteristics of biblical Christianity, but in the end it always corrupts and distorts sound teaching. The resulting degradation, like a doctrinal version of Frankenstein’s monster, is a hideous hybrid of heresy, ecstasy, and blasphemy awkwardly dressed in the tattered remnants of evangelical language. It calls itself “Christian,” but in reality it is a sham—a counterfeit form of spirituality that continually morphs as it spirals erratically from one error to the next. . .

The incredible irony is that those who talk the most about the Holy Spirit generally deny His true work. They attribute all kinds of human silliness to Him while ignoring the genuine purpose and power of His ministry: freeing sinners from death, giving them everlasting life, regenerating their hearts, transforming their nature, empowering them for spiritual victory, confirming their place in the family of God, interceding for them according to the will of God, sealing them securely for their eternal glory, and promising to raise them to immortality in the future. – John MacArthur, Strange Fire

It seems like an outrageous stretch to claim that we are somehow committing the inverse of what Jesus calls the blasphemy against the Holy Spirit. But his main point here seems to be that we are running after the Holy Spirit in ways we should not. This leads to another biblical argument I must address, as the claim is that charismatics are overly obsessed by the Holy Spirit.

Argument: The Spirit draws attention to Jesus and not himself, so wouldn’t inspire the modern charismatic movement

Counter Argument: Firstly, who says the modern charismatic movement is obsessed with the Spirit and not Jesus? While that may be true in some cases, that is definitely nothing like universal.  The charismatics I know love Jesus, and are glorifying him in response to the work of the Spirit in their lives. Just as one example, we use the catchphrase “It’s all about Jesus” at our own church. But in any case, we would have to splice out of our Bibles the whole book of 1 Corinthians if the Spirit never inspired us to talk about and think about himself.

MacArthur’s next biblical argument is not fully developed in the part of the book I have read so far, but is one that is often used by cessationists:

Argument As “God is not god of disorder but peace” (1 Cor 14:33,40) charismatic meetings cannot be inspired by the Holy Spirit.

Counter Argument One of the first rules of interpreting Scripture is to pay attention to the context.  It is unbecoming of someone of the stature of MacArthur to ignore this so absolutely here. The God of order is a God who inspires all the gifts of the Spirit, and requires that all of them be done decently and in order. So to say that the presence of the very gifts of the Spirit discussed in the portion of the Bible which talks about order disproves that they are inspired by the same Spirit is ludicrous in the extreme,

Argument: There is No biblical evidence for falling over in response to the Spirit

Interestingly, MacArthur later cites the case of Jonathan Edwards who recognised that strange things sometimes accompanied the moving of the Holy Spirit, and, like many charismatics today was less interested in whehter someone had falled over, than in the impaact on them and the evidence of a changed life:

Edwards argued with his usually lucid logic that intense physical phenom- ena such as “tears, trembling, groans, loud outcries, agonies of body or the failing of bodily strength” did not prove anything one way or the other about the legitimacy of a revival. He did not think that a time of extraordinary gifts of the Holy Spirit had arrived, so he denied (contrary both to some radicals of his day and to later Pentecostals) that ecstatic signs were the best evidence of a true outpouring of the Holy Spirit. At the same time, he insisted, neither were overwhelming emotional outbursts evidences against the presence of the Holy Spirit. . . . The real tests or “distinguishing marks” of a genuine work of the Spirit of God had nothing to do with such dramatic effects or lack thereof. Rather, these tests were found in the changed lives of those who were now living according to the dictates of the gospel and manifested the traits and virtues of true Christians

MacArthur restates Edwards famous marks of a genuine move of the Spirit as follows:

We might frame these tests from 1 John 4:2–8 in the form of five ques- tions: (1) Does the work exalt the true Christ? (2) Does it oppose worldliness? (3) Does it point people to the Scriptures? (4) Does it elevate the truth? (5) Does it produce love for God and others?

Like all charismatics I know personally, I would agree with those tests. And, I believe that the majority of the moves of God that I have witnessed myself would pass those tests. I would also agree with the bulk of MacArthur’s many criticisms against both some of the historical early pentecostals, and many of the charismatics he has in his sights. The thing is though, not every charismatic and pentecostal movement today has a connection to those early founders. These phenomena and beliefs have a habit of springing up independently all over the place as people come to the Bible honestly, and seek God. Secondly, the very fact that we are told to test the spirits, implies that on occasion there will be something genuine going on. Oddly, I suspect that MacArthur would give Jonathan Edwards a “pass” for the odd things that happened in his time, but he seems highly reluctant to give any modern charismatic a similar pass. It is not fair to blame every charismatic for the excesses and failures of some.

I have now read over a fifth of the book, and there really have been surprisingly few biblical arguments so far. I should say of course, that I have not listed any arguments against the so-called “Word of Faith” or “Prosperity” teachings, as I do not view them as core charismatic values but an aberration. There will be more to come!

October 25, 2013 Sam Storms shares a quote from Spurgeon on what charismatics call prophecy
Recent Comments
48 Comments | Leave a Comment
"A sermon that short would never be expected from a human Pentecostal preacher!"
David Lindsay BOT Preacher – Pentecostal sermon by ..."
"James McGrath, over on the Progressive Christian channel, has also had some interesting tings to ..."
Summers-lad BOT Preacher – Pentecostal sermon by ..."
"Our FL is an "Angel in Disguise" !!! ^w^Ef.866J.CO/T5011i"
Dif Global Faith and the Media – ..."
"There seems to be something more behind those red eyes story. I want to know ..."
Curls_of_Blue Queen Elizabeth’s Rainbow – Did Heaven ..."
Browse Our Archives
Related posts from Adrian Warnock

Hymn of the Day: When Morning Gilds the...
One of the interesting things about this text is that it appears...
view all Evangelical blogs
What Are Your Thoughts?leave a comment