Kevin Sorbo interviewed about his new movie, God’s Not Dead 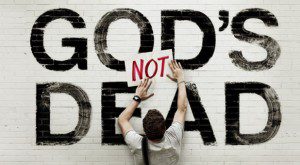 On March 21 the movie God’s Not Dead will be released to cinemas across the United States. On April 11 it will be on general release in the UK.  Having had the privilege of seeing a preview of the film I am very excited about it.  The premise of the movie is the interaction between a strongly atheist philospophy professor and a Christian student. It is professionally produced, and guaranteed to tug on the heart strings as well as provoke conversations.  Many churches in the USA are block booking seats and encouraging their congregations to bring their friends.

My new friend Rice Broock’s book by the same name inspired the movie, and in this video he is interviewing the lead actor, Kevin Sorbo.  For some he will be very familiar from the hit TV series, Hercules.

BUY THE BOOK THAT INSPIRED THE MOVIE IN THE UK FROM 10OFTHOSE.COM OR IN THE USA FROM THE AUTHOR

If you watch this video you will get a clear sense of the evangelistic passion that is the driving force behind this film. I also encourage you to watch the trailer, and think about ways you can get behind this.

March 19, 2014 Is the concept of privacy and discretion dead even among Christians?
Recent Comments
12 Comments | Leave a Comment
"I no more fear the nonexistence that will come upon my death then the nonexistence ..."
Mike The one question atheists can't answer: ..."
"The bottom line of all of this is that Romans 7 is expressing utter complete ..."
crossroman Disagreeing with Piper Over the Man ..."
"Yes this is good! - it (Romans 7) calls for the forced abandonment of the ..."
crossroman Disagreeing with Piper Over the Man ..."
"Thanks Richard."
crossroman Disagreeing with Piper Over the Man ..."
Browse Our Archives
get the latest updates from
Adrian Warnock
and the Patheos
Evangelical
Channel
POPULAR AT PATHEOS Evangelical
1

10 Questions Christians Should Ask Before...
Theological Apologetics
Books by This Author Books by Adrian Warnock