Whatever your faith background I strongly recommend you put aside some time to listen to this remarkable meeting of two  of the greatest minds of our time.  This will surely become one of the most respected and widely listened to episodes of Justin Brierley’s Unbelievable?  You can watch the video right here or listen at the link below.

There is much more light than heat in this conversation and it is truly wonderful to hear the mutual respect and affirmation between them. This is a highly commendable model of how we should engage with people we disagree with.

These days I often struggle to follow complex matters due to brain fog and fatigue. But I do get windows of better brain function, one of which allowed me to listen to this all the way through in one setting. Ironically considering I use the illustration of living as though it’s 3am all the time as a model of fatigue, it was about this time that I listened to this discussion, My initial goal, to be honest, was to send myself back to sleep after waking in the middle of the night. But as a sedative this conversation utterly failed as I found it so very interesting and engaging,  It also really wasn’t too complex at all. The mark of a truly great expert as both these men are is to be able to interact deeply with each other in a way the non expert can still fully understand. They both make the most complex and crucial questions of life easy to understand.

Atheists and Believers  are often dismissive of each other. Many encounters are just plain rude. I am tired of the kind of hostile “winner takes all” smack down approach we often hear. And tired of people on each side building straw men to tear down.

It is no secret that I am a big fan of Unbelievable? And Justin always hosts conversations in a way that encourages mutual respect. But what happens between Dawkins and Collins in this encounter has deeper roots than just having a great moderator.

Dawkins shows his respect for Collins by acknowledging where he feels his arguments are strong. Even at one point admitting that if there was an argument that would be most likely to make him believe in God it is the fine tuning one Collins was articulating. Equally Collins admitted the strengths of some of Dawkin’s arguments even stating he plans to rewrite a portion of one of his books as a result.

But what was more remarkable was their discussion of the example  of altruism that Collins had shown towards arch-atheist  Christopher Hitchens during his terminal cancer sickness.  It struck me whilst listening how if we really believed in the Survival of the fittest humans and wanted our own ideas to succeed Collins would not have tried to extend Hitchens life by facilitating his access to full genetic screening of his cancer cells. Dawkins expressed his deep appreciation of Collins for this act.

Towards the end of the far reaching discussion the subject of altruism came up again.  Can such acts of selflessness reallt be explained as a misfiring of evolutionary imperatives? They discussed the truly admirable nature of how some humans risk harm to themselves, for example by caring for vulnerable individuals with  covid in an ITU setting, putting themselves at risk of death. Does morality have some kind of transcendent essential even spiritual content to it?  One thing seems clear, Collins own friendship with Hitchens and attempts to help him had the direct result that Dawkins came to this conversation in a different attitude than he might otherwise have done.

It is popular among Christian circles to attack Dawkins, turning him into some kind of monster. I disageee. I heard a man who is honestly trying to handle the important questions of life.

Imagine a world where we all treat each other with thr dignity and respect these two men did, despite their profoundly different view of the Universe.

May 19, 2022
The final compassionate word on Will Smith vs Chris Rock
Next Post 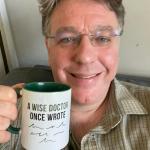 May 31, 2022 Connect with Adrian on Facebook
Recent Comments
0 | Leave a Comment
"and of course, no mention that HEK293 was extracted while the fetus was still alive ..."
Boba Williams Are COVID-19 vaccines made from aborted ..."
"What does it mean to love our neighbor?Mankinds idea of love and God/Jesus idea of ..."
D.M.S. Jesus gospel of social justice
"When it comes to the elect in our Lord Christ Jesus.We can find the poor, ..."
D.M.S. Jesus gospel of social justice
"Good post. Thank you.Tom Well's book "A Price For A People" touches on this topic ..."
Rick Owen J. I. Packer on the Atonement
Browse Our Archives
Related posts from Adrian Warnock