Continuing from the last blog, we asked: what is needed for real life-changing magic? Last time, we discussed planning and action steps, but does that really work? Turns out that the answer may be… “sometimes.”

Economist John Kay recently wrote a book on something called “obliquity.” Essentially that complex goals require us to use indirect methods to achieve the goal. Kay points out this concept in the financials of numerous companies. You might think that the primary goal of most companies is to make money, but in actuality, the companies that make money actually usually focus on something like creating a new drug, or a great service. The money comes from the focus on something else of quality.

In our personal lives, the money issue also applies. People who work to really fine tune or otherwise focus on an alternative path often have the money “just find them.” For instance, if you wanted stable reliable money from employment, you might get a computer science degree to augment that process. That is an indirect route to the goal.

A second example (one that I often am faced with when coaching people) is the process of getting into a relationship. What usually works more efficiently- asking as many people as you can to go out with you, or, working on a hobby you are truly passionate about while being sociable so you come across as profoundly interesting? It turns out that most “dating advice” books would steer you to the second path. What you are really working towards is passion. Expressing passion in one area means you are more likely to receive passion in the relationship department.

How does this concept relate to magic? Interesting enough, you can enchant for money, but as I covered in the last blog for Full Frontal Magic, you have to have a vehicle for this to come to you. You might enchant for money, but the plan is to increase sales. The method to increase sales probably involves things like social media posts, blogs, or even interviews. If you do not do well in these arenas, you sink your own magic. In all these cases, these indirect methods are several steps away from what the real goal is.

When we talk about magic, obliquity sounds related to one of the dreaded impediments to successful magic, the dreaded “Desire of Result.” While in the ritual or in magic, you must be entirely focused on the ritual. People do ritual usually because they want or need something.  Dwelling on the ritual afterwards deepens the sense of want or even worse, continually checking to see if the ritual is working deepens the state of doubt. Both states of mind work against the magic that you are doing. If you link the ritual to failure, doubt, or want, that connection tends to destroy the magic. Even the expectation of specific results often links to expectations for how the results manifest which makes them less likely. Like sand, if you grip the magic too tightly, it slips through your hands. While the magic is a direct request, the manner of its manifestation rarely goes in a predictable, straight, orderly line.

John Kay points out in his book Obliquity several points about the world that also fit with this desire of result tendency. Both obliquity and desire are related because the world is far more of a complex system then we generally understand it to be. It is a chaotic system. When we try to lock things down with the expectation of magic, we actually limit the possibility of expression making it far less likely. Second, we usually know far less than we think we do about all of the various swirls that can produce the results. Basically, when we focus on the specific outcome, we fail to pay attention to details and situations that could bring about the outcome. We fail to comprehend that we are not just an observer but we are affected by the swirls. When we focus too much on the result, we miss details that could propel us forward into the result.

In magic and life, happiness is a perfect example. You could enchant for happiness to come to you, but the results would most likely be completely unpredictable. The concept is too complex to be limited because the process toward the goal actually changes YOU which changes the concept for you. If you tried to pursue “happiness”, again, this is like gripping the sand too tightly. In each case, the process and experiences change the person and thereby change the goal itself. The magician has to let the process change them and the route is often very indirect.

John Kay takes his argument for Obliquity a little too far, mostly discounting formal planning altogether. Obviously, a plan is a set of guideposts that you have to consistently revisit and access, which he largely ignores. Coaches and planners already account for the inherent mathematical chaos of the world, although as saying goes “the best laid plans of mice and men…” implies that failure happens.

We all get on a roll with our enchantments and life transformations. For a while, everything falls into line… until it doesn’t. I think the times we feel stuck are the easiest times to use the concept of Obliquity. When you are stuck in one area, move to focusing on something else that actually gets to the root desire in your enchantments. For receiving love, maybe this involves actually displaying and being open to passion of different sorts. That could mean firing up a hobby or volunteering in ways that express real fire. Create art or writing with magic as magical acts in themselves. For self-transformation and self-love, start to purposely forgive others and even try loving the people who annoy you (loving your enemies is a bit rough, even for me). You could even do rituals releasing, forgiving, and asking for blessings on people that you have a rough relationship with. For gaining prosperity, the question should be more about ways that you can do/make/create something or service that you would actually buy (or that you think is so good others would buy it). If you are in stable employment, how can your actions and dress be imbued with the observable skills of someone that you would promote. In this case, you could tactically enchant to learn new skills or use self-change magic to transform yourself with new habits.

It is, of course, important for the magician to regularly shift their actions and energy. Hence doing the blessing and or other self-change enchantments. Certainly, you can probably think of your own instances where you might jump to a sideways track and actually make real progress on something else which will bring about changes and progress in your primary goal. These actions will shake up the possibilities and I bet, more often than not, in a couple months, you won’t be stuck anymore. 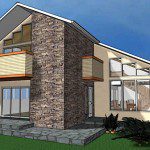 July 1, 2016
Adventures in Wortcunning: Windows, Walls, and Doors
Next Post