Between Two Worlds: Relocating During Covid-19

Between Two Worlds: Relocating During Covid-19 May 17, 2020 Brianne Raven Wolf

I’ve never relocated during any major pandemic like Covid-19, and I hope that I never will again. I’ve pretty much forgotten how many times I’ve moved in this incarnation for the most part. I have moved in some troubling times, including relocating in the military, overseas right before the Vietnam war in the South China Sea area.  Coming back to the United States as that war escalated and the civil rights movement was happening. Riots that were happening in Detroit, Chicago, Los Angeles and more. But nothing like this Covid-19.

Some may call it the invisible war or the invisible enemy. But it’s similar to when I came back during the Vietnam war, and I saw more combat deaths on the news every day than when I was there. And the same is happening now. Except in this war against the Covid-19 enemy, it’s not just soldiers and wartime civilians being killed, it’s a whole new group of people being killed. Our relatives, friends, the aged, the infirm, the young, and so many health care workers and first responders.

So why relocate during this pandemic? I’ve asked myself that a few times as well lately. The answer for me is that I trust my Goddess Hekate and The Universe. There have been many times in my life when I have received messages, and feelings during fairly deep trances. In mid February I was fortunate to attend my first and last PantheaCon in San Jose, California. On the long flight during the late afternoon and evening heading back to Wisconsin, I decided to do a long meditation and ask for some answers. And the answer I received surprised me.

My sister Shirley moved to Wisconsin in late September, 2018, to live with me. She’s partially handicapped, and was looking to me for help that eventually will require me being her caregiver. I’m in much better health than she is even though she’s younger. And she has told me for years that she’ll die before me. I keep telling her that it’s not up to either of us. During the meditation I received a message that I won’t forget anytime soon.“What makes you or her think that she’ll cross over before you”. Well, that pulled me out of that trance in a heartbeat.

Last September the two of us had taken a trip back to where she used to live in western New York State. She was really missing her friends there and I was going to visit my friend in Vermont anyway so it worked out well. From time to time over the next few months I would mention to her, do you want to move back? She only vacillated back and forth, and was concerned that I wouldn’t go as I had lived in Wisconsin so long and was pretty attached to living there. The morning after I returned from California I asked her again, and said that I would move for her good. I did tell her about my meditation and what it told me. She said that would be good for her if it would work for me. It was Wednesday morning.

Before I had left for California one of her friends had told her about an apartment building near where she used to live. It had been an old high school that had been totally renovated to accommodate over-55 aged people, and was handicapped accessible. There was only one two-bedroom apartment still available. On Friday morning I called the site manager, and told her that we wanted it. There was another couple ahead of us but they couldn’t move until they sold their house. I committed to it right then, and e-mailed her back the application. I knew when we were accepted that was where The Universe wanted me to go with my sister. Covid-19 or not, we were going.

As some of my readers may recall in a previous article I had vowed, when I was 17, that I would never return to where I lived as a child. If you didn’t read it, here it is.

I have found in my life when I have totally trusted my deities and The Universe, they haven’t let me down. It was when it wasn’t good for me, and I didn’t listen to the clues from them, that I had problems. They told me that I needed to return back to near where this incarnation started. And I did listen. We moved into our new apartment on Beltane. We were socially distancing and wearing masks when we went out anywhere in Wisconsin. We’re doing the same thing here. Until this Covid-19 goes away or there is a vaccine, we intend to stay safe and healthy.

A friend who lives in Paris asked me this in a message. “Do you feel like you have a role at this point in your life, apart from caring for your sister (which of course is obvious and important)?” My answer was “yes, I do feel that I have a very different role in my life now, especially being here. I have had ‘feelings’ that I think are from my great-grandmother Lucy, and that I need to research her lineage, which none of my siblings have done. I just have that ‘feeling’…maybe from Hekate or The Universe, that I’m supposed to be here. And not just for my sister. What that will be, I guess I’ll find out when it’s time for me to find out.”

So until next time, somewhere in the future… 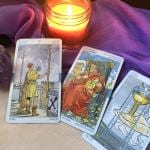 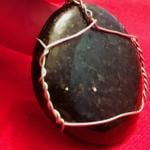 May 18, 2020 The Corner Crone: Working with Nuummite
Recent Comments
0 | Leave a Comment
"I applaud your success in taking back control of your time and I'm so happy ..."
Willow Rose Between Two Worlds: Dark Moon, Tarot, ..."
"Hospitality is a cornerstone of Heathenry, and I include Druidry, Asatru, and other Northern European ..."
K. W. Hammes Druid in the City: Druidic Thoughts ..."
"While I absolutely agree with the spirit of your comment, individual mental health capabilities should ..."
Laurie Between Two Worlds: Dark Moon, Tarot, ..."
"My mentor once told me, when I asked about fairies that when he was young ..."
David Hogan Irish-American Witchcraft: Why the Roots of ..."
Browse Our Archives
get the latest from
Agora
Sign up for our newsletter
POPULAR AT PATHEOS Pagan
1 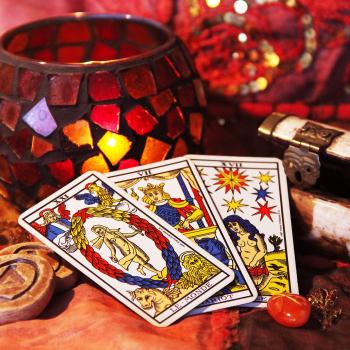 Skills and Strategy are Better than Foreknowledge
If you knew this time last year what you know now, what...
view all Pagan blogs
What Are Your Thoughts?leave a comment
Copyright 2008-2020, Patheos. All rights reserved.