Between Two Worlds: Remembering Mabons Past and Looking Forward

As Mabon 2022 gets closer, I’ve been reminiscing on Mabons past, and those to come. You may remember that Mabon is my favorite Sabbat. You can read about that here.

Why am I remembering and focused on Mabon now? Especially since it’s several weeks away? On Beltane 2020, during the pandemic, I moved to far western New York State. In-person Mabon’s didn’t happen. You can read about that here.

Where I currently live, I’m not connected to any pagan community except by Zoom. It leaves me very frustrated even though I realize that I have no choice. So lately I’ve been thinking of some of my favorite Mabon celebrations in years past.

There are two that stand out among all of the rest. The first was Mabon 2017. It was called Magickal Mountain Mabon. It was held in the mountains near Albuquerque, New Mexico. I was invited by a good friend of mine who lives near there in Rio Rancho. This year it’s called Mystic Mabon Southwest if you’re interested.

Having lived in Southern Wisconsin most of my adult life I was thrilled to attend it. I love the mountains, and being able to camp and attend Mabon there was such a wonderful and magickal experience. Waking up every morning to the crisp, clean mountain air is so refreshing. The programs were superb and very well attended.

One of the highlights for me was the musical talent. I met the Crow Women and was able to reconnect with S.J. Tucker and Wendy Rule, especially since I have most of their music. The musicians also did some workshops which were awesome. There are definite advantages to attending pagan events way outside of your local pagan communities. This was one of them.

The other Mabon that still stands out to me was Mabon 2019 in Central Wisconsin at the Deeply Rooted pagan community. I do know several of their members so I didn’t feel like an outsider at all. It was small in comparison to any in-person Mabon I’ve ever attended in the past. But being in a very rustic area had lots of advantages for me.

The first was no cell or internet services. I was able to connect to the people there and land Spirits without any distractions. And being in such a rustic area so far away from any large city was so refreshing. Among all the Mabon’s that I’ve attended, I prefer the smaller, more intimate ones.

As I get older I realize that simpler for me is better in pretty much everything that I do. I really enjoy my quiet time, walking in nature as much as I possibly can and away from large cities. Being with my deities outdoors is refreshing. I hear what they say and I love having that Divine guidance.

I’m not sure if I’ll be able to attend any in-person Mabon this year as I probably will be unpacking. But there’s always 2023. And I don’t intend to miss attending the Sabbat that I love. Mabon!

Hmmm, wonder where we’ll meet again…next time in the future!

August 11, 2022
The Corner Crone: The Empath’s Oracle by Raven Digitalis
Next Post 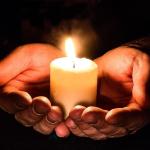