When you cease to learn new information or are insistent on doing things the way you have always done them, you are, in effect, disempowering yourself from more effectively enacting change in the modern world. (p.70)

Warrior Magic: Justice Spirituality and Culture from Around the World is a deeply satisfying read. The book is dedicated to Ares in the hope that he may “continue to fight alongside us […] as we hold the line against injustice”. Prower calls his readers to join him on a mission of combating the systemic wrongs we see and experience in the world, and then equips us for that unending battle by examining the history of justice warriors across both ancient and modern civilizations. 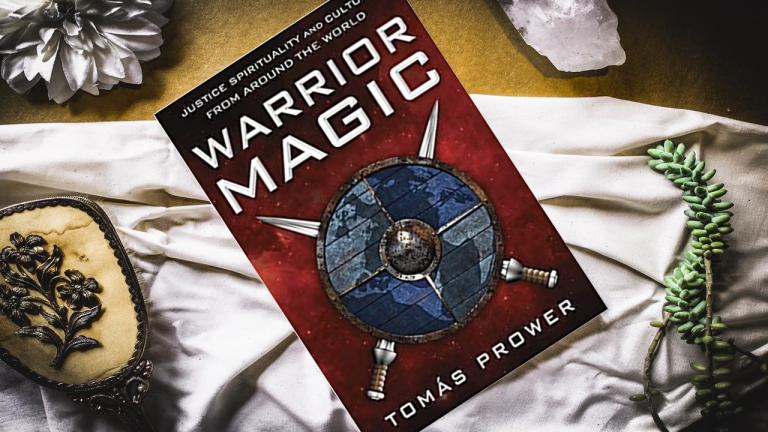 To that end he covers cultural histories, deities, and legends of the greater Middle East, Sub-Saharan Africa and the lands of the African Diaspora, Europe, India and Southeast Asia, East Asia, Oceana, and the Americas. Reading through these chapters is like settling in by the fireside for an intimate chat with one of your favorite cultural anthropologists. Prower’s prose is engaging and at times quite lyrical, which makes Warrior Magic difficult to put down.

Each chapter begins with a brief cultural history of the inhabitants of particular geographical region, followed by a “Takeaway” for the reader to incorporate into their own justice magic. For example, in the Mesoamerica section of the chapter on Latin America, Prower examines what we may learn from the Mexica culture and warriors, whose experiences might be aligned with lessons learned from the Wheel of Fortune:

[T]heir culture lived through a complete rotation of the wheel of fortune. Starting off as a wandering band of persecuted refugees from northern Mexico, they settled on a new homeland and, through severe violence and merciless brutality, became the most powerful empire in the region. They were on top of the world, their rule was universal law, and no one came close to threatening them thanks to the overbearing power of their military. (p. 291)

They thought they could never be defeated, yet the people they oppressed hated them so passionately that when the Spanish colonizers invaded, they joined up with them to defeat the Mexica, thus bringing about the fall of the Aztec empire. The “Takeaway” that Prower offers to his readers is to “train yourself to become aware that no victory or defeat lasts forever, and a reversal of fortune awaits commoner, emperor, and warrior alike”. (p. 291)

In the chapter on Latin America I also gained a more culturally nuanced understanding of one of my favorite childhood Christmas traditions, Las Posadas. As a child in San Antonio, Texas, I remember all of the emphasis on this nine-day festival during which children reenact the journey of Mary and Joseph as they search for a room at an inn. In Warrior Magic I learned that the Mexica warrior god Huitzilopochtli was celebrated during the ancient Aztec empire’s month that occurred around the same time as what we now call December. The Spanish conquerors overlaid the Mexica’s existing days-long ritual celebrating Huitzilopochtli’s winter solstice birth with the Catholic Las Posadas celebration, an act of cultural appropriation that is still going strong today.

Throughout the book Prower also invites other social justice warriors to share some of their insights on how they equip themselves to be effective agents for real change in our world today. Katrina Rasbold’s section on Brujería is one such dynamic speak-truth-to-power moment:

My Wiccan friends wince when they visit and see the kinds of spell work I have cooking on the altar for other people. What they don’t get is that an attitude of “harm none” comes from a place of tremendous privilege. The intent is admirable, but when it comes to practical application, sometimes you burn down the house and salt the earth to build something better. “Harming none” presumes that you are comfortable with a repeated beat down and doing nothing about it. (p. 317)

Warrior Magic is a compelling, inspirational book that will equip those who identify as social justice warriors as they engage in the seemingly unending battle against systemic oppression, legislatures that continue to pass laws that strip away our personal freedoms and rights, and a worldwide rise of fascism and authoritarianism. This book will strengthen your resolve and renew your energy to keep fighting so that the arc of the universe bends toward justice. Buy one copy for yourself and a second for a friend so that you may both become warriors for equality and peace, then go out and be the change you seek in the world.