In our last basics post, I mentioned the world we dream with the gods. But what is this world? Where does it come from, and how can we walk in it?

The world we walk in is called the West.

The otherworld the gods inhabit in the Otherfaith is called variously the West, Westernlands, Western Faery, and Faeryland. The more common term we use is the West, since that is the name the spirits themselves use most often. It is also connected to their origins in this world (the Western world).i

But the West is not just our world reflected – it is inhabited by the gods, the spirits, and its land is host to their epic stories. The West shimmers and glows. It is not a mirror – it is a sister world.

The West is crafted by the gods on the edge of Faeryland and the mortal realm, with a “rod of mortals” and a “root of Faery”. the Clarene creates the West so it is irrevocably connected to the worlds she loves most. And that is what the West is founded on: love. This part of what makes the West different from our world. (In our cosmology, at least.)

Another difference is that it is Faery. the Clarene is a faery (princess), and those who dwell in the West are others, not human or not quite human. (That is where we get our name from – working with others.)

The West is both a land journeyers of the otherworlds can visit and a metaphor for understanding our (as Other People) relationship to our material world. The West influences our ethics in the Otherfaith, after all, and so touches all of us regardless of our ability to journey to strange lands.

In the dedication ceremony to the Other People, for example, we say, “I have seen the Gate and pass through it.” But not all Other People will see the sacred gate in our otherworld. Rather, this statement is symbolic. The dedicant has seen the boundary of the faith, of the People (“Gate”) and is joining the faith (“passing through”). The Gate is not only a Real Place in the otherworld, it is also the boundary of the Otherfaith.

This influences our prayers and also our lives. We can see parts of the West (and spirits) present in everything. The cycles in the West are connected not only to this mortal world but to the followers of the gods.

Reality of the West

This leads us into the reality, or presence, of the West in our world. The gods and spirits do not stay in their own world, and their world doesn’t even stay by itself! One example is Seattle, which is full of Otherfaith spirits and presence. Another is Appalachia, one of the places the Laetha is said to have fallen into the West from. (Another is the Rockies.) I first met the Ophelia on the Catalina Mountains here in Tucson (and earlier, unnamed, at a small river in New Mexico). the Dierne and loud cities of the West are present in downtown, not just in the way it reminds me of the otherworld but in the palpable presence and air of the space.

One does not need to journey to know our otherworld. It is right beside us, connected to our world as we are to it.

In an interpretation of one of our creation myths, someone asks: “…does [the West] belong to all who live there? Can one be of the Westernlands but not be there?” And the answer is yes! The West is with us, and we simply need to reach out our hands. We have to open our eyes and hearts to his presence.

Yes, journeying through trance, being taken to Faeryland – those things are part of the Otherfaith. For some people. The West isn’t just reserved for those who can toss their souls outward, though. It is for anyone who wants to call it home.

(iThe part of the Western world I have the most interaction with and the gods, as far as I’ve seen, speak most to is specifically North American/US life, however. Please keep that in mind.) 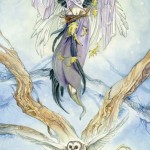 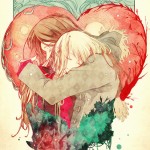 February 15, 2014 Musings: Love
Recent Comments
0 | Leave a Comment
Browse Our Archives
get the latest from
Aine Llewellyn - Dalliances with Deities
Sign up for our newsletter
POPULAR AT PATHEOS Pagan
1