One common sentiment I see popping up in polytheist and Pagan spheres time and again is that ‘the Gods are not safe’. True enough. I believe the Gods are real and can impact our lives, after all. Yet I often find myself sighing in frustration when I run into blog posts cautioning up and down about the dangers of the Gods.

For as much of a meme as ‘the Gods are not safe’ has become, we haven’t really explored the implications of what that means. At least not as much as I’d like to!

I was seventeen when I very foolishly gave myself over to a God. To be fair to teenage me, I had been practicing a Wiccish form of Paganism for a few years at that point. I believed I was well read. (I was adequately read. I had read enough to not completely ruin my life.) I was trying to reach out and make contact with Divinity.

In all honesty, I don’t know that I would have truly grasped what people meant when they warned of unsafe Gods and dangerous spirits until I experienced directly. That doesn’t mean that education and warning is pointless. It is just that sometimes we find ourselves hearing the warnings and going, ‘Yes, that is exactly what I want.’

How should we approach educating about the dangers of interacting with Deities? We can avoid making snide or dismissive comments toward non-theists or non-polytheists, for one. It isn’t uncommon to find someone claiming that our Gods are dangerous…unlike those archetypes that other Pagans mess around with. I love snark as much as any other Millennial, don’t get me wrong. I just don’t think it serves much of a purpose here.

To educate on the dangers of approaching and interacting with Gods, we first need to know what those dangers are. There is room for vagueness and imprecision – we’re dealing with Holy Ones – but having some concrete ideas of what to expect is important. There are some broad warnings we can give that will apply to most Gods. But a lot of our warnings will be best attached to specific Deities, for maximum utility.

When we know what the specific pitfalls are along our path, we are better prepared for them. We are better able to approach the Gods as They are and to trust Them. A quote from Morpheus Ravenna that has remained with me since I first read it is this:

Trust is a subtle thing. I trust the Morrigan, completely. But trust Her to what? …I trust Her to be Who and what She is.

I think we are very, very good at giving broad warnings about the Gods. I think we are less good, at a community, at getting into the murky, muddy specifics. Even though people warn up and down, left and right, about not oathing to a God, we still see tons of inexperienced practitioners doing so. Some of them are happy with their oaths. Some of them really, really aren’t.

Another aspect of warnings that we often neglect is what it feels like when you encounter a God. It’s a bit different for everyone, right? And some people don’t experience anything like that at all. I do think it is fair to say that when one does encounter a God, especially a God that has taken specific interest in you, it can be overwhelming. It can be overwhelming in a wonderful way. I know that I adore feeling the tingle and pressure and security of the Holy Ones around me. I also know that being in that state doesn’t exactly lead to critical thinking.

The desire to become closer with a God, to answer Them if They have called to you, can knock out some of our other senses. Preparing people for that may help them make better decisions.

John Beckett wrote about unsafe rituals recently (his post was actually what got me wanting to write on this topic), and he brought up that life is dangerous. I thought that was a good point. Just as we shouldn’t shut ourselves away from the world because it contains dangers, we shouldn’t cut ourselves off from the Gods because They can be frightening and terrific.

Ultimately, it all comes down to risk vs. reward.

Knowing the specific positives and ‘negatives’ of a Deity or other entity allows us to make informed decisions about working with Them. Commonly we see this play out with newbie Pagans who pick and choose which Gods to toss into rituals or spellwork without much thought. This can, and often does, end up backfiring.

As an example: in the Otherfaith, the Laetha is a God of transformation. He brings change. So we may pray to Him for change. He’s also the God of fire and destruction. His transformation like a burning forest fire. Surely, it does change the landscape. New life does sprout from the ashes. It is not, perhaps, the best change to pray for in our lives. A better option would be the God of commitments, the Clarene, who even in Her stability offers the chance for change and new things.

That isn’t to say we can slyly avoid any risk to ourselves, if we just ‘choose’ the right God. When I think of the Gods being ‘unsafe’, I think of how even the positive experiences with Them are enrapturing in the best and worst ways. We are reaching out to the ineffable. Sometimes the fires of the Gods will have to pass through us. Sometimes we don’t know as much as we thought we did about our Holy Ones, through absolutely no one’s fault. Not even our own.

I hope to continue exploring this topic in future posts, getting into more nitty-gritty details. If you’ve had experiences that made you realize the Gods were dangerous or maybe a bit more than you thought I would love to hear them. 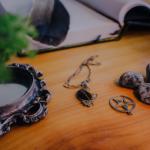 November 20, 2019 A Goodbye to Witchvox
Recent Comments
0 | Leave a Comment
Browse Our Archives
get the latest from
Aine Llewellyn - Dalliances with Deities
Sign up for our newsletter
POPULAR AT PATHEOS Pagan
1