In the Face of Violence, Pray for Peace

In the Face of Violence, Pray for Peace November 15, 2015 K. Albert Little

The collective wisdom of the Internet can make anyone question the trajectory of humanity in the same way that the violence which spurs it into action can do the same.

In response to the violent acts of terrorism which have shaken France this weekend everyone and his conservative grandmother has an opinion on how we ought to respond. And they aren’t shy about sharing.

Suggestions run the gamut from the moribund to the fantastical; from closing our borders or deporting all “the Muslims” to dropping a nuclear armament on the Middle East.

Surely if we can just build one big enough.

But what’s truly frightening and sometimes difficult to navigate amongst the sea of kneejerk reactions is how the even-keeled Christian ought to respond in the face of such violence, and then such vitriol.

We, and I mean all of humankind, were built by our Creator in a particular way: to yearn for justice. This is, at times, the very fundamental narrative of humanity. And justice is good. We have, in our capacity as human beings, a built in sense of it. We know the shape and the feel of justice, or what it ought to feel like, and we know when we’ve been wrong.

And we have been wronged.

When violence like this takes place—whether in New York, Beirut, or Paris—all of humankind cries out for justice.

But we cannot equate justice with hate.

Too many trolling Facebook, Twitter, and the comment boxes of articles hither and thither are not foisting the flag of freedom and the cause of righting wrongs; it is a different flag altogether which they wish to wave on Capitol Hill—or from the top of the Eiffel Tower.

This is not the Christian response.

See, we as disciples of Christ have always been called to, as it were, march to the beat of the different sort of drum.

Of course this is difficult. Jesus, in his ministry on earth, braced us to this end.

But however right it may feel we were never called to follow our earthly passions and inclinations unto certain doom. We are called out of the world, while living within its realities.

So what is the Christian response to such horrific violence?

It begins by uncoupling the urge for violence with the desire for justice. Violence begets violence; we, as Christians, are called to break that cycle.

We as Christians, as far as we are called to represent the light of Christ, and the right justice of God, are called to likewise be a people of peace.

The first words of the resurrected Christ, appearing amongst his apostles, was not, “To arms! To arms!”

They were, “Peace be with you.”

And peace does not mean sowing hatred towards our fellow humankind.

From the very beginning, we as Christians were called to live in that disorienting tension between justice and peace.

From the moment that St. Peter, in the Garden, rose up with his sword to strike down those that came to take away our Lord we were called to live in that tension.

From the very act of Christ to die, innocent of sin, on the cross we were called to live in that tension.

As we begin to digest the complicated nature of the events that unfolded this past weekend in Paris we Christians are charged with the difficult task of coming to grips with our reactions; at the crossroads of the knowledge of our faith and the inclination of our hearts.

What we know to be the truth, and what we feel ought to be the solution.

Fundamentally, as Christians we must wrestle free the urge for justice from the burden of hate.

Amidst the clamour of a million opinions, of the calls for further violence, for bombings and troop deployments and deportation, there is one voice: loud and clear and deserving of our attention. Cardinal Vingt-Trois of Paris, speaking from the very seat of the city at the heart of our conversation wrote this,

Faced with the violence of men, may we receive the grace of a firm heart, without hatred. May the moderation, temperance and control that has been shown so far, be confirmed in the weeks and months to come; let no one indulge in panic or hatred. We ask that grace be the artisan of peace. We need never despair of peace if we build on justice.

I am not—although I have been in the past—a pacifist. I don’t suggest that a right solution to what happened in Paris won’t necessarily require a calculated and perhaps militarized response but I will say this. The Christian response, made clear by Cardinal Vingt-Trois, is a call to prayer, not to hate. To a firm and resolved heart, resolute in the peace of Christ, not the hatred and despair of the world.

“But I say to you,” said Jesus, “Love your enemies. Pray for those that persecute you.”

We are called to be different. 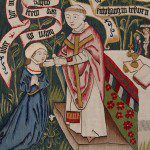 November 5, 2015
Eucharist as Evangelist: Let Jesus Do the Talking
Next Post 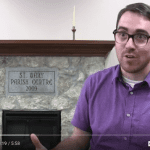