A few months ago, John Beckett wrote, in a post entitled “Five Ritualists at Dinner”:

“Now imagine inviting five of the best ritualists in the modern Pagan world over for dinner.  You discuss ritual theory over soup, logistics and presentation over salad, the symbolism of your tradition over the main course, and your relationship with your gods over dessert.  By the time you’re pouring after dinner drinks, somebody’s got a script and a red pen, somebody else is digging in their bag for a book, two people are clearing the furniture out of your living room and the last one is raiding your candle stash. …”

This got me thinking about what five ritualists I would invite to dinner.  This is the first in a series in which I showcase some of the best ritualists I have met (in no particular order).  I’m sure there are many more who I have not met.  Share with me in the comments who you would invite to your ritualist dinner.

Steven Posch is the founder of the Twin Cities’ oldest ongoing coven, the “Poet Laureate” of Paganistan, storyteller and ritualist.  He has been called the “Pagan rabbi” and “the most dangerous ritualist in America.”  He is a witch and likes the term “warlock” too.  Posch says that his life has been a tribute to the work of three men: Robert Graves (The White Goddess), Fred Adams (Feraferia), and Tony Kelly (Pagan Movement in Britain and Ireland).  Posch recently started blogging at PaganSquare.

At Pagan Spirit Gathering a couple of years ago, I attended a workshop by Posch on his “Thirteen Redes to Better Ritual”.  Posch has actually done a YouTube series where he lays out his 13 Redes.  The production quality of the videos is very poor.   (The first one is especially bad, as there is the sound of traffic in the background.)  I say this, not as a criticism, but so you are prepared and don’t give up, because it is definitely worth watching.

It should be noted that the kind of ritual Posch does is very different from the kind of ritual that Shauna Aura Knight does, which I wrote about in the first part of this series.  Shauna does  ecstatic ritual, but Posch’s rituals are dramatic.  Both are intended to help participants connect with the mystery, but they go about it in different ways.

So here’s the Cliff’s Notes from Posch’s workshop:

Rede #1:  Think outside the circle.

According to Posch, the first question you ask in ritual planning should never be “How should we cast the circle?” Instead, consider the possibility that no circle needs to be cast.  You don’t need to create sacred space if the place where you are doing the ritual is already sacred. And if you’re going to call the quarters, think outside the box.  Do something different, like blow horns at the quarters.  I attended multiple rituals that Posch led at Pagan Spirit Gathering, including a sunset ritual, where he used a horn to announce the sunset.  It was simple and beautiful.  He describes it as a “real encounter” between people and that amazing god on whom our lives depend, the Sun.

If you want to have each ritual participant have a private consultation with an oracle, then do the math. Twenty people at two and half minutes apiece will take almost an hour. And keep in mind that there will always be some people who take longer.  What are the other people to do while waiting?  Standing in line is the death of any ritual.  If you’re going to do this, consider using multiple oracles.  Three oracles means one-third the wait.

According to Posch, about the maximum number of people you can add to a Wiccanesque circle is 20.  Much more than that and you start to have problems.  A ritual is kind of like a recipe, he says.  You may be able to double the recipe and get the same effect, but if you quadruple it you have problems.

It doesn’t need to be a complex story, or even a verbal story.  A procession is a story.  Posch says that the very best ritual gives its own direction; no explanation is necessary.  Personally, I think this is a bit idealistic.  Certain types of people can get along in a ritual with little direction, but others need an invitation.  And without a basic level of direction, you get chaos.  But I think what Posch means is that direction can be given with actions more than with words.

Rede #4: Plan from the center.

This is one of Posch’s best pieces of advice, I think.  Posch advises not to start planning a ritual with the circle casting.  Don’t plan the ritual chronologically, with the order in which the ritual will performed.  Instead, start from the center.  Ask “What is this ritual about?”  Ritual, says Posch, needs to be about one thing.  It should have a single focus.  If you want to focus on two gods, then the focus should be on the relationship between the two.

Ritual, says Posch, is about what we do together.  It gets us out of ourselves and helps us touch something larger than ourselves.  Posch discourages what he calls “funhouse rituals” where participants move from one little scene to the next.

This is another one of Posch’s best pieces of advice, in my opinion.  Mystery, explains Posch, is the “radically other”.  And ritual is a technology for experiencing that mystery.  Never explain, say Posch.  At least, don’t explain with words.  Instead, explain with the liturgy.  Give people space to have their own experience.  Ritualists should provide the opportunity for people to have the experience, but leave room for the participants to give it their own interpretation.

Rede #7: Foamhenge must be destroyed.

Ritual, even dramatic ritual, is not about pretending.  It is not RenFaire.  Instead of building a fake Stonehenge, we need to be authentically present to the place where we are.  I think this is another really good piece of advice.  Posch says we need to “stop standing with our backs to the rest of the world.”  Use the landscape.  Instead of using tables as quarter altars, use posts, standing stones, or something else that works with the landscape.  Use real flowers.

Posch insists that ritual leaders should not wear glasses during the ritual because it distracts from the authenticity of the experience.  I have to disagree with him here.  Not everything can or should be memorized.  And if you are going to read, and you need glasses, use them!

This is another excellent piece of advice.  For example, if you choose to have the ritual leader enter the circle from the east, that is conceptual approach to ritual.  Instead, have the leader enter from the woods, whether the woods are in the east, west, north or south.  That is a visual story.

Learn theatrical techniques.  Take an acting lesson.  Learn to project your voice.  Learn your lines.  It’s worth committing to memory.

If someone tells you the ritual you designed was good, ask why was it good.

Pagans think of rituals as sacrosanct, and so we shy away from ritual critique.  But Posch is emphatic that “public action mandates a public critique”, and that this is the only way we can improve.  “No ritual is so good it can’t be improved,” says Posch, “and no ritual is so bad we can’t learn something from it.”  Posch describes a ritualized form of ritual critique.  This should be performed the day after the ritual, not immediately after.  Participants sit in a circle.  Each person shares one thing, and one thing only, that they liked, or thought worked, or was effective.  Proceed clockwise.  The ritualist goes last.  Then go the other direction, counterclockwise.  Each person states one thing and one thing only that they would improve.  Any criticism must be followed by advice for how to improve.  The ritualist may not respond to any of the comments.

For Posch, contemporary utility trumps tradition.  There are negative and positive sides to tradition.  The most important question though is, “Did it work?”  How do you know if it worked?  According to Posch, it worked if the participants are “screwing in the bushes afterwards.”  Our job as a ritualists is not to provide perfect rituals, but to give the best ritual we can, learn from ourselves and others, and get better.

Posch concludes with this vision for Pagan ritual:

“Paganisms are not proselytizing religions.  We don’t have to proselytize.  Our job is to provide for ourselves a vibrant, flexible, and ongoing sustained pagan culture that is so beautiful, so rich with, and so sexy and so desirable that people will want to come to us because they see us and they say, ‘I want what they have.'” 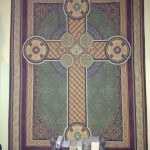 March 27, 2014
Love, Earth, Body, Ritual: These are the threads of my emerging spiritual tapestry.
Next Post 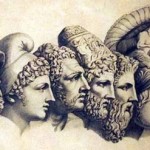