The Secret History of the Triple Goddess, Part 1: Triads, Triplicities, and Trinities

The origin of the Robert Graves’ Triple Goddess has been hidden from us, because the text on which Graves most likely relied upon was never translated into English … until now.  (I actually paid a Latin scholar to translate it.  No, I’m not made of money; I’m just obsessed.)

Unfortunately for you, I will not be revealing this wonderful text until Part 3 of this series.  (Hey, I paid for it, and now I get to decide when to do the big reveal.)

I’ve been wanting to write this essay for about 7 years.  What finally gave me the much needed kick was two things: First, I got the chance to chat with Jason Mankey about Robert Graves recently when Jason had me as his guest on the Raise the Horns Radio show.  Second, Christopher Scott Thompson published a guest post at Sermons from the Mound, where he theorizes that Graves’ Triple Goddess is derived from Nora Chesson’s Three Brigits of the Ulster Cycle.  It’s a wonderful article, especially if you’re interested in Celtic myth.

Two things stood out to me about Thompson’s article though.  First, while he makes a good case that Graves Triple Goddess was influenced by the Celtic Brigids, this cannot be the only source.  For one thing, the Brigids were not associated with the moon or its changing face.  What makes the Triple Goddess unique is not that there are three of them, but that She is three-in-one.  (More on this below.)  Second, Thompson writes this in conclusion: “Although many Wiccans and other neopagans accept the theology of the Triple Goddess as Maiden, Mother and Crone without question, this trinity actually has no clear precedent in ancient myth.”  This is patently false, as I will proceed to demonstrate over the next 5 posts.  (Are you ready?)

It has been observed that many modern Pagans have a tendency to uncritically relate every instance of the number three in ancient myth or iconography to the symbol of the Triple Goddess, causing them to syncretize goddesses who do not fit the pattern. In the same way that Freud (and Hargrave Jennings) have been accused of seeing phallic symbols everywhere, many modern Pagans see triple goddesses everywhere. Even a cursory perusal Pagan books available at any bookstore confirms this.  This is not a new phenomenon. G.W. Bowerstick (Hellenism in Late Antiquity) has drawn attention to the fondness of late pagan authors for identifying “trinities”.  During the Renaissance, humanists Pico and Ficino also searched for trinities among pagan myths.  And the authors of the Greek Magical Papyri seemed to think that tripling deities just made them better:

However, the Neopagan Triple Goddess is unique in that She is a trinity, or tri-unity, being three-in-one.  There are in fact three ways that so-called “triple goddesses” (or “triple gods”) may appear in myth and iconography: triads, triplicities, and truinities (or trinities).  A “triad” refers to three separate beings who are united in some relationship.  Examples include Zeus, Neptune, and Hades, who are related by their dominion over the three realms of the cosmos: sky, sea, underworld.  Together, the triad expresses some limited sense of completeness or perfection, but not unity.  The individuality of the members of the triad remains dominant.  Another example is the Celtic Brigids, who were patrons of poetry, smithcraft, and healing … as well as, Chesson’s story of “The Three Brigits”.  Georges Dumezil’s trifunctional gods/goddesses of sovereignty would be another example.

A “triplicity” refers to one being who has three forms.  Examples include the triplicate goddesses (Matres) found in continental Celtic iconography, which appear as three identical maidens (alluded to by Thompson in his conclusion).  Another example is early versions of the goddess Hecate, who appeared in early Greek art as three identical maidens standing around a pillar.  In a triplicity, the membership in the group overshadows the individuality of the members of the group.  The individual members of a triplicity have lost almost all of their individuality in the group identity, thus they appear identical or nearly-identical.

Triads and triplicities are two ends of a spectrum which ranges from complete individuality to complete unity, respectively.  Between these two poles is the “triunity”, or trinity, the three-in-one.  (To avoid confusion with the Christian concept of trinity, I will use the term “triunity”.)  A triunity refers to one being with three distinguishable “persons” or aspects.  A triunity differs from a triad in that the whole of a triunity is greater than the sum of its parts, while it differs from a triplicity in that the identity of the whole (the triunity) does not subsume the identity of the parts.  In other words, the unity of the whole could not be expressed in the absence of the individuality of the parts.

Obviously, the best example of a triunity is the Christian “Trinity”: Father, Son, and Holy Ghost.  Another example is the Hindu Trimurti, the three aspects of the ultimate unknowable reality, Brahman – Brahma (creator), Vishnu (preserver), and Shiva (destroyer).  While there are many examples of triads and triplicities in ancient art and myth, true triunities are rare.  Graves’ Triple Goddess is an example of a triunity, the paradox of three goddesses in one and one goddess in three.

In 1946, Graves published King Jesus. There he described a “Great Triple Moon-goddess”, who he identified as the tri-form goddess of birth, love, and death. In the narrative, these take the form of Miriam (Jesus’ mother), Mary of Cleopas (Jesus’ potential wife), and Mary Magdalene (a witch who is a disciple of the old goddess religion).

(Note that the terms “Nymph” and “Bride” are synonyms for Graves.)  It is worth noting that it is the first of these trinities (Mother/Bride/Layer-out) which primarily concerns Graves in The White Goddess, but it is the last (Maiden/Mother/Crone) which ultimately became the popularized version of the Triple Goddess in Neo-Pagan myth.  The poetic “Theme” which is the subject of The White Goddess Graves (or one of them) is “the birth, life, death and resurrection of the God of thee Waxing Year; the central chapters concern the God’s losing battle with the God of the Waning Year for love of the capricious and all-powerful Threefold Goddess, their mother, bride and layer-out.”  Graves’ most elaborate description of the Tripe Goddess is as follows:

Here we see that Graves’ Triple Goddess was neither a triad, nor a triplicity, but a triunity to rival the Christian Trinity: She is three-in-one, always in process, and manifest in the heavens (moon) and earth (seasons) and in us (the human life cycle).  In the following posts, I will trace the evolution of the Greco-Roman goddesses Hecate/Diana until they reach the form that inspired Robert Graves’ Triple Goddess.

November 12, 2014
Tuesday with Mankey: Raise the Horns Radio
Next Post 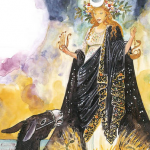 November 14, 2014 The Secret History of the Triple Goddess, Part 2: The Search for the Triple Goddess of Antiquity
Recent Comments
0 | Leave a Comment
"Ironically, the pagans have stumbled upon evidence that there will be an Armageddon exactly when ..."
The Penitent Man Shall Pass Call for a Pagan Community Statement ..."
"John H.Halstead...Someone wrote or said. Be the change you want to see in the world. ..."
Toni Stamps 13 Things You Don’t Need to ..."
""petty and defensive"?: "Are you foolish enough to think christianity is the elder?""
John H Halstead 13 Things You Don’t Need to ..."
"Attack? This isn't my faith :)Is it yours? You come accross more christian....petty and defensive."
Toni Stamps 13 Things You Don’t Need to ..."
Browse Our Archives
Related posts from The Allergic Pagan