“Celebrate Wildness: Magic, Mirth and Love on the Feraferia Path” 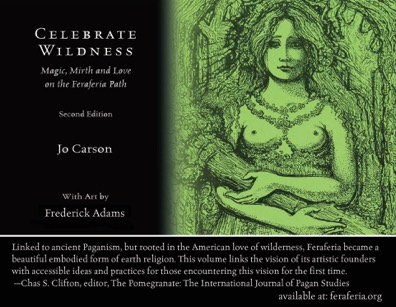 A few years ago, I had the pleasure of participating in a Feraferian ritual at Pantheacon. I was deeply impressed by it. The ritual was a sensory immersion (or as close as you can get in a hotel conference room). There were statues of the god and the goddess and poles decorated with colored pennants and the artwork of Feraferia’s founder, Fred Adams. There was music, dance, and poetry. There was a communion of berries and water, an anointing with scented oil and aspersion with water, and an offering of candles. 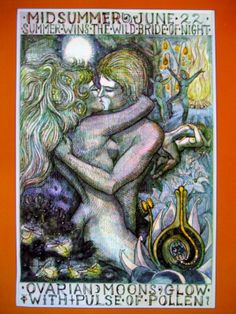 Jo Carson’s book, Celebrate Wildness: Magic, Mirth and Love on the Feraferia Path, is like that ritual. It is a work of magic. It is as close to an immersive experience as you can get with paper and ink. Celebrate Wildness is a luscious book. It may seem strange to use a word like “luscious” to describe a book — unless it is perhaps a book about food — but luscious it is nonetheless. Reading it is like eating a sumptuous meal. In fact, to say that one “reads” this book does not do justice to experience that is Celebrate Wildness. “The first pages are an initiation in themselves,” writes Carson. And indeed, Celebrate Wildness felt a little like an initiation. And for those wanting more, there is actually a self-initiation offered at the end of the book.

The author, Jo Carson, is the keeper of the Feraferian tradition. She offers an insider’s perspective on Feraferia and the vision of Fred Adams which inspired it. The book begins with an introduction to the tradition. For those who are unfamiliar, Feraferia was one of the earliest Neo-Pagan groups. The word feraferia means “celebration of wildness.” The tradition grew out of a visionary experience which its founder, Fred Adams, had of the Divine Feminine: “Fred had a conversion experience one day in 1956 where suddenly he felt a profound certainty streaming throughout his body that ‘God, the divine, is female and is alive everywhere around us!'” While Feraferia remained small in numbers, it had a disproportionately large influence on the young Neo-Pagan movement, due undoubtedly to the charisma of its founder and the appeal of his vision. Fred Adams, summed up the purpose of Feraferia in 1967 with these words: “Our goal is the unification of ecology, artistry, mythology and liturgy. In such love-play-work humanity may achieve reunion with Great Nature, ourselves, and our own souls …”

“Our crying need is for re-immersion in those great cyclic rhythms of the sorely threatened earth which soul-replenishingly unite us with nature and cosmos. The foundation of all sensitive, religious devotion to Life, and the basic measure of a people’s spiritual potency, is the seasonal celebration. Through enthusiastic communal celebration of each seasonal tide at its titanic full, the rudimentary communion of humanity with all nature may be restored and maintained. Without this communion, we may never regain our instinctive sense of natural enjoyments, proportions and balances.” 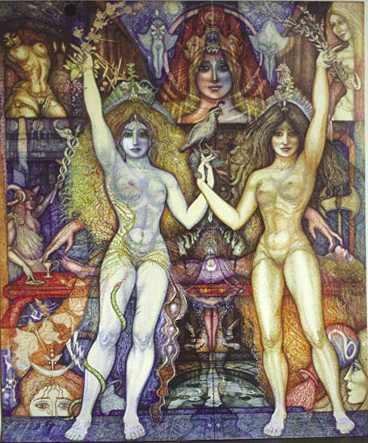 But what makes Celebrating Wildness a true treasure is the collection of Fred Adams art, over 50 illustrations, in addition to dozens of photographs depicting early Feraferians and their sanctuaries. As Carson says in the introduction:

“… on the right, each page is filled with an image for wonder and contemplation. On the left, glimpses of the path. These glimpses include, for example: discovering the heart of the earth, and appreciating her for the all important, multi-faceted Goddess she is; opening to her role as sacred Daughter, a long-neglected function of the Divine Family; realizing the possibility that she is joyful, that pleasure and beauty are our basic rights as humans, and that we can live lives of cele- bration rather than grim toil and competition. The laughter of the Gods pervades this book.”

Indeed it does.  Evoe Kore!

My only criticism of the book is that I would have liked for it to have included some more of Fred Adams’ own lyrical writing. But I expect that will be forthcoming in the next volume about the ritual practices of Feraferia. 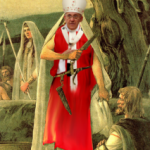 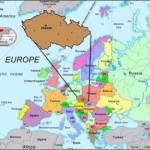 June 26, 2015 Global Eco-Paganism: Czech Republic
Recent Comments
0 | Leave a Comment
Browse Our Archives
get the latest from
Pagan
Sign up for our newsletter
POPULAR AT PATHEOS Pagan
1

Beyond Binary Witchcraft: Essential Reads for...
Agora
Related posts from The Allergic Pagan

Pagan
Roots of the Deep Ecology Tree: Neo-Pagans, "The...
The Allergic Pagan

Gathering the Godds: Who's a Part of Your...
We're still in the no-touch pandemic times. Likely for a while to...