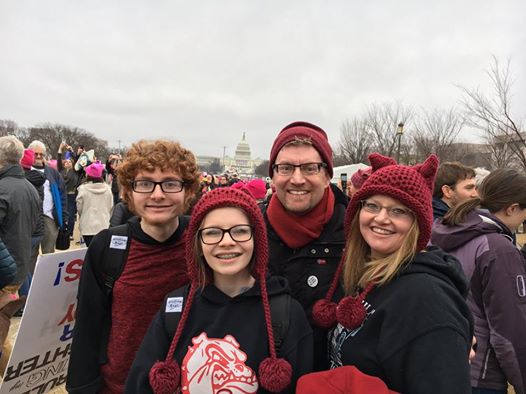 This past weekend, my family — consisting of myself, my wife, my 18 year-old son, and my 14 year-old daughter — joined a half million people in Washington, D.C. for the Women’s March.  It’s been estimated that over 3 million people participated in 500 sister marches around the world.  L.A. had between a half million and three-quarters of a million.  New York had almost a half million.  My own home city of Chicago had a quarter million.  The turnout was historic and unexpected.  All in all, one in every 100 Americans participated.  That’s amazing!  (It’s no wonder our ratings-obsessed President is in denial.) 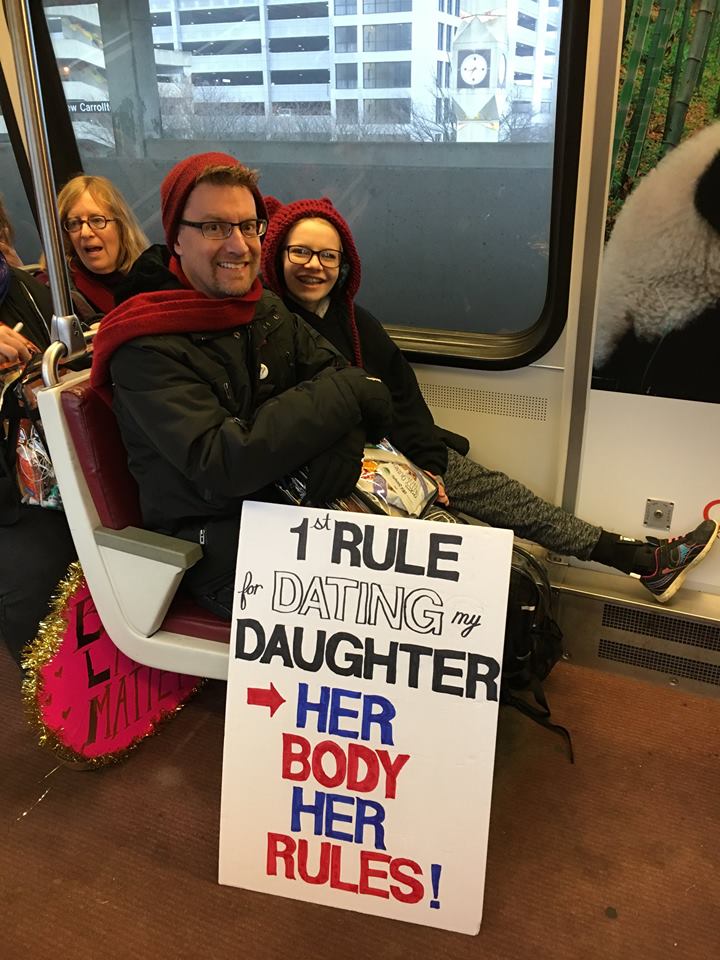 “1st rule for dating my daughter:

On the reverse it read:

“I need feminism b/c

There was an impressive lineup of speakers (although the general sentiment seemed to be that the rally ran far too long).  The most memorable speakers for me were the celebrities, because they really seemed to know how to raise the energy.  America Ferrera, herself a first generation child of immigrants, opened the rally declaring:

“We are gathered here and across the country and around the world today to key, Mr. Trump, we refuse! We reject the demonization of our Muslim brothers and sisters! We condemn the systemic murder and incarceration of our black brothers and sisters! We will not ask our LGBT families to go backwards! We will not go from being a nation of immigrants to a nation of ignorance! We won’t build walls and we won’t see the worst in each other.”

Documentary maker, Michael Moore, gave perhaps the most practical speech of the day, urging people to call Congress every day, to make it a part of our routine. He even gave a phone number:

“The phone number is (202) 225-3121. You call that number any time of the day or night, a human being answers it. There’s an actual 24/7 switchboard. Call that number. If you don’t know who your congressperson is, that’s OK. Just give them your ZIP code. … Each of you have one representative and two senators. They only work three days out of the week, Tuesday to Thursday. If you can’t do it all five days, on those three days, call your rep one day, call your senator the next day, and call your other senator the next day.”

“I am a nasty woman. … I am not as nasty as racism, fraud, conflict of interest, homophobia, sexual assault, transphobia, white supremacy, misogyny, ignorance, white privilege …”

“Tell me, why are pads and tampons still taxed when Viagra and Rogaine are not? Is your erection really more than protecting the sacred messy part of my womanhood?”

“I can’t see. My eyes are too busy praying to my feet hoping you don’t mistake eye contact for wanting physical contact.”

Feminist icon, Gloria Steinam, spoke words which I think many Pagans will appreciate:

“God may be in the details, but the goddess is in connections. We are at one with each other, we are looking at each other, not up. No more asking daddy.”

Scarlett Johansson spoke movingly about her personal experience of going to Planned Parenthood at 15:

“No judgment, no questions asked, Planned Parenthood provided a safe place where I could be treated with gentle guidance.”

Other moving speeches were given by CNN’s Van Jones and Madonna.  And last but not least, Alicia Keys’ performance of “Girl On Fire” was awesome.

So what did all of this accomplish?  That’s what reporters want to know when they cover marches like the Women’s March. That’s the question conservative critics, apathetic moderates, and cynical liberals ask rhetorically.  Here’s 10 things marches and protests accomplish:

1. Marching raises the energy of those who participate in the march. Pagans know something about the importance of raising energy. It’s part of magic, the art of changing consciousness according to will. There’s nothing mystical about this. Raising energy means creating the emotional and psychological potential for action. That’s one thing rallies and protests and marches do: they rouse us, they move us to action, literally. We physically move. There is something powerful — magical — about, in Gloria Steinam’s words, “putting our bodies where our beliefs are.”  Marching is empowering — especially when wearing a pink “pussy hat”!

2. Marching focuses our energy. If the organizers of a march have done their job, they will direct the energy they raise. The organizers of the Women’s March on Washington, for example, have planned 10 actions over the first 100 days of Trump’s presidency. The first action is sending a post card to your Senator. They’ve even provided pre-printed postcards and a tool for identifying your Senator.  This is just one way people are transforming the energy raised at the Women’s March into action.  For example, yesterday and today, many of the marchers gathered at the offices of their elected representatives protesting Trump’s cabinet nominees.

3. Marching fosters solidarity.  The Women’s March brought together those who cared about a wide spectrum of causes: ending violence, reproductive rights, LGBTQ rights, worker’s rights, civil rights, disability rights, immigrant rights, and environmental justice.  All of these causes are interrelated, just as patriarchy, misogyny, white supremacy, racism, xenophobia, capitalism, imperialism, and desecration of the earth are interrelated.  So it makes sense to stand together.  As America Ferrera said at the rally:

“If we do not stand together, march together, for the next four years, then we will lose together.  If we, the millions of Americans who believe in decency, in the greater good, that justice is for all, if we fall into the trap of the separating ourselves by our causes and labels it will weaken our fight and we will lose. But, if we commit to what aligns us, if we stand together, we stand the chance of saving the soul of our country.

4. Marching sends a message to those in power.   It is a way of speaking truth to power. At the rally, Michael Moore said that, when a reporter asked him what he hoped the Women’s March would accomplish, “If you just look that way [pointing out to the crowd], we’ve already accomplished it. … The majority of Americans did not want Donald J. Trump in the White House, and we are here today as their representatives.”  The Women’s March was a vote of no confidence for the President and his administration.

5. Marching sends a message to the people at home. This requires media coverage or use of social media to reach those who did not attend.  And the Women’s March certainly accomplished that (with a little help from President Trump’s denial). 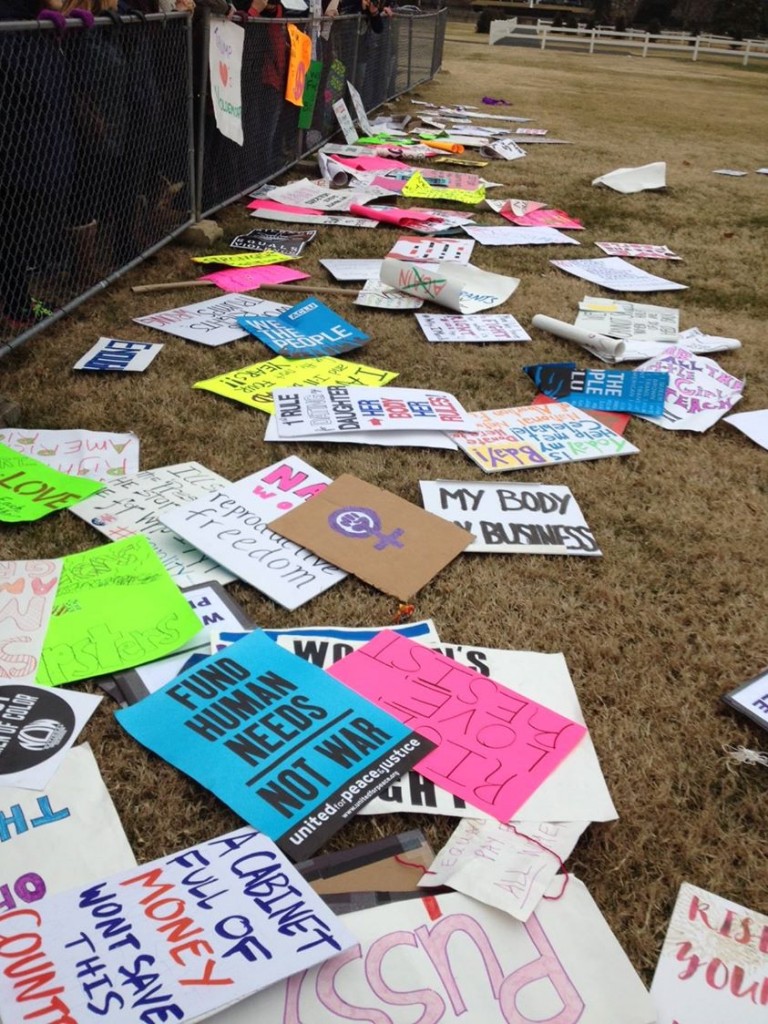 6. Marching provides a container for direct action. Last May, I participated in a rally and march which culminated in a direct action. Forty-one people, including myself, block the entrance to the BP Whiting refinery, the largest tar sands refinery in the country, and were arrested.  As we approached the entrance to BP, crossed the property line, were ordered to leave, and waited to be arrested, having a thousand people at our back singing and chanting made all the difference. There were no arrests at the Women’s March, but there was some direct action.  My daughter joined many of the marchers in her first act of civil disobedience, when she tossed our protest sign over the fence erected in front of the White House.

7. Marching heightens the tension in order to foster change. Some people see marching as a catharsis, a way of blowing off steam. But marching is about raising energy, increasing tension. As Martin Luther King, Jr. explained in his Letter from a Birmingham Jail:

“‘Why direct action? Why sit ins, marches and so forth? … Nonviolent direct action seeks to create such a crisis and foster such a tension that a community which has constantly refused to negotiate is forced to confront the issue. It seeks so to dramatize the issue that it can no longer be ignored.”

8. Marching changes the narrative.  Many people criticize the Occupy Movement for not accomplishing anything.  Any yet, you will hear those some people referring to “the 99%” and “the 1%”.  The Occupy Movement generated a national conversation about income inequality, which has now been taken up by people on both sides of the political spectrum. 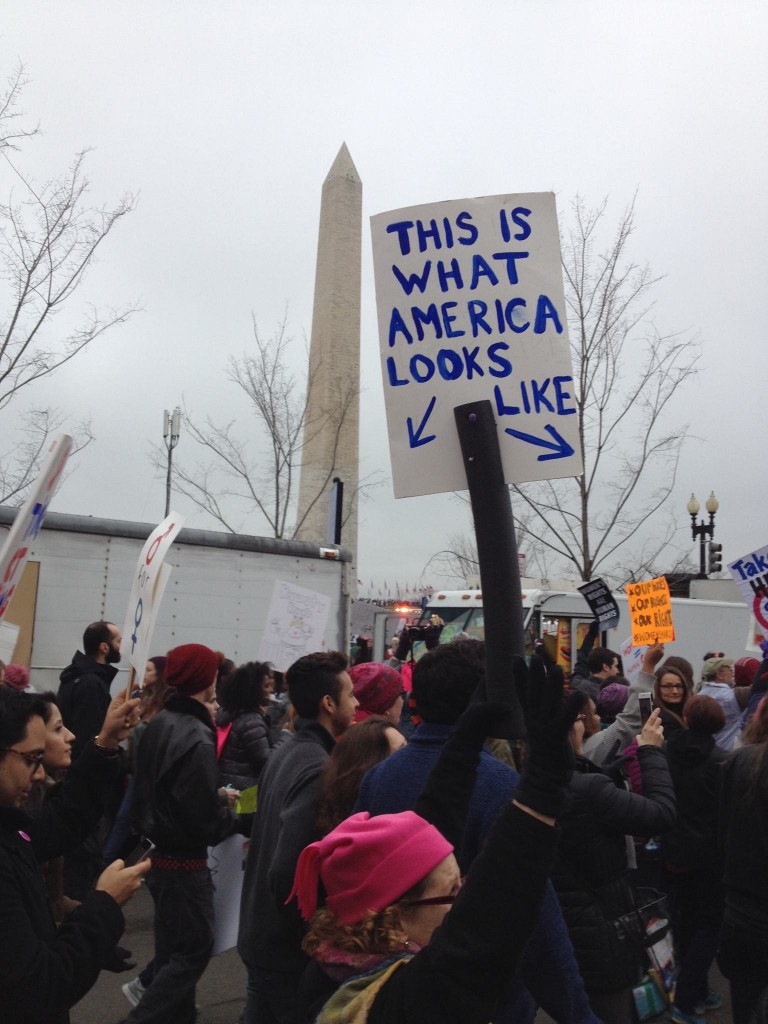 10. Marching is a challenge to people who are doing nothing. Marches piss people off, especially those sitting at home. Progressives marches piss off conservatives, obviously, but they also pisses off apathetic moderates and cynical liberals.  Why?  Because it hits them where they live — literally.  Marching stands as a critique of their inaction.

11. Marching is a provocation. Under the Presidency of a megalomaniac, marching takes on a new meaning. It is a way of baiting Trump. And, predictably, he took the bait “bigly”:

Dear President Trump, we did vote.  We are the popular vote! — which you lost.  And now we are voting with our feet and our voices.