This is the sixth in a series spotlighting some of the signatories to A Pagan Community Statement on the Environment. Today, we are sharing an interview with Venus from South Korea. If you would like to be interviewed for the Global Eco-Paganism Series, contact me at allergicpagan [at] gmail [dot] com. And don’t forget to sign “A Pagan Community Statement on the Environment” at ecopagan.com.

I don’t follow a “religion” — I am lead directly by spirit.  Via channeling I receive direct guidance which I guess I translate through my own awareness and act upon accordingly!  I use dreamwork, astral travel, animal communication and telepathy as ways of collecting clues outside of channeling/speaking with disembodied beings. A lot of my practices reflect paganism and shamanism in many ways.

I’m based mostly in Seoul, South Korea.  Originally from Singapore and Australia.

I would say intensely for the past 5 years since experiencing major shifts in consciousness — but energy work for 10 years opened up my awareness enough to receive those shifts more powerfully.

There are a VERY small group of people who can communicate about these things.  Korea is an originally Confucian society — mostly now switched to Western monotheistic faiths.

There are some, I guess, “modern” style pagans here — those who honor the earth and the spirit world as I do — but I would say I am one of the few.

Aside from 1-1 interactions with certain practitioners who often reach out to me or we share facilitation of one another, not really.  Sometimes I read of others rituals and ceremonies or to seek further info or confirmation of the messages I am getting from Spirit.

What is your religion of origin?  What religion were you raised with?

My mother’s family are devout Muslim, my father’s Christian.  Me — it was really just nature.  Being with the animals and the land itself.

Mostly through suffering, curiosity and contrast.  There have been too many “signs” along the path to ignore.  I grew up with a highly psychic father, heavily into conspiracy theory and What Lays Beneath.  Figured he was going crazy at an early age.  Turns out most of what he babbled on about all those decades ago was right, and is now being brought to the surface.  Spirits have always visited.  Animals have always spoken to me and arrived “out of the blue” no matter where I am.  Nature has always whispered its messages through my body — whether that was an awareness of when earth changes were happening or just where I could help to send healing energies.

When I was 12 years old the entity that occupied my body up until that time left (the body drowned off the back of our yacht on holiday on the Gold Coast) at that time I — the current entity — took over this body. I was then resuscitated with the new entity present. I am what some would call a “walk-in”. The years since that “Death” have been in purging the energetic imprint and memory of what was in my physical body up until that age — including the stories attached to my mother and father’s energy.  In communing with various spirit councils and many of the galactic realm, the origin of my soul has become much clearer.  This is not something I have widely shared.

There has been a prolific shift in consciousness which I believe has allowed me to more courageously embody these skills and allow them to grow more.  When I learned to channel consciously, my life changed. I finally chose to surrender to the Light in making it part of my life work.

Can only resist the calling for so long, right?

It gives me the scope to be everything and cut out nothing.  Everything is possible.  I am not limited by rules.

Meditation.  Taking care of the body through conscious choices in food and people etc.  Ritual.  Gathering other women to facilitate growth and change.  Giving back to the Earth.  Writing and reflection.  Channeling sessions.  Service to others — healing work.  Listening and receiving signs and messages from Spirit.

Magic is the norm.  Synchronicity and “signs” occur daily from guides and others.

No. But I wouldn’t necessarily go around saying that I can do the things I can.  Might end up like the X-men (LOL).   I learned long ago that people can only hear what they are willing to receive.  Give them anything more and it will feel like a million bees stinging their reality from the inside.  I just trust that those who can receive it will come.

The ever-transforming nature of returning to a sense of wholeness.

So far representatives of the community I have come into contact with in the past have been loving and kind towards me — helpful and in-tune.  I have no complaints.  You get what you give, right?

The Earth speaks loudly.  The energy held in that place also replies to our requests.  In order to roll with the awarenesses, I must include these calls also.  To ignore them would be like leaving out a limb and expecting to walk with grace.  I have noticed that the Earth holds the energetic imprint (much like our own earthly vessels) of prior negativity/wars/hatreds/judgments etc.  If a person stays too long in a place like that and has not learned perhaps how to shift the energy for themselves for the better/lighter, it can and will start to impact their health and clarity of mind/emotional wellbeing.  It also appears that certain areas act as “magnifiers” to magic and ritual.  I have come across several gateways that exist in this plane — to access different ones — usually in places considered “holy” or where this energy has sort of collected.

Does environmentalism or other activism play a part in your religion?  How so?

I am encouraged to serve the divine feminine and women in empowering them.  Most of those women have a sensitivity to the Earth and activism, as a personal characteristic.

We are all being called to play our part in giving back to the earth.

Much of it matches my own beliefs and I feel that any energy that comes together with pure and true intention is an intention to contribute to the changes that the earth is experiencing.  If there are more minds and hearts in alignment, more is possible with greater ease.  Thank you for providing the reason for people to contribute their energies!

What part(s) did you find most compelling? What would you have changed?  What other concerns did you have, if any?

The most compelling part of it is the energy behind it.  It speaks louder than the words on the screen.  It is a sign of change and that there are those within many nooks and crannies of this good Earth that are hearing the call within their own hearts to collaborate on change.  We are forever part of a growing conscious community and this I felt when I came across the pledge. 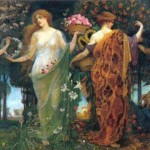 July 19, 2015
Beyond Female Role Models: The Triple Goddess as Nature
Next Post