“Less Christian Than Thou”: Neo-Paganism and Polytheism Beyond the Christian Divide

“Less Christian Than Thou”: Neo-Paganism and Polytheism Beyond the Christian Divide January 14, 2016 John Halstead 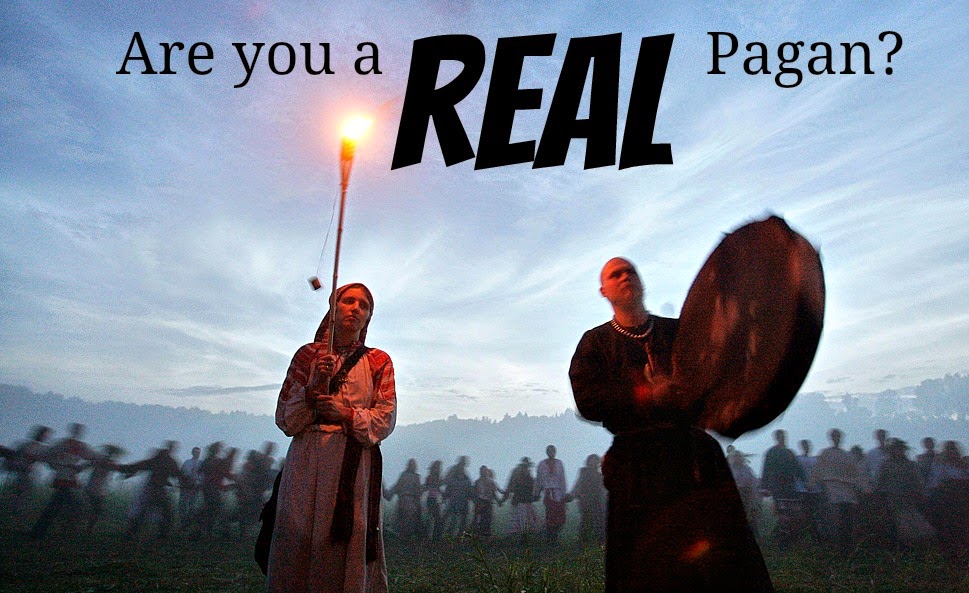 Over the Yuletide holiday, I attended an Episcopalian mass with my father, afterwhich he asked me if I was aware of how the word “Pagan” is understood by Christians.  I think he was wondering why don’t I call myself something less provocative.  I realize that, for some Christians, a self-described “Pagan” is as odd as a self-described “villain”.  The truth is that I call myself “Pagan” because it is provocative.  As I have written previously, “Part of the reason I identify as (Neo-)Pagan is actually because the term is synonymous with irrelegion and hedonism for many Christians …” The notion that the “maypole-dancing, idol-worshiping, and fornicating-in-the-forest non-Christian” is religious — indeed that dancing and fornicating can be part of a religion — is radical all by itself.

In the same way, some witches choose to call themselves because of the counter-cultural connotation.  As Cynthia Eller explains in Living in the Lap of the Goddess: The Feminist Spirituality Movement in America: “For spiritual feminists, being a witch, saying one is a witch, is most often a feminist statement, the symbolic encapsulation of a feminist political program. The witch is the powerful outsider, the despised and excluded person who is threatening the established order.”

Words have power, and calling oneself “Pagan” in our culture is a challenge to the Christian hegemony.  That someone would willingly call themselves “Pagan” flies in the face of a Christianity which presumes to ascribe to itself the whole meaning of goodness and morality.

As Jonathan Woolley recently observed in his essay, “The Matter of the Gods”, “Paganism is diverging.”  On the one hand there are the Neo-Pagans, among whom we may include those Woolley labels “Gaia-theorists, duotheist Wiccans, archetype-channelers, and feminist Mono-theaists”, and on the other hand, there are the Polytheists, those who believe, in Woolley’s words, that “the gods are real, and distinctly so–each a person in their own right, just as we [humans] are, and that believing in them as Actually Extant Beings is, really, okay.”  (For more on this divide, see Tess Dawson’s essay, “Two Winding Rivers: The Changing Face of the Pagan Movement”.   The reason I bring this up is because it’s not uncommon to see folks in these two groups — Neo-Pagan and Polytheist — accusing those in the other group of being “Christian”.

Sometimes this is done with ill intent, and other times not, like when Woolley, a Polytheist, suggests that Neo-Pagan theology is too close to Christian for his comfort:

“If we consider the old theological consensus, what becomes readily apparent is that in many respects, it really isn’t too far removed from the spiritual conventions of the Western world’s established religious orthodoxy. Pantheism and Panentheism have a vibrant life outside of Paganism, and the Goddess has her anchorites even within Christianity and Judaism. Even the duotheism of Wicca arguably puts very little clear water between itself and the distributed godhead of Christianity; instead of a Holy Trinity, we have a Holy Tryst. In short, from a theological standpoint, the first generations of Pagan writing owe far more to lay Catholicism and the New England Transcendentalists, than to anything recognisably pre-Christian.”

I had a knee jerk reaction when I read this, but in all honesty I can’t really disagree with Woolley.  In fact, I’ve written about the influence of Christianity on Neo-Paganism before myself.  (See my posts “My Yule Sounded Alot Like Christmas” and “Waiter! There’s some Christianity in my Pagan soup!”)  Take for example the Neo-Pagan Dying-and-Rising/Horned God and the Triple Goddess, who are all wound up with Jesus and Mary and the Christian Devil.  Pagans are comfortable with the idea that Christian gods were derived from pagan ones, but a good argument could be made for influences flowing in the opposite direction as well.  Michael York has argued in his essay, “New Age and Paganism”, that “contemporary expressions of Neo-paganism are to me more of an updating and rectification perhaps of an essentially Christian attitude which is different from the free-ranging and loosely defined multiplicity of personalities and forces and deities which collectively constitute the [ancient] pagan godhead.”

I remember, some years ago, hesitantly raising the subject with a Polytheist acquaintance of what I perceived as Polytheism’s resemblance to evangelical Christianity, only to be surprised by the person’s unabashed agreement.  “Why would anyone admit to that?” I wondered to myself.  Only now do I realize that while both Polytheists and Neo-Pagans want to distance themselves from Christianity, we have different reasons for doing so.  If the relationship Polytheists have with their gods resembles the relationship of some evangelicals Christians to Jesus, that’s not necessarily something they are embarrassed about.  Similarly, if Neo-Pagan theology tends toward a monism that resembles some forms of Christian theology, that’s not something that necessarily bothers them either.

The truth is that both Neo-Pagans and Polytheists are probably more “Christian” than we’d like to admit — whether we are embracing it or rebelling against it, we are all products of our environment — and that environment is thoroughly Christianized.  This is true on an individual level for many of us who left behind Christianity as our religion-of-origin, but it’s also on a collective level.  As Linda Woodhead has argued (as reported in Jone Salomonsen’s Enchanted Feminism: The Reclaiming Witches of San Francisco), “the ‘new spirituality’ that today flourishes in contemporary western societies [which includes both Neo-Paganism and Polytheism] … is deeply rooted in European Protestantism and has arisen as a response to an increasing dissatisfaction with Christianity …”

At the same time, while both Neo-Paganism and Polytheism are influenced by the Christian milieu out of which they arise, neither can fairly be called “Christian”.  Seriously, would any actual Christian recognize either Neo-Pagan or Polytheist religion as their own?  I doubt it.  There’s probably not a Christian denomination in the world that would be willing to claim any of us.  So what are we doing calling each other “Christian”?

What’s happening, I think, is that both Neo-Paganism and Polytheism are reactions to Christianity, but they are reactions in different directions.  Neo-Paganism is a reaction to Christianity’s transcendental theism, hierarchical metaphysics, dogmatism, textual literalism, patriarchalism, and guilt culture — all interrelated issues.  Polytheism is a reaction to Christianity’s monism and all that it implies — theologically, anthropologically, historically, politically, sexually, etc.  And when Neo-Pagans and Polytheists look back at each other along our different trajectories, it is difficult to appreciate how the other has diverged from Christianity.  Consider the diagram below:

Both Polytheism and Neo-Paganism are, in a sense, post-Christian.  But when we look at one another, all we tend to see is the Christianity we are reacting against.  Christianity looms so large in our collective consciousness, it is hard to see anything else.

So, what does all of this mean?  Well, for one thing, I think Neo-Pagans and Polytheists need to stop comparing one another to Christianity.  It’s just not helpful.  It raises everyone’s defenses and is not conducive to genuine communication.

For another, we need to recognize that these two groups — Neo-Pagans and Polytheists — have fundamentally different issues.  For many Polytheists, monism is a big problem.  While for many Neo-Pagans, literalistic theism or an emphasis on belief are what they find most problematic.  Polytheism and Neo-Paganism don’t just represent different answers to the same question, they represent different answers to different questions.  I think much of the conflict between our two communities might arise from the failure to appreciate that each group is trying to be the answer to a different question.

And to the extent that we are asking different questions, not just offering different answers, I think it is fair to say that Neo-Paganism and Polytheism are different religions, not just different sects or “paths” within the same religion.  This is often obscured by the fact that both groups share an interest in ancient pagan religions (albeit for different reasons) and people in both groups lay claim to the word “Pagan” (albeit for different reasons).  I wonder how many Neo-Pagan/Polytheist arguments might be avoided if we realized that Neo-Paganism has about as much in common with Polytheism as either of them have in common with Christianity.

In many ways, we are living in a Kafkaesque world, where formulating the right question has become more difficult than finding an answer.  As the authors of “Moral Responsibility in the Age of Bureaucracy” write, “The comprehension that we stand at a moral crossroads is not given, but acquired through considerable effort, courage, and even luck. Obtaining that knowledge is a moral challenge coequal to, or perhaps greater than, the challenge of responding to it.”  It’s become platitudinous to say that none of us have all the answers.  But it is equally true that none of us have all the questions.  If we can’t appreciate one another’s answers, perhaps we should begin by trying to appreciate each other’s questions. 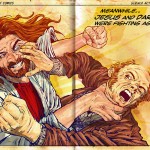 January 1, 2016
I've forgotten why I cared: The irrelevance of (un)belief in the gods
Next Post

January 15, 2016 Simple Answers Have to Be Earned
Recent Comments
0 | Leave a Comment
Browse Our Archives
get the latest from
Pagan
Sign up for our newsletter
POPULAR AT PATHEOS Pagan
1