Why my daughter should have MLK day off

Why my daughter should have MLK day off January 16, 2012 Hesham Hassaballa

My youngest daughter is sick with cold (say it together now: awwwwwwww), and thus we did not send her to her Islamic school today. My older daughter, however, is off today for the Martin Luther King holiday, because she attends public school. The discrepancy irks me deeply.

Me? No such luck. No day off today. My banker did, as did my letter carrier. I, however, did not. In fact, I don’t think I remember clearly when the last time I had his birthday off. We in the medical field do not take it off, except, of course, if you work in a county hospital.

Yet, like said before, the fact that my daughter’s Islamic school does not take MLK day off bothers me. All Islamic schools, except perhaps those established by African-American Muslims, have been built by Muslims who have immigrated to this country from abroad. They, even more than many African-Americans themselves, have benefited from the struggles of the civil rights movement. But for brave Americans like Dr. Martin Luther King, Rev. Jessie Jackson, Rosa Parks, and countless others, immigrant Muslims would not have been able to come to this country, establish themselves economically, live in peace and security, and build those mosques and Islamic schools.

They stood up – endangering their lives in the process – and asked America to cash the “promissory note to which every American was to fall heir… a promise that all men, yes, black men as well as white men, would be guaranteed the unalienable rights of life, liberty, and the pursuit of happiness,” in the eloquent words of Dr. Martin Luther King, Jr.

Their houses of worship – Christian churches, not Muslim mosques – have been, not only attacked, but burned to the ground, sometimes with worshippers still inside. I have never had to sit at the back of a bus because of the color of my skin. I have never had to drink from a different water fountain because I was not white. I did not have to attend a “separate, but equal” school. I have never had to eat at a restaurant whose sign read “Coloreds Only.” I have never had to pay a tax or take a test so I can exercise my constitutional right to vote. They did, however, and they struggled to end this injustice. We eat of the fruits of their struggle each and every day.

We, as American Muslims, have to acknowledge this. We, as American Muslims, would not be worthy of being called Servants of God if we did not acknowledge this. And we must be grateful. This does not mean we should thank every African-American we see on the street. No. Our gratitude must be manifested in our actions. Yes, we must stand up and defend the rights of American Muslims who have been wronged. But, as Senator Barack Obama said, “If there’s a child on the south side of Chicago who can’t read, that matters to [us], even if it’s not [our] child. If there’s a senior citizen somewhere who can’t pay for her prescription and has to choose between medicine and the rent, that makes [our lives] poorer, even if it’s not [our] grandmother.” An injustice committed anywhere in America must be an affront to American Muslims everywhere.

Hesham A. Hassaballa is a Chicago physician and writer. He is the co-author of “The Beliefnet Guide to Islam,” published by Doubleday in 2006. His blog is at godfaithpen.com. This article was originally published at altmuslim.com in 2006. 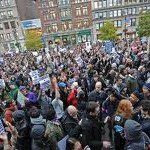 January 27, 2012 Altmuslim is Joining Patheos
Recent Comments
0 | Leave a Comment
Browse Our Archives
get the latest from
Muslim
Sign up for our newsletter
POPULAR AT PATHEOS Muslim
1