Surf the Net = bigger brain (I don’t think so) 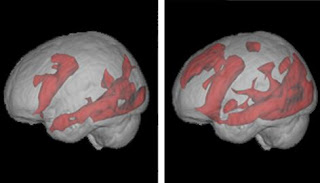 fMRI scans from the USA Today story.
According to new research on aging people, surfing the net could be a way to keep the brain fresh and fleshy, while less techno-savvy elders risk sooner slides into dementia.

All of the volunteers showed significant brain activity during the reading task, which stimulated brain regions that control language, reading, memory and visual abilities.

But during Internet searches, major differences flared up between the two groups, Small says. Only those who had previous Web-search experience registered extensive activity in decision-making and complex-reasoning portions of the brain.

“Our most striking finding was that Internet searching appears to engage a greater extent of neural circuitry that is not activated during reading, but only in those people with prior Internet experience,” Small says.

I find this all just a little bit fishy and would like to hear more before plugging grandpa into a laptop and taking away his reader’s digest. On the one hand they do say that ‘decision-making and complex-reasoning portions of the brain’ were the ones that appeared to be more stimulated in experienced web-searchers on Google. But I’m not convinced that this burst of brain-activity that happens when we pull up the web is 1) a good thing, or 2) likely to lead to lasting brain changes that will reduce chances of dementia. We need a longitudinal study here, folks (now I’m sounding too much like a psychologist and too little like a philosopher… “we need to study the epistemic relation of the subject and the environment” – there, better)…

Consider, for example, throwing grandpa into the middle of a gun-fight. Some decision-making – but probably not complex-reasoning – portions of his brain will light up pretty bright. Put him in a smoky disco with flashing lights and gyrating young people and other parts of his brain might light up even more. But with brain activity, more is not necessarily better. (Some of you may recall I went through -maybe- adrenal fatigue some months ago as a result of various extraordinary stresses in my life. Certain parts of my brain received too much stimulation.)

Secondly, we all know that a well-running brain is built on well-groomed neural pathways. Pathway grooming takes time, repetition, and ‘weight’ (just as building muscles happens over time, with reps and requires weight/resistance). Just because grandpa gets the right burst for the split second when Google loads up doesn’t mean it is going to result in the kind of sharp-witted seniors we all love and admire.

So – while this is interesting, I have to put on my skeptics hat for now. And while I will happily breeze through hundreds of web-pages in the next four hours, I’ll rest happily knowing that grandpa has his reader’s digest.