Back from China August 11, 2009 Justin Whitaker 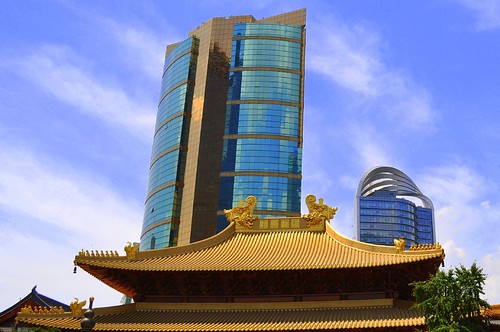 This will be the first in a series of posts about my recent trip to China. Three weeks: the first spent in and around Shanghai (above photo is at Jang’an Temple in the heart of the city), and the next two weeks spent in Xi’an (previously Chang’an), the former capital of China and heart of the early Buddhist transmission to the country.

I am quite tired from my travels still, so for now I would like to simply frame the content of what is to follow. That is the purpose of the simple title above, “China: Old and New.” The country is a living rubber band, stretched in one direction toward progress, growth, innovation, and improvement, and in the other direction of reverence toward its ancient wisdom, embodied foremost in its three traditions of Daoism, Confucianism, and Buddhism.
The Cultural Revolution destroyed much of both of these. On the progress side, it saw the deaths and detainments of countless brilliant academics and innovators who were not interested in serving state demands.  At the same time, the Cultural Revolution promised a new era of “peasant rule,” free from the imperialist bondage of all religious dogma. Today, as China’s wealth grows at an astounding rate, so too is its recognition of the importance of historical roots.
The government is actively building (or at least supporting) giant Buddhist “Mega-Churches” and tourist attractions while highly devout and accomplished monastics both wait for greater freedom in the shadows of such monstrosities and actively grease the wheels of the Communist machine in the name of spreading the Dharma.
On our journey we met many such monastics as we traveled from the mountain-top hermitages where meditation seats were literally carved out of the rocks, to those very “Mega-Churches” of contemporary Chinese Buddhism. We met abbots and vice-abbots of over a dozen temples, many of them the founding temples of modern schools of Buddhism: Huayan (Avatamsaka), Shingon, and more.  We also witnessed in the filthy air, ubiquitous construction projects and congested traffic, the birth of a new China, a China whose fate and identity are still very much in question…

August 14, 2009 China: Amazing People
Recent Comments
0 | Leave a Comment
"I've read that borderline persons have a high sense of fairness and BPD is soooo ..."
steven solomon Borderline Personality Disorder and Buddhism (IV)
"I came across this site by accident, It reminded me of a story about two ..."
quacknduck Tourists: Buddha Tattoos are Taboo; as ..."
"eMudhra Limited is a certified body, licensed by the Government of India. eMudhra operates in ..."
Mycaportal Buddhism: Dzogchen and Mahamudra
"folks hav to learn the local laws wen they invade the space"
Joe Biggs Tourists: Buddha Tattoos are Taboo; as ..."
Browse Our Archives
get the latest updates from
American Buddhist Perspectives
and the Patheos
Buddhist
Channel
POPULAR AT PATHEOS Buddhist
1