Exercise and the Brain

Exercise and the Brain May 25, 2011 Justin Whitaker 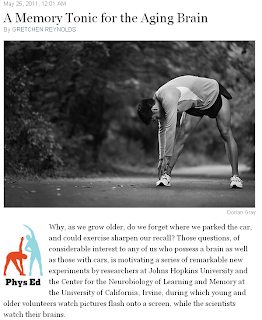 The New York Times’ Gretchen Reynolds reports today that researchers have found a strong link between exercise and promoting memory in aging brains.

While aging tends to lead to a decline in memory-skills, there is a way to stave this off, according to Dr. Michael A. Yassa, lead researcher in the study:

“Exercise is one of the things that might directly change this process,” he said. In other experiments, exercise has been found to jump-start neurogenesis, or the creation of new brain cells…”

“What I’d say for now is that you can’t go wrong by exercising,” he said. “We don’t know if it can reverse” any damage if you already have memory slips. But there are indications that it might slow or possibly prevent memory deterioration, if you begin exercising early enough — meaning that, among the many benefits of a health club membership, your workout may help you to recall where in the gym parking lot you left your car.

As an avid runner and occasional yogi (at one time quite avid) – and a human being who cares about the world today – I think such research is important for a number of reasons. For one thing, America, and other developing/developed counties are getting horribly overweight, which tends to be accompanied by health issues, including at times mental health issues. Weight is a complex issue – in fact I would need to lose about 20 pounds to be considered “healthy” by US Government standards (So would Bruce Willis, George Clooney, and Matt Damon). And while those guys stay active by punching the faces of bad guys and chasing beautiful actresses and Italian models, I’d argue that we’re all in okay shape.

But a lot of people aren’t. Modern society promotes a very sedentary lifestyle. It’s up to us to undermine that by getting out somehow to exercise.

Second, I’m very interested in brain-body connection, especially correlations between mindfulness, athleticism, and happiness. Having suffered horrible depression in my late teen years and into my 20s, I’m always keen to find links to ensuring a happier future (or at least a stable one). Exercise has been a great part of my happiness over the last half-decade or so, and seeing that it also benefits other parts of the brain (here memory) simply adds another good reason for me to finish this post and get out on a run with Penny, our new lab.

Thirdly, I know habits we acquire now carry on with us through our whole life. Another recent article, this one from the L.A. Times, asks, “Why are unhealthy people so reluctant to change their lifestyles?” A healthy 60 year-old didn’t get started at 59, or even 50, most of the time. To be healthy at 70, you need to be healthy at 20, 30, and so on. Sure, there’s always a chance to turn it around later, but will you? The force of our habits, built up over years, can overwhelm even the best of intentions (New Years Resolutions, anyone?).

Okay, enough for now. Go exercise. And study some Pali while you’re at it 🙂

May 26, 2011 New Kadampa Survivors
Recent Comments
0 | Leave a Comment
"I've read that borderline persons have a high sense of fairness and BPD is soooo ..."
steven solomon Borderline Personality Disorder and Buddhism (IV)
"I came across this site by accident, It reminded me of a story about two ..."
quacknduck Tourists: Buddha Tattoos are Taboo; as ..."
"eMudhra Limited is a certified body, licensed by the Government of India. eMudhra operates in ..."
Mycaportal Buddhism: Dzogchen and Mahamudra
"folks hav to learn the local laws wen they invade the space"
Joe Biggs Tourists: Buddha Tattoos are Taboo; as ..."
Browse Our Archives
get the latest updates from
American Buddhist Perspectives
and the Patheos
Buddhist
Channel
POPULAR AT PATHEOS Buddhist
1