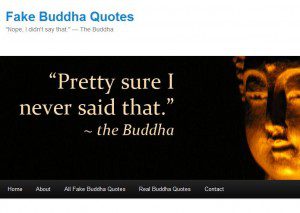 My friend and my first meditation teacher, Bodhipaksa, has a great site that while not new, might be new to you – I blogged about it a couple years ago here. The premise is simple: to find and rectify Fake Buddha Quotes as much as possible.

And Confucius says: people like to misquote Buddha. My suspicion is that the whole meme is somewhat of a continuation of the old (70s? 80s?) meme based on the lovable Chinese philosopher Confucius – recent examples still continue. Of course the two don’t completely overlap. Confucius is witty and clever; he plays on words, “He who stand on toilet… is high on pot.”

The Buddha quotes, on the other hand, are usually related to virtues associated with Buddhism: patience, perseverance, loving-kindness, restraint, and so on. Some of them are misquotes that arise from with in the tradition. Many are general platitudes and self-affirmations (favorites of the “spiritual but not religious” crowd, no doubt – we have a book for you). And many more are odd translations of the early texts, often importing Western religious language that doesn’t fit the Buddhist context, e.g. the most recent, “The greatest prayer is patience.”

Bodhipaksa does us all a great service in pointing these out and tracking down their origins. The fact is, as much as Western/American Buddhists are in love with the Kalama Sutta, the reliance on authority is still a pervasive factor in most people’s lives. And just as it’s important to know just what Einstein said when we’re trying to understand his teachings on physics, it’s very important to know what the Buddha really said if we wish to understand Buddhism.

Perhaps Einstein is not the best example. After all, if we believed that E = mc³ instead of E = mc² it wouldn’t be such a big deal, would it? But I think the lesson here is that the Buddha taught a path – a complex one and in different ways at different times, but nonetheless a path. If the Buddha said, “take two lefts up ahead and then go straight until you reach x.” It does us no service to quote him as saying, “just chill and be your own best friend.”

And perhaps again, the better question might be whether the Buddha can be reduced to cute quotes at all? Does the Buddha belong on twitter? Even if we translate/represent him correctly? (Full disclosure: I have a number of bits and pieces of Buddhism that I like to tweet.) Perhaps the wisdom of Buddhism was and always is a matter of student to disciple connection – as is often heavily emphasized in Zen and Tibetan traditions.

My own take is that yes, we CAN take bits of the early Buddhist teachings and tweet/fb/G+ them or actually discuss them with friends in real life. The key is understanding the context as much as we can. And of course, quoting as faithfully as we can. It helps to know some Pali. It helps to study the context of the Buddha’s teachings.

As such I think Bodhipaksa’s efforts are worthy of our praise and emulation if and as we can.

September 13, 2012 Are Western Buddhists Too Tolerant?
Recent Comments
0 | Leave a Comment
"Well explained. Dholavira is also one of the largest site of Indus Valley civilization. It ..."
Kirti Bajaj Major Sites of the Indus Valley ..."
"Nice write up Justin."
Catalin Newport In Hong Kong, the Bodhisattvas wear ..."
"I used to idealize Tibetan Buddhism. I studied with some senior teachers from Shambhala and ..."
Metis Buddhism, patriarchy, abuse, and violence: we ..."
"its almost as if yoga can't be associated with hinduism, it's like a taboo for ..."
edl Can Western Appropriation of Buddhism, Mindfulness, ..."
Browse Our Archives
Follow Us!