Dharma Dialogue: a new blog on Buddhism in America 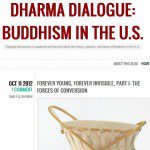 Dharma Dialogue, a blog created at the University of the West, promises to be a great addition to the tiny niche of blogs at the intersection of academia and Buddhism in the U.S. At just one month old (or so), the blog only has four articles, but I’m guessing that the number and quality will increase greatly as the semester progresses.

From the ‘about’ page, the blog is described as:

Beyond the Ivory Tower

This blog begins as a discussion space for a graduate-level course about Buddhism in the U.S.  However, we hope it will become a public space for discussing the past, present, and possible future of Buddhist history and practice in the United States.  This course is being taught by Dr. Jane Iwamura at University of the West in Rosemead, California.  Dr. Iwamura and her students will be posting here regularly about topics being raised in the class.  Comments are welcome and encouraged both from enrolled students and the general public.  Please, tell us what you think!  What does Buddhism in the U.S. look like to you?

There is also a reading list (shared by the students) and some guidelines. One of the things I noticed that was unfortunate is the anonymity of the people creating each post. It would be nice if each person gave, if not their name, then at least some background, for example: “authored by “Tim,” a 27 year old Ohio native, world traveler, and former business student who is now a Tibetan practitioner (of 4 years) and studying chaplaincy at U West.”

The earliest post deals with the Buddha’s views on God, and while it touches on a sutta or two, it basically expresses the author’s frustration with Westerners (lack of) understanding when it comes to the Buddha and the complex pantheon of Brahmanic gods. I understand the frustration. Gods appear throughout the early Buddhist canon, but you have to read a lot of it to begin to get an idea of what the Buddha thought of god, or the gods. But you not only have to read the suttas, you have to develop a way of interpreting them. There is a playful quality to some of them that can be missed when you read them literally (though some commentators deny this). There is one, for instance (I don’t recall where it is of hand, please comment if you know) in which a man asks “where is the end of everything?” to successive levels of gods, each sending him ‘up’ to higher (and supposedly wiser) levels. Finally the highest God, after a pause, sends him to ask the Buddha. There is also the Tevijja Sutta, DN 13, wherein the Buddha teaches two young Brahmins how to “dwell with Brahma” (by leaving their former path and following his teachings on ethics and meditation). Here the Buddha doesn’t demote the god or replace it so much as change its meaning to fit his own teachings. So you won’t get anything definitive from just one or two suttas, and you shouldn’t trust anyone who points to any sutta as the definitive view of the Buddha (on pretty much anything).

I enjoyed the post on jhanas – having been told once not to get ‘addicted’ to them once myself. The author of this post does a good job of defending the legitimacy of jhanas against mostly contemporary Western Buddhists who worry that the pleasant feelings associated with them can lead to clinging, thus defeating the purpose. The author also does a good job of giving the historical context that explains some of this worry, in effect demystifying some of the changes that have occurred in Asia (specifically Burma) over the past hundred or so years.

The best (and most recent) posts come in a two part series on the study of Buddhism in America: one on cradle-Buddhists, and the other on “night-light” Buddhists. The first of these is great, describing the absence of discussion of children and families in scholarly writing on Buddhism in America – at least until we read that these are part of the “power-laden representations that dominate the “American” hegemonic understanding of Buddhism in the United States.” This comes, both literally and metaphorically, out of left-field. And it continues like this for a while:

These representations are absolutely normative. While they are presented as facts, they are designed to shape (or create if necessary) a “Buddhism” as it should be (as preferred by some), a “Buddhism” that reinforces the power of particular groups and individuals.

One has to be very careful when one is accusing scholars of shaping (or creating) their object of study. One has to be even more careful when accusing them of doing so in order to “reinforce the power of particular groups and individuals.”  If such accusations were true of just one academic in just one book or article, it could be devastating to his/her career. I’m afraid the post continues with this train of thought for a while, perhaps right of the metaphorical cliff:

Since hegemonic structures support themselves with illusions and fictions (in fact, their logic is predicated on using sleight-of-hand in addition to a closed fist to make lies appear to be true), it is not always easy to discern their inner workings. Normally, one might ask “who benefits from these structures?” In this case, a close examination of the common themes within the points above provides a unique glimpse of the foundation of this particular hegemonic structure, a dominating and dominant representation we might term “American Buddhism.”

The post does go on from there to make some good points worth reading. The second part of the series likewise carries on with these good points, but with some of the same problematic (conspiratorial?) slant as the first post. Overall they are great posts though, indeed the best so far, and the zeal in them is itself commendable. But if you’re going to call out most if not all of the top scholars in a field for “illusions and fictions” – be careful – and be prepared to present pages and pages of evidence. But again, as a student-led blog, one shouldn’t get too worked up. Enjoy what’s there and keep an eye out for more excellent and thought-provoking work to come.

October 12, 2012
Despite Buddhist Beliefs: The world is becoming more peaceful
Next Post

October 15, 2012 A delicate blend of science and art (photography)
Recent Comments
0 | Leave a Comment
Browse Our Archives
get the latest updates from
American Buddhist Perspectives
and the Patheos
Buddhist
Channel
POPULAR AT PATHEOS Buddhist
1