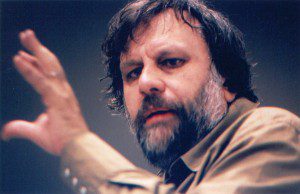 Žižek, what can I say?

He’s at it again.

Last month Žižek was in Vermont, not far from where the Dalai Lama himself was giving a talk on his latest US tour. His topic: “Buddhism Naturalized” (video below). At least that was the title of the talk. In fact he only talks about Buddhism for about a quarter of the talk. The rest, while interesting, is a bit all over the place.

And while he twice notes his appreciation for Buddhism, especially Zen, which he calls the most honest form of Buddhism, I would caution anyone from taking him as an expert – or even genuinely knowledgeable – on the topic. He cites some authors here and there and says “I’ve had debates with Buddhists, and they have admitted… so I’m not bullshitting here” (58:20). He doesn’t ever say what exactly Buddhists have admitted, instead going into “refuting” the Buddhist theory (or giving his problem with it) that all beings want to avoid suffering.

Some people seem to want to suffer. Ergo Buddhism is wrong?

He then describes Mahayana Buddhism as “to put it very naively… for me the source of evil.” (this is before he credits Zen for its honesty)

Why is Mahayana evil? Because it introduces the notion of the Bodhisattva, one who has attained awakening, but “he decides… out of sympathy… to return to our valley of the earth. He postpones his final salvation, so that… he returns here to help others find salvation.” (jump to 1:00:00 for this)

He says this deviates from the prior “radical” Buddhist message of awakened beings being in the world and introduces the idea of nirvana as meaning that “you go somewhere else, out.”

— We can pause here and just suggest that Zizek seems to be relying on very poor understandings of Buddhism, either derived from 19th century Christian missionaries or interpreters (academics have avoided talk of ‘salvation’ in Buddhism for some time now), or cherry-picked from recent works. His discussion of Zen, drawing here and there from Brian Victoria’s Zen at War (not mentioned in this talk but he discusses it elsewhere), suggest the latter.

There are plenty of points at which one could thoughtfully criticize Buddhist thought and Buddhists, but this supposed metaphysical mistake isn’t a very good one.

Žižek also criticizes Buddhism (at 1:03:50) for trying to argue for the necessity of elementary ethical training (anyone familiar with the 3 or 8-fold path will probably think of these here). He claims that this is “up to a point, true” and goes on to discuss Buddhism in the West as primarily about meditation and Buddhism in Asia as more about ethics. This point is true and has been observed by scholars and practitioners for a few decades now. But he says that many people (who?) are questioning the necessary link between ethics and awakening – and he says he agrees. This is where he cites his admiration for Zen’s honesty. He quotes (or paraphrases) D.T. Suzuki (a person that academics are cautioned to be very wary of for his mixture of Western philosophy with Zen in his efforts to popularize Zen in the West) as saying that Zen is “just a technique” and nothing more. One can do Zen and be a fascist, totalitarian, capitalist, etc.

This may have served Suzuki well in his efforts in the 20th century, but it doesn’t do service to the centuries of actual practice of Zen in Japan. Absolutely, there is antinomianism in Zen (and Hua-Yen) thought. You can listen to a wonderful discussion of this by Buddhist scholar Jin Park here. But it is also true that Zen Buddhists have been interested in the necessity of certain types of behavior to help bring about awakening.  Steven Heine has a really wonderful essay in the collection of works in honor of Charles Prebish: Buddhist Studies from India to America, called “Dōgen and the precepts, revisited” where he discusses the importance, and indeed the necessity, of proper reception of precepts in early Zen history. The fact that is most telling in the essay is the discussion of the Daruna or Bodhidharma School of Zen, which openly flaunted its antinomianism and disregard for ethics. That school did gather some following, perhaps with the help of a charismatic teacher, but it died out, nearly without a trace, in the 15th century.

In any case, as with so many things, the reality is much more complicated than Žižek would like to let on. And his use of Suzuki as the exemplar of Buddhism, let alone Zen, is deeply flawed.

I could go on. But I’ll just say that if you find him entertaining, okay. If you like his social criticism or his taste in movies, great. But please, please, please, do not listen to him as an authority on anything Buddhist (unless that is the tiny 1-2% of Buddhists, especially in the West, who might actually believe in and behave as Žižek describes). He zeroes in on anomalies and then presents them as the norm.

Finally, one other thing that caught my ear was around 1:23:20, where he says that the FBI blasted recordings of Tibetan horns (you know, those long ones with the deep monotone) at the Branch Davidian compound in Waco in the 1990s, as if it were the key to terrorizing people and represented the “dark side” of Buddhist spiritual power. This is patently false. Although the horns may have been included in the various sounds blasted at the compound, they were not mentioned at the wiki article about it, which states:

Increasingly aggressive techniques were used to try to force the Davidians out (for instance, sleep deprivation of the inhabitants by means of all-night broadcasts of recordings of jet planes, pop music, chanting and the screams of rabbits being slaughtered).

And if you go here: https://www.youtube.com/watch?v=bTg7Y9YJXR4 – you can watch a 2-hour documentary on the siege, where it is mentioned that in fact Nancy Sinatra songs (go to 1:14:40) were blasted at the Davidians, along with some of the other sounds mentioned in the wiki article. So here Žižek is pulling a ‘fact’ out of thin air – one which is either false or in need of great clarification – and making a point based on it.

The fact that Žižek discusses about 200 different topics in his 90 or so minutes makes it difficult to try to refute or clarify all of them. For instance I’m happy to let him get away with his psychoanalysis of the Torah, but I’m not sure a Jewish or Biblical scholar would be so charitable there. As for Sex, Gangnam Style, Justin Bieber, and the Pope, well, you be the judge.

November 5, 2012 Buddhists in the News and News for Buddhists
Recent Comments
0 | Leave a Comment
"I've read that borderline persons have a high sense of fairness and BPD is soooo ..."
steven solomon Borderline Personality Disorder and Buddhism (IV)
"I came across this site by accident, It reminded me of a story about two ..."
quacknduck Tourists: Buddha Tattoos are Taboo; as ..."
"eMudhra Limited is a certified body, licensed by the Government of India. eMudhra operates in ..."
Mycaportal Buddhism: Dzogchen and Mahamudra
"folks hav to learn the local laws wen they invade the space"
Joe Biggs Tourists: Buddha Tattoos are Taboo; as ..."
Browse Our Archives
get the latest updates from
American Buddhist Perspectives
and the Patheos
Buddhist
Channel
POPULAR AT PATHEOS Buddhist
1